It's strange to think about, but there is a point in human history at which you can divide all of the inhabitants into two categories: those who left no living descendants at all, and those who are the ancestors of every single person alive today.

Anthropologists differ as to when that date is, but it's probably more recently than most of us would guess.  It certainly happened after the Toba bottleneck, a point about 74,000 years ago when there was a massive eruption of the Toba volcano (in the Indonesian archipelago) and a worldwide climate impact that may have reduced the entire population of ancestral humans to fewer than 7,000 total.  (Nota bene: scientists are still debating how big the bottleneck was, and whether it was the volcano that actually caused it; but I'm referring to the event by its most common nickname even so.)

What's cool is that with our current ability to do genetic analysis, we can narrow in on the answers to these sorts of questions.  Just last week, some research was published in Cell giving us an interesting lens into settlement patterns in Spain -- and that only 4,500 years ago, an influx of people from Eastern Europe and Russia resulted in the replacement of nearly all of the Y-chromosomal DNA that had been there for the previous forty thousand years. 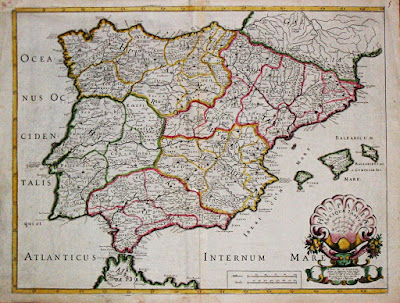 This doesn't mean that the previous inhabitants left no descendants (although that could be true) -- all we can infer with certainty is that the men who had lived there prior to the invasion left very few patrilineal descendants.  As Y-chromosomal DNA is passed only father-to-son, any male descendants a man has through his daughters would share none of his Y-DNA.  (The same is true, but with the opposite genders, about mitochondrial DNA, which is only passed through the maternal line.)

In "Survival of Late Pleistocene Hunter-Gatherer Ancestry in the Iberian Peninsula," by Vanessa Villalba-Mouco, Marieke S. van de Loosdrecht. Cosimo Posth, Pilar Utrilla, Johannes Krause, and Wolfgang Haak, of the Max Planck Institute for the Science of Human History working with the University of Zaragoza, the authors write:


The Iberian Peninsula in southwestern Europe represents an important test case for the study of human population movements during prehistoric periods.  During the Last Glacial Maximum (LGM), the peninsula formed a periglacial refugium for hunter-gatherers (HGs) and thus served as a potential source for the re-peopling of northern latitudes...  Western and central Europe were dominated by ancestry associated with the ∼14,000-year-old individual from Villabruna, Italy, which had largely replaced earlier genetic ancestry, represented by 19,000–15,000-year-old individuals associated with the Magdalenian culture.  However, little is known about the genetic diversity in southern European refugia, the presence of distinct genetic clusters, and correspondence with geography.  Here, we report new genome-wide data from 11 HGs and Neolithic individuals that highlight the late survival of Paleolithic ancestry in Iberia, reported previously in Magdalenian-associated individuals.  We show that all Iberian HGs, including the oldest, a ∼19,000-year-old individual from El Mirón in Spain, carry dual ancestry from both Villabruna and the Magdalenian-related individuals.  Thus, our results suggest an early connection between two potential refugia, resulting in a genetic ancestry that survived in later Iberian HGs.  Our new genomic data from Iberian Early and Middle Neolithic individuals show that the dual Iberian HG genomic legacy pertains in the peninsula, suggesting that expanding farmers mixed with local HGs.

A different study, also published last week in the journal Science, added another piece to the puzzle.  "The Genomic History of the Iberian Peninsula Over the Past 8000 Years," by a team of scientists far too lengthy to list working at over a dozen research institutions, examined the DNA of 271 individuals and came to some fascinating conclusions about the settlement of Spain:


We assembled genome-wide data from 271 ancient Iberians, of whom 176 are from the largely unsampled period after 2000 BCE, thereby providing a high-resolution time transect of the Iberian Peninsula.  We document high genetic substructure between northwestern and southeastern hunter-gatherers before the spread of farming.  We reveal sporadic contacts between Iberia and North Africa by ~2500 BCE and, by ~2000 BCE, the replacement of 40% of Iberia’s ancestry and nearly 100% of its Y-chromosomes by people with Steppe ancestry...  Additionally, we document how, beginning at least in the Roman period, the ancestry of the peninsula was transformed by gene flow from North Africa and the eastern Mediterranean.

This influx pushed the Iberian farmers, who before had occupied the entire peninsula, into the mountainous northeastern parts of Spain -- and they are, apparently, the ancestors of today's Basque people, who are not only genetically distinct but who speak a language thought to be unrelated to any other existing language.  "The Basque country is a really difficult place to conquer; there are quotes from French rulers in medieval times saying that this is a nasty place to get in an army," said population geneticist Mattias Jakobsson of Uppsala University in Sweden, who was not part of either of the present studies.

Iñigo Olalde, a postdoc in the lab of population geneticist David Reich at Harvard Medical School in Boston, who is himself Basque, and who participated in the second study, agrees.  "The present-day Basques look like Iron Age people from Iberia," Olalde said.

What I find most fascinating about this is how we can use genetic analysis as a lens into a time period from which we have no written records at all, and make inferences about the movements of people who before had been entirely a mystery.  There's a lot we still don't know, of course, including how this genetic replacement took place.  "It would be a mistake to jump to the conclusion that Iberian men were killed or forcibly displaced," Olalde said, "as the archaeological record gives no clear evidence of a burst of violence in this period."

This opens up the potential for using this technique to study other time periods that are historical enigmas -- like the European "Dark Ages," between the Fall of Rome and consolidation of the Holy Roman Empire with the crowning of Charlemagne in 800 C.E.  Amazing that genetics, which tells us about who we are here and now, can also be seen as a history of where we came from -- a continuous record of information back to our earliest ancestors.