I'm a firm believer in the idea that most people, most of the time, are trying as hard as they can to do the right thing.

Yes, we often differ about what that right thing is.  Yes, sometimes we try and fail.  But my point is, we are usually working to do the best we can for ourselves and our loved ones.

There is a minority of people who, to put it bluntly, are assholes.  These are the people who can't stand it if others get recognition, are furious when their pet ideas turn out to be wrong, or are simply spiteful and nasty.  And that ugly minority can, unfortunately, be extremely loud at times.

Look at what happened last week to Dr. Katie Bouman, the astrophysicist who spearheaded the project to generate the world's first actual photograph of a black hole.

You'd think that anyone with a scientific bent would have been thrilled, both for her and because of the extraordinary image she helped create.  And honestly, most of us were.  But there was a handful of trolls who couldn't stand the fact that she was getting accolades for her work -- and that she showed great modesty in highlighting the work of the rest of her team.

"No one algorithm or person made this image," Dr. Bouman wrote.  "It required the amazing talent of a team of scientists from around the globe and years of hard work to develop the instrument, data processing, imaging methods, and analysis techniques that were necessary to pull off this seemingly impossible feat.  It has been truly an honor, and I am so lucky to have had the opportunity to work with you all."

So said trolls decided that this was Dr. Bouman's way of admitting she really hadn't had much to do with the research, and set out to destroy her reputation.

Fake Twitter accounts and YouTube channels started popping up, all with the aim of casting doubt on her role in the project.  Many of them focused on her colleague Andrew Chael, who it was implied had done nearly all the research, which was then swiped by Bouman.  Chael himself was having none of it; he posted on Twitter a complete disavowal of the claim, and a demand that the attacks on Dr. Bouman stop. 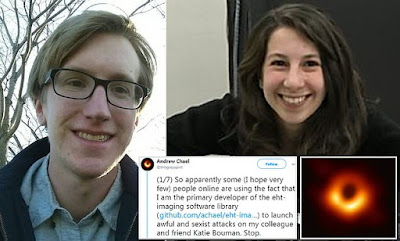 The trolls then created a fake account in Chael's name and accelerated the nastiness.

Nota bene: if your opinion about something is on such shaky ground that in order to get people to believe it, you have to create a fake Twitter account, impersonate someone else, and then lie outright, you might want to consider whether you're right in the first place.

Twitter, to its credit (a credit that it must be said it often doesn't deserve), pulled the fake accounts as fast as it could, but not before there were thousands of people who had followed them, and tens of thousands of times that the false messages had been retweeted.  As with most false claims, it's damn hard to fix the damage once the claim is out there, regardless of how many times it's debunked, retracted, or deleted.  Witness the ongoing anti-vaxx idiocy, due largely to Andrew Wakefield, whose "studies" were withdrawn and whose work has been shown to be worthless.  Witness "chemtrails," whose genesis was due to a misquoted number on a Louisiana news broadcast.  Witness the ten thousand (literally) public lies Donald Trump has uttered in the last three years.

Undoing all that would be about as easy as putting toothpaste back into a tube.

As far as why anyone would be such a complete dick as to attack Dr. Bouman, most people are attributing it to sexism -- that the trolls couldn't believe that a woman had made such an achievement, and set out to prove that she'd relied on her male colleagues and then stole their glory.  Sadly, this explanation for the trolls' behavior is entirely plausible.  Despite considerable advances, it's still difficult for women to succeed in science.  Consider the 2017 study that showed teams led by women only receive 7% of the total grant money allocations, and a team led by a woman receives on average 40% of the money that a similar project receives if led by a man.  These figures are appalling, even if you take into account that only 17% of working scientists in physics and engineering are female -- the fields with the lowest diversity.

Which is itself appalling.

So this disgusting episode is yet another reason to be careful about what you believe online.  Double, triple, quadruple-check your sources before you pass along links.  That is especially true if the link supports something you're already inclined to believe; we all fall prey to confirmation bias.

Despite all this, I still think that humanity is, in the majority, good.  But being good means you speak up against the ugly minority who are determined to attack, demean, and degrade others.  Defeating the trolls takes an effort by all of us.  To paraphrase Edmund Burke (the paraphrase is to remove the sexist verbiage, the irony of which does not escape me): "All that is necessary for the triumph of evil is that the good do nothing."