Snapshot of a very bad day

Some of you have probably bumped into articles in the last week or so about a phenomenal discovery in paleontology -- a fossil bed in North Dakota that may have been created the day the Chicxulub Meteor Strike occurred, 66 million years ago.  This single event is thought to have flash-fried everything in the southern half of what is now North America, changed climates worldwide, and was the death blow to the dinosaurs, with the exception of the lineage that led to modern birds.

The deposit contains exquisitely preserved remains of a variety of fish, plants, dinosaurs, and mollusks.  The gills of the fish contained huge numbers of tektites -- tiny spheres of glass formed during a meteorite collision and ejected into the atmosphere.  The impact is thought to have caused a magnitude 10 earthquake (almost unimaginable to me), which took the shallow ocean that crossed what is now the central United States and "agitated it like a washing machine" -- creating a seiche, a standing wave like the sloshing of water in a giant bathtub.

The seiche caused the repeated exposure and inundation of shallow regions, and while exposed, the stranded animals were subjected to a rain of tektites and other debris thrown up by the collision.


"This is the first mass death assemblage of large organisms anyone has found associated with the K-T boundary," Robert DePalma, curator of paleontology at the Palm Beach Museum of Natural History in Florida and a doctoral student at the University of Kansas, said in a press release.  "At no other K-T boundary section on Earth can you find such a collection consisting of a large number of species representing different ages of organisms and different stages of life, all of which died at the same time, on the same day." 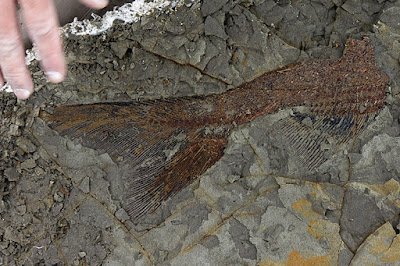 One of the fish from the Hell Creek fossil bed

"The seismic waves start arising within nine to ten minutes of the impact, so they had a chance to get the water sloshing before all the spherules (small spheres) had fallen out of the sky," said Mark Richards, professor emeritus of earth and planetary science at the University of California - Berkeley.  "These spherules coming in cratered the surface, making funnels — you can see the deformed layers in what used to be soft mud — and then rubble covered the spherules.  No one has seen these funnels before...  You can imagine standing there being pelted by these glass spherules.  They could have killed you."

It's amazing to think that if these scientists are correct -- and the consensus amongst paleontologists is that they are -- we're seeing a remnant of a catastrophe initiated at a single moment in time.  The simulations of what happened are astonishing enough:

But somehow, to see the remains of animals that were directly killed by the collision, who were there when it happened, gives it an immediacy that is stunning.

So this is cool enough, right?  But what makes it even more personal for me is that one of the researchers who has worked the Hell Creek fossil bed, and was a co-author of the paper...

... is Loren Gurche, who is a former student of mine.

I distinctly remember Loren's contributions to my AP Biology class -- whenever the topic was prehistory, I always deferred to his greater knowledge.  Even then, when he was in 11th grade, he clearly knew way more paleontology than I did, or probably, than I ever would.  The presence of a true expert enriched both my experience and the other students', and it's thrilling to see that he is making significant contributions in a field about which he is so deeply passionate.

So the whole thing is doubly cool for me to read about.  I'm looking forward to more discoveries by Loren and the team he's working with, although it must be said it'll be hard to top this one.  This snapshot of one of the worst disasters ever to strike the Earth is the find of a lifetime.