The dangers of pseudoarchaeology

One of my ongoing peeves is that so many people put more faith in popular media claims than in what the scientists themselves are saying.

This can take many forms.  We have the straw-man approach, usually done with some agenda in mind, where someone will completely mischaracterize the science in order to convince people of a particular claim, and for some reason said people never think to find out what the scientists actually have to say on the matter.  (One example that especially sets my teeth on edge is the young-Earth creationists who say that the Big Bang model means "nothing exploded and created everything" and forthwith dismiss it as nonsense.)

An even more common form this takes is the current passion many people have for shows like Monster Quest and Ancient Aliens and Ghost Hunters, which aim to convince viewers that there is strong evidence for claims when there is actually little or none at all.  This kind of thing is remarkably hard to fight; when you have a charismatic figure who is trying to convince you that the Norse gods were actually superpowerful extraterrestrial visitors, and supporting that claim with evidence that is cherry-picked at best and entirely fabricated at worst, non-scientists can be suckered remarkably easily.

But "hard to fight" doesn't mean "give up," at least to archaeologist David Anderson of Radford University (Virginia).  Because he has absolutely had it with goofy claims that misrepresent the actual evidence, and is publicly calling out the people who do it.

Anderson's quest started in February, when a claim was made on The Joe Rogan Experience that a famous piece of Mayan art, from the sarcophagus of Mayan King K’inich Janaab’ Pakal, who died in 683 C.E., showed him ascending into the skies in a spaceship: 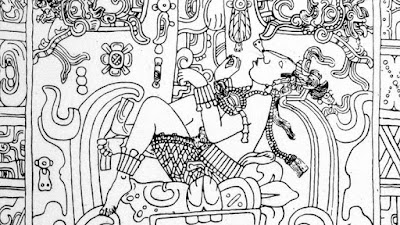 It's one of the favorite pieces of evidence from the "Ancient Aliens" crowd.  But the problem is, it's wrong -- not only from the standpoint that there almost certainly were no "Ancient Aliens."  They evidently never bothered to ask an actual expert in Mayan archaeology, because that's not even what the art is trying to depict. Anderson was infuriated enough that he responded to Rogan in a tweet: "Dear @joerogan… [the piece of Mayan art you mentioned] depicts [Pakal] falling into the underworld at the moment of his death."  The "rocket" beneath the king's body, Anderson explains, is a depiction of the underworld, and the rest of the "spaceship" is a "world tree" -- a common image in Mayan art, not to mention art from other cultures.

Rogan, to his credit, thanked Anderson for the correction, but some of his fans weren't so thrilled, and railed against Anderson as being a "mainstream archaeologist" (because that's bad, apparently) who was actively trying to suppress the truth about ancient aliens for some reason.  Anderson, for his part, is adamant that archaeologists and other scientists need to be better at calling out pseudoscience and the people who are promoting it.  He cites a study done at Chapman University (California) showing that 57% of Americans polled in 2018 believe in Atlantis (up from 40% in 2016) and 41% believe that aliens visited the Earth in antiquity and made contact with early human civilizations (up from 27%).

Anderson says, and I agree, that this is a serious problem, not only because of how high the raw numbers are, but because of the trend.  I know it's not really a scientist's job to make sure the public understands his/her research, but given the amount of bullshit out there (not to mention the general anti-science bent of the current administration), it's increasingly important.

You may wonder why I'm so passionate about this, and be thinking, "Okay, I see the problem with people doubting climate science, but what's the harm of people believing in ancient aliens?  It's harmless."  Which is true, up to a point.  But the problem is, once you've decided that evidence -- and the amount and quality thereof -- is no longer the sine qua non for support of a claim, you've gone onto some seriously thin ice.  Taking a leap into pseudoscience in one realm makes it all that much easier to jump into other unsupported craziness.  Consider, for example, the study that came out of the University of Queensland that found a strong correlation between being an anti-vaxxer and accepting conspiracy theories such as the ones surrounding the JFK assassination.

So learning some science and critical thinking are insulation against being suckered by counterfactual nonsense of all kinds.  Which is why yes, I do care that people are making false claims about a piece of Mayan artwork... and so should you.