The library of possibilities

In the brilliant Doctor Who episode "Turn Left," the Doctor's companion Donna Noble finds out that a single decision she made on a single day -- whether to turn right or left at an intersection -- creates two possible futures, one of them absolutely horrific. 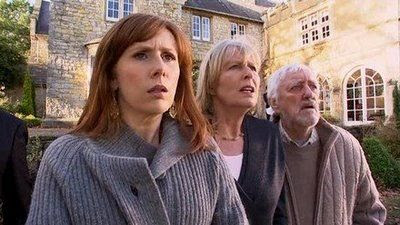 It's a common trope in science fiction (although in my opinion, it's seldom been done as well, nor as poignantly, as in "Turn Left"), to look at how our futures could have been significantly different than they are.  I even riffed on this in one of my own novels -- Lock & Key -- in which there are not only multiple possible outcomes for each decision, there's a library (and a remarkably grumpy Head Librarian) that keeps track of not only what has happened, but what could have happened.  For every human being who ever existed, or who ever might have existed.

If you want to know how I handled the idea, you'll just have to read the book.

In reality, of course, the number of possible outcomes for even a simple series of choices increases exponentially with each successive decision, so in any realistic situation the possibilities are about as close to infinite as you can get.  Which makes a paper that came out in Nature last week even more extraordinary.

In order to see how amazing it is, a brief lesson in quantum mechanics for the non-physics-types in the studio audience.

One of the basic concepts in quantum physics is superposition: any measurable property of a wave (or subatomic particle) exists in multiple states at the same time.  The distribution of these states -- more specifically, the probability that the particle is in a specific state -- can be described by its wave function.  And the completely counterintuitive outcome of this model is that prior to observation, the particle is in all possible states at once, and only drops into a particular one (in a process called "collapsing the wave function") when it's observed.  (Regular readers of Skeptophilia may recall that I did a post on a particular part of this theory, Wigner's paradox, a few weeks ago.)

So that's amazing enough.  Particles and waves exist as a multitude of present possibilities, all at the same time.  But now, a collaboration between physicists at Griffith University (Queensland, Australia) and Nanyang Technological University (Singapore) have gone a step further:

They have developed a prototype device that generates a quantum state embodying all of the particle's future states simultaneously.

My first thought was, "That can't possibly mean what it sounds like."  But yes, that turns out to be exactly what it means.  "When we think about the future, we are confronted by a vast array of possibilities," said Mile Gu of Nanyang Technological University, who led the study.  "These possibilities grow exponentially as we go deeper into the future. For instance, even if we have only two possibilities to choose from each minute, in less than half an hour there are 14 million possible futures.  In less than a day, the number exceeds the number of atoms in the universe."

So having even a simple system that generates all possible futures at the same time is somewhere beyond amazing, and into the realm of the nearly incomprehensible.

"Our approach is to synthesize a quantum superposition of all possible futures for each bias," said Farzad Ghafari, of Griffith University.  "By interfering these superpositions with each other, we can completely avoid looking at each possible future individually.  In fact, many current artificial intelligence (AI) algorithms learn by seeing how small changes in their behavior can lead to different future outcomes, so our techniques may enable quantum enhanced AIs to learn the effect of their actions much more efficiently."

"The functioning of this device is inspired by the Nobel Laureate Richard Feynman," added Dr Jayne Thompson, a member of the Singapore team.  "When Feynman started studying quantum physics, he realized that when a particle travels from point A to point B, it does not necessarily follow a single path.  Instead, it simultaneously transverses all possible paths connecting the points.  Our work extends this phenomenon and harnesses it for modeling statistical futures."

So I'm sitting here, trying to wrap my brain around the implication of this research.  Quantum indeterminacy indicates that we don't live in a completely deterministic universe; there's always some uncertainty, built into the actual fabric of the universe.  But the idea that we could, even in principle, create a system from which we could analyze all of the possible futures is stunning.

As Maggie Carmichael, the Assistant Librarian in Lock & Key, puts it:


All of our actions, even the smallest ones, make a difference.  Most of us never find out what that difference is.  All choices have consequences, however insignificant they seem at the time.  However, the truth of that statement is only evident here in the Library, where we can see what would have happened if we had acted otherwise.  Without that information, what happens simply… happens.