The terrible cost of inaction

I try not to be a one-issue voter, but it would be very hard for me to support a candidate for state or federal office who is not explicitly in favor of addressing the causes of anthropogenic climate change.

The jury is still out, of course, as to whether we might already be too late to avoid some of the worst repercussions.  The temperature is climbing at a rate not seen since the globally-catastrophic Paleocene-Eocene Thermal Maximum 55-some-odd million years ago, and it's possible that the rate of the increase we're seeing now is actually higher.

And yet our politicians sit on their hands.  "The scientists are still uncertain" -- despite the fact that the ones harping on all the doubt are the mouthpieces of the fossil fuel industry, who are scared stiff that there'll be an administration that actually takes climate change seriously.  "It's a natural warm-up" -- despite mountains of evidence that this alteration in the climate is caused by man-made greenhouse gases like carbon and methane.  "It'd cost too much to fix" -- despite the fact that the cost of not doing anything is projected to run into the trillions of dollars.  (More on that in a moment.)  And -- most maddening of all -- "it was cold in January so the world isn't warming" -- which you hear from politicians who evidently failed ninth-grade earth science and never figured out the difference between "weather" and "climate."

We had two more pieces of research recently published that highlight how dire the situation has become.  In the first, a team led by Eric Rignot of the University of California - Irvine showed that the rate of ice loss from Greenland -- which has the world's second-largest on-land ice sheet -- has increased sixfold in the last fifty years.  Between 1980 and 1990, an estimated 51 billion tons of ice melted from the Greenland Ice Sheet; between 2010 and 2018 -- a two-year shorter time span -- 286 billion tons melted.  Of the rise in sea level attributable to Greenland ice melt, over half of it has occurred in the last eight years. 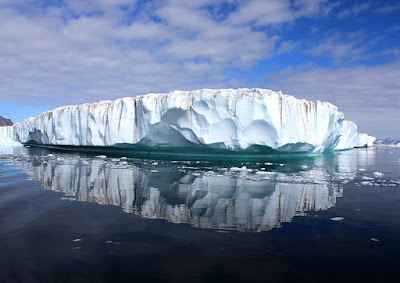 [Image licensed under the Creative Commons Christine Zenino from Chicago, US, Greenland Ice Sheet, CC BY 2.0]

In an interview in the Washington Post, Rignot was unequivocal:


The 1980s marked the transition time when the Earth’s climate started to drift significantly from its natural variability as a result of man-made emissions of greenhouse gases...  The entire periphery of Greenland is affected.  I am particularly concerned about the northern regions, which host the largest amount of potential sea-level rise and are already changing fast.

In Antarctica, some big sleeping giants in East Antarctica are waking up, in addition to a large part of West Antarctica being significantly affected. None of this is good news.  We ought to prepare ourselves for what is coming up and take action as soon as possible to avoid the most drastic scenarios.

The second study, led by climatologist Dmitry Yumashev of Lancaster University, looked at it from the perspective of the only thing that seems to motivate most politicians -- money.  The authors write:


Arctic feedbacks accelerate climate change through carbon releases from thawing permafrost and higher solar absorption from reductions in the surface albedo, following loss of sea ice and land snow.  Here, we include dynamic emulators of complex physical models in the integrated assessment model PAGE-ICE to explore nonlinear transitions in the Arctic feedbacks and their subsequent impacts on the global climate and economy under the Paris Agreement scenarios.  The permafrost feedback is increasingly positive in warmer climates, while the albedo feedback weakens as the ice and snow melt.  Combined, these two factors lead to significant increases in the mean discounted economic effect of climate change: +4.0% ($24.8 trillion) under the 1.5 °C scenario, +5.5% ($33.8 trillion) under the 2 °C scenario, and +4.8% ($66.9 trillion) under mitigation levels consistent with the current national pledges.

Catch that?  Under the best case scenario, the economic cost by 2100 is projected at almost twenty-five trillion dollars.  That's "trillion," with a "t."  And the current Paris Agreement pledges don't even meet that.  If all the signatories meet their pledged targets for carbon emission, the cost is projected to be well over twice that.

Oh, and the United States, one of the top carbon emitters in the world, withdrew from the Paris Agreement in June of 2017 under an explicit directive from Donald Trump, using the excuse that the mandated targets would be "too expensive" and "economically disastrous for the United States."

You want to see economic disaster, Mr. Trump?  You ain't seen nothing yet.  Wait till rising sea levels start inundating coastal cities, requiring massive relocation.  And from the Rignot et al. study referenced above, the wait may not even be that long.

"It’s disheartening that we have this in front of us," Yumashev said in an interview with The Guardian.  "We have the technology and policy instruments to limit the warming but we are not moving fast enough."

Disheartening?  I'd call it "alarming," myself.

I know I've rung the changes on this topic many times, but I feel duty-bound to keep bringing it up because our leaders are still not doing anything.  There's been some lip-service to addressing climate change, but the propaganda machine that is bound and determined to label any recommendations for mitigation as left-wing ultra-green economically unfeasible claptrap has worked all too well.  So don't expect this to be the last time you hear about it here -- and, hopefully, elsewhere.  We'll keep yelling until the politicians wake up or get voted out of office.

It's too important an issue to do otherwise.