New from the "Well, At Least They're Going About It The Right Way" department, we have: the US Navy's new guidelines for reporting UFOs.

Apparently, this rewrite was spurred by an uptick in reports of strange sightings, although the powers-that-be state in no uncertain terms that they're not saying any of these are alien spacecraft.   "There have been a number of reports of unauthorized and/or unidentified aircraft entering various military-controlled ranges and designated air space in recent years," the Navy said in a statement in response to questions from POLITICO.  "For safety and security concerns, the Navy and the [U.S. Air Force] takes these reports very seriously and investigates each and every report.  As part of this effort, the Navy is updating and formalizing the process by which reports of any such suspected incursions can be made to the cognizant authorities.  A new message to the fleet that will detail the steps for reporting is in draft."

While I do tend to agree with Neil DeGrasse Tyson's view that the eyewitness testimony of pilots, policemen, ships' captains, and other people wearing uniforms isn't inherently better than that of the rest of us -- "it's all bad," he says -- I do have some niggling doubts about including pilots on that list.  After all, Tyson goes on to say that the frequency of reports of UFOs from astronomers is lower than that of the rest of the population because -- another direct quote -- "We know what the hell we're looking at!", ignoring the fact that pilots spend a lot of time looking up, too.  My guess is that a seasoned pilot wouldn't be taken in by such uncommon but perfectly natural phenomena as noctilucent clouds, lenticular clouds, sun dogs, sprites, STEVE (strong thermal emission velocity enhancement), and fallstreak holes.

And honestly, much of what pilots have reported don't admit of easy explanation.  According to Chris Mellon, former Assistant Secretary of Defense for Intelligence, a large percentage of the sightings were of objects "flying in formation" and "exceeding the speed of the airplane."

I'm in agreement that those sightings deserve investigation, and there needs to be a lessening of the stigma of even making the report.  Mellon says that a lot of pilots who've seen UFOs have chosen not to report them because of fear of ridicule or of actually hurting their careers.

So far, so good.  But then Luis Elizondo, who runs the Advanced Aerospace Threat Identification Program, got involved, and took the new recommendations and leapt right into hyperspace.  "If I came to you and said, ‘There are these things that can fly over our country with impunity, defying the laws of physics, and within moments could deploy a nuclear device at will,’ that would be a matter of national security," Elizondo said.  "This type of activity is very alarming, and people are recognizing there are things in our aerospace that lie beyond our understanding."

Now just hang on a moment.

There's about a light year's distance between "I saw an unexplained light in the sky" and "this is a spacecraft that defies the laws of physics and is just waiting to deploy a nuclear device against us."  I mean, on the one hand, I think what Elizondo is saying is that by the time an alien spaceship did deploy a nuclear weapon, it'd be too late to do anything about it, which is true as far as it goes; but don't you think the first step would be to establish that what people have seen are alien spaceships before we go into collective freak-out mode? 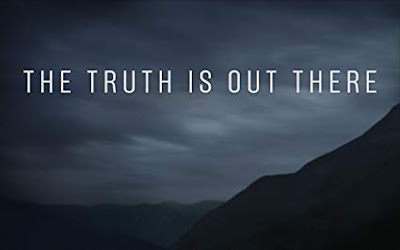 And I am absolutely sick unto death of people claiming that these alleged aliens can "defy the laws of physics" and "are beyond our understanding."  Maybe I'm being a little cocky and defensive, here, but the laws of physics are pretty damn well established, and I'd be willing to bet cold hard cash that if there are aliens out there, they obey the same laws of physics we do.  I'd also be willing to wager that even if there is some hitherto-unknown bit of physics that is allowing the aliens to do their aerial gymnastics, it's not "beyond our understanding."  Physicists are by and large pretty smart women and men, and my guess is they would be perfectly capable of understanding it, if the aliens would just land their spaceships and sit down and discuss it with them.

So simultaneously mythologizing and catastrophizing these sightings isn't very productive, or even very realistic.  Yes, they should be investigated.  I'm also with Michio Kaku that if even one in a hundred credible UFO sightings are unexplainable as natural terrestrial phenomena, that 1% is worth looking into.  But we need to keep our heads on our shoulders and not assume that everything we haven't explained will turn out to be something we can't explain.

I think the US Navy has the right idea, though, in making it part of their policy to take UFO sightings by pilots seriously.  And hell, maybe one of the reports will turn out to be evidence of extraterrestrial intelligence.  Believe me, no one would be more thrilled than I am if this turned out to be the case.  But it's important to keep looking at these things skeptically, always questioning and looking for alternate (natural) explanations, especially if the more out-there explanation is something we'd very much like to be true.

Because everyone -- even pilots, astronomers, and people in the Advanced Aerospace Threat Identification Program -- are subject to confirmation bias.

Posted by Gordon Bonnet at 1:44 AM