That loony people have loony ideas is kind of a tautology.  But what amazes me is when other people listen, and continue listening, once the person has established himself as a raving wackmobile.

Today we're referring to Mark Taylor, the self-styled "firefighter prophet," who has already appeared twice here at Skeptophilia.  The first time was back in 2017, when Taylor appeared on the radio program Pass the Salt, and gave us a terrifying warning that the Freemasons and Illuminati are controlling our DNA by making orchestras tune to A = 440 hertz, with the result that we get sick and dislike Donald Trump.  Then last year, he announced that Hurricane Michael was sent to Florida by the Democrats because they were angry over the fact that Brett Kavanaugh was confirmed as a Supreme Court Justice, despite the fact that Kavanaugh wasn't anywhere near Florida at the time.

So there's no reason we'd expect that anything Taylor is saying would be correct, or even make sense.  Despite that, he's still a frequent flier on programs geared to right-wing conspiracy nuts and evangelical Christians, who seem to eat this stuff up.  In fact, last year some people at Liberty University made a movie about Taylor called The Trump Prophecy wherein we find out that Taylor struggled with persistent nightmares caused by the fact that one of his ancestors had been a Freemason, so he had to "rid himself of the generational curse" before he could throw himself into helping to fulfill God's will that Donald Trump had to win the election.

Oh, and the border with Mexico is the site of a "demonic gate" that will only be sealed if Trump builds his border wall.

So a pinnacle of reason and logic this guy isn't.  But this time, he's outdone himself.

Because he appeared last weekend on the evangelical radio program Blessed to Teach with his latest warning, which goes something like the following:

Everything gives off frequencies.  So does God.  When you pray, you're tuning into God's frequency.  But now Satan is using chemtrails to "block God's frequency" so that humans turn into "giant antennas" tuned in to Satan's frequency instead.

How does he know this?  Because, he said, he was researching chemtrails, and he found that they are primarily composed of barium and aluminum.

"The chemtrails, all the spraying is to detract us from hearing God’s frequency," Taylor says.  "They are spraying aluminum and barium in the chemtrails and if you look on the periodic table—barium is BA, aluminum is AL; it spells BAAL.  That’s deep.  That’s no coincidence."

He's right that it's no coincidence.  The symbols for barium and aluminum are "Ba" and "Al" because that's the first two letters of each of their names. 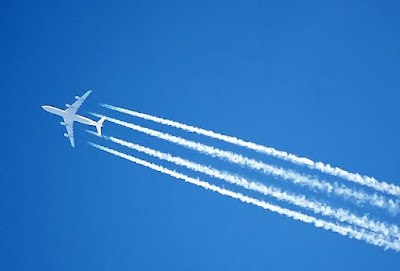 But Taylor never lets anything like logic get in his way.  "We are literally walking antennas because we’ve been breathing the aluminum, we’ve been breathing the barium," he says.  "We are literally giant antennas, which was intended.  If you want to get really deep on this, these entities that the devil has put down here that these satanist worship or tap into for this knowledge, if you will, they have told them how to do this stuff.  They’ve showed them how to do this stuff for decades, for thousands of years, but they’ve tapped into this stuff about how to clog up man’s ears and eyes to be able to sense and feel God every time you’re walking around."

I hesitate even to lend him any credence by refuting his claim, but the origin of the whole chemtrails idiocy was a guy in Louisiana who collected some dew in a bowl, claimed it was from a jet contrail, and had it tested.  Then he notified a television station, and the reporter mistakenly stated that the amount of barium contained in the water was being measured in parts per million of barium instead of parts per billion, with the result that it appeared the water had a thousand times the amount of barium it actually did.  (The minuscule amount of barium it did contain almost certainly came from airborne dust.)

And that's how chemtrails started, which continueth lo unto this very day.

But the good news is you don't have to worry about "literally turning into a giant antenna."

Anyhow, that's the latest, but almost certainly not the last, from the "firefighter prophet."  Even writing about this is making me wonder if the contrails over my house might be contaminated with beryllium and erbium, because it leaves me feeling like I need a beer.

And that's no coincidence.