Two years ago I wrote about a project called Breakthrough Starshot, which proposed sending small remote-controlled cameras to nearby star systems, powered by lasers that could propel them up to twenty percent of the speed of light.

Which means we could be getting photographs back from Proxima Centauri in twenty years. 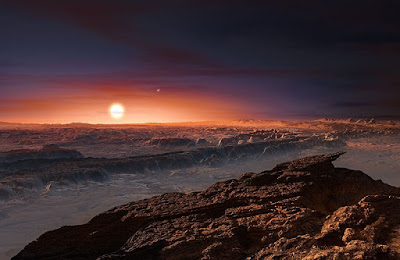 It's an ambitious project, and faces significant hurdles.  Even if propelled by lasers -- which, being light, travel at the speed thereof -- navigation becomes increasingly difficult the farther away it gets.  Even at the distance of Pluto, our intrepid little spacecraft would be 4.5 light-hours from Earth, meaning if we tried to beam it instructions to dodge around an incoming meteor, it would be 4.5 hours until the command arrived, at which point all that would be left is intrepid scrap metal.  And Proxima Centauri is 4.3 light years away.

You see the problem.  The Starshot spacecraft would have to be able, on some level, to think for itself, because there simply wouldn't be time for Mission Control to steer it to avoid danger.

There are other obstacles, though.  Besides the obvious difficulties of being in the cold vacuum of interstellar space, contending with cosmic rays and the like, there's the problem engendered by its speed   Assuming the estimate of a maximum velocity of twenty percent of light speed is correct, even tiny particles of dust would be formidable projectiles, so Starshot is going to require some heavy-duty shielding, increasing its mass (and thus the amount of energy needed to make it go).

But last month we got an encouraging proof of concept, when the group working on the mission -- Russian entrepreneur Yuri Milner's Breakthrough Foundation -- launched a test of the Starshot craft.  It was a tiny little thing, small enough to fit in your hand and weighing about the same as a stick of gum, designed and built by engineers at the University of California - Santa Barbara, and in the test flight achieved an altitude of nineteen miles, all the while functioning flawlessly, returning four thousand images of the Earth taken from aloft.

The Breakthrough Foundation is planning a suborbital test next year, and perhaps a full orbit the year after that.  So things are moving along.  But the most significant hurdle is to design the laser system to make Starshot move -- lasers that are so finely collimated that they can still strike a ten-centimeter craft square-on from several light years away.  The engineering director for Breakthrough, Peter Klupar, is designing a 100,000 gigawatt laser -- to be located, he says, in Chile -- that could be the answer.  Of course, such a powerful device is not without its dangers.  Reflected off a mirror in space, Klupar says, such a laser could "ignite an entire city in minutes."

Not that there's a mirror out there.  So you shouldn't worry at all about that.

"You would think that this is all impossible, but we have folks at Caltech and the University of Southampton and Exeter University working on about 50 contracts on making all [of] this happen," Klupar said.  "No one has come up with a deal-breaker that we can find yet. It all seems real."

One possible way to increase the thrust generated by the laser is to increase the surface area that the beam strikes, and Klupar thinks he knows how to do that -- using a "light sail."  He's already built a prototype.  "The sail is very thin. It's about 400 atoms thick, it weighs about a half a gram, and it's four meters in diameter," he said.  "I think of it as 'reflective smoke.'"

All of which may seem like science fiction, but it's phenomenal how fast things go from the realm of Star Trek to reality.  Klupar compares his light sails to CubeSats, tiny (ten by ten centimeters, weighing a little over a kilogram) orbiting telemetry devices that are now common.  "It feels a lot like the way CubeSats felt twenty years ago," he said.  "People were saying, 'Those are toys, they're never going to develop into anything, there's no way I can see that ever working.'  And today and look them: Hundreds of millions of dollars is being spent on them."

So keep your eye on this project.  If there's a chance at a remote visit to another star system, I think this is our best bet.  The Breakthrough Foundation estimates an actual, honest-to-goodness launch toward a nearby star as early as 2030.  Meaning perhaps we could get our first photographs of planets around another star by 2050.

I'll be ninety years old at that point, but if that's what I'm waiting for, I can make it till then.