I get really fed up with people's gullibility sometimes.

I mean, I get it.  No one's an expert at everything, there are gaps in our knowledge, so when we hear a claim about something with which we are less-than-well-informed, we might shrug and go, "Okay, that might be true."

But the thing is, we shouldn't stop there.

So you don't just shrug, say, "That makes sense, I suppose," and forthwith stop thinking.  You do a little research -- in these days of the internet, it's hardly time consuming to do so.  You learn something to fill in the gap in your understanding.  You consider the reliability of the source -- either the person you heard it from, or the original source material.

Or all of the above.

It may seem like a lot of work, but it will result in your not being suckered by the latest bizarre claim, fad, or challenge floating around cyberspace.  And there have been some doozies.  Here's a sampler:
I'd like to say that things like the aforementioned have cured people of believing idiotic claims out of hand, but that optimistic idea got squelched yesterday when I read that -- and I must state up front, I am not making this up -- guys are dipping their genitals in soy sauce because "studies show" that men have taste receptors in their testicles.

The whole thing started with the only source I know of that is less reliable than Fox News, which is The Daily Mail Fail.  Apparently back in 2017 some researchers found that there are nerve endings in the testicles of mice, of unknown function, that are similar to the bitter chemoreceptors of the tongue.  This was reported by The Daily Mail that mice taste with their balls.  And that prompted bunches of guys to dip their junk in soy sauce to see if they could confirm those results.

(I wondered immediately, why soy sauce in particular?  Why not some other condiment?  But then I realized that there are many worse choices, such as habañero pepper sauce, the thought of which is going to have me in a protective crouch for the rest of the day.) 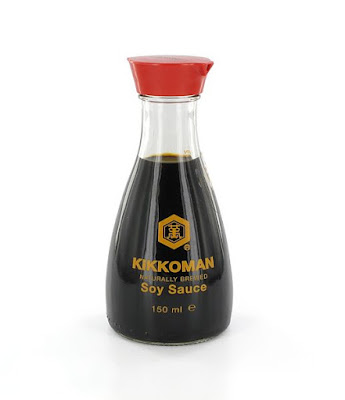 Despite dozens of videos making their way around the internet with guys trying the new Testicle Teriyaki recipe and then shouting, "I can taste the soy sauce!", the whole thing is idiotic.  I mean, it pains me even to have to say that in so many words.  Even if the chemoreceptors in the testicles of humans are the same as those of mice, and they could somehow be activated by something in soy sauce, there's a fundamental problem -- stay with me here -- in that guys' balls are inside our scrotums.  So this would only have a prayer of a chance of working if we absorbed chemicals through our scrotums.  The fact that we don't should be obvious to any guy who has washed his junk with soap and water while taking a shower, and -- surprise! -- doesn't end up tasting soap.

So if any guys reading this are tempted to dip their balls in soy sauce, just... don't.  Stop, think, research, consider the source.  And please, don't listen to The Daily Mail.  Like, on anything.  Especially if they're saying you should drop your pants and pour condiments on your naughty bits.