Trapped in the ice

Today in the "I've Seen This Movie, And It Didn't End Well" department, we have: scientists digging into glacial ice and finding heretofore-undiscovered species of viruses and bacteria.

Just this week, a paper called "Glacier Ice Archives Fifteen-Thousand-Year-Old Viruses" was released as a preprint on bioRxiv, detailing work by a team led by Zhi-Ping Zhong of Ohio State University.  Here's what the scientists themselves write about the research:


While glacier ice cores provide climate information over tens to hundreds of thousands of years, study of microbes is challenged by ultra-low-biomass conditions, and virtually nothing is known about co-occurring viruses.  Here we establish ultra-clean microbial and viral sampling procedures and apply them to two ice cores from the Guliya ice cap (northwestern Tibetan Plateau, China) to study these archived communities...  The microbes differed significantly across the two ice cores, presumably representing the very different climate conditions at the time of deposition that is similar to findings in other cores.  Separately, viral particle enrichment and ultra-low-input quantitative viral metagenomic sequencing from ∼520 and ∼15,000 years old ice revealed 33 viral populations (i.e., species-level designations) that represented four known genera and likely 28 novel viral genera (assessed by gene-sharing networks).  In silico host predictions linked 18 of the 33 viral populations to co-occurring abundant bacteria, including Methylobacterium, Sphingomonas, and Janthinobacterium, indicating that viruses infected several abundant microbial groups.  Depth-specific viral communities were observed, presumably reflecting differences in the environmental conditions among the ice samples at the time of deposition.

On the face of it, it's unsurprising they're finding new viruses, because we find new viruses wherever we look in modern ecosystems.  Viruses are so small that unless you're specifically looking for them, you don't see them.

But four new genera of viruses is a little eyebrow-raising, because that means we're talking about viruses that aren't closely related to anything we've ever seen before.

This, of course, brings up the inevitable question, which was the first thing I thought of; what if one of these new viruses turns out to be pathogenic to humans?  The majority of viruses don't cause disease in humans, but it only takes one.  Science fiction is rife with people messing around with melting ice and releasing horrors -- this was the basic idea of The Thing, not to mention The X Files episode "Ice" and best of all (in my opinion) the horrifying, thrilling, and heartbreaking Doctor Who episode "The Waters of Mars," which is in my top five favorites in the entire history of the series. 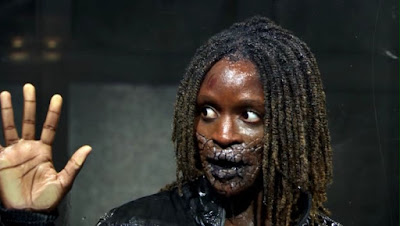 So I'm hoping like hell the research team is being cautious.  Not that it ever made any difference in science fiction.  Somebody always fucks up, and large amounts of people end up getting sick, eaten, or converted to some horrifying new form that goes around killing everyone.

Lest you think I'm just being an alarmist because I've watched too many horror movies, allow me to point out that this sort of thing has already happened.  In 2016, permafrost melt in Siberia released frozen anthrax spores that sickened almost a hundred people, one fatally, and killed over two thousand reindeer -- after that region not seeing a single case of anthrax for at least seventy years.

On the other hand, it's understandable that the scientists are acting quickly, because the way things are going in the climate, glaciers will be a thing of the past in fairly short order.  Glaciers and polar ice sheets are time capsules, layer by layer preserving information about the climatic conditions when the ice was deposited, even trapping air bubbles that act as proxy records giving us information about the atmospheric composition at the time.  (This is one of the ways we've obtained carbon dioxide concentrations going back tens of thousands of years.)

However, it also preserves living things, including some that seem to retain their ability to be resuscitated nearly indefinitely.  I try not to panic over every little risk, but I have to admit this one has me spooked.  We don't have a stellar track record for caution, but our track record for saying, "Oh, yeah, this'll work!" and then unleashing a catastrophe is a good bit more consistent.

So let's be careful, okay, scientists?  I'm all for learning whatever we can learn, but I'd rather not be turned into a creepy evil being with a scaly face dripping toxic contagious water all over the place.  Call me picky, but there it is.