A pandemic of conspiracies

I have to admit that COVID-19 has me a little skittish.

I know all the reassuring bits -- that most people who contract it have few or no symptoms, that the mortality rate is only 2% (contrast that with 70% mortality rate for a monster like Ebola-Zaire), that the flu is worse and we don't panic about that every year.

But.  I've read The Stand and watched Outbreak, and the similarities are alarming, not in the symptoms or severity, but in how the government is handling it.  Outright incompetence, coupled with attempts to muzzle the news media, along with reassurances that are almost certainly false ("a vaccine will be widely available soon").  There was a cluster of cases in Kirkland, Washington -- where I lived for ten years -- and just this morning there was the confirmation of a case...

So at the moment I'm oscillating between "guarded" and "freaking right the fuck out."

At least I keep telling myself to go back to the facts -- what the CDC has discovered about the virus, recommendations for avoiding getting sick, maps of actual cases.  Which is more than I can say for a few other people.

Situations like this always seem to be prime breeding ground for conspiracy theories.  My explanation for this is that people are happier believing that there's a cause for Bad Stuff Happening even if the cause itself is kind of horrifying than they are believing that bad things just happen because they happen.  Global evil is, for some reason, more comforting than simple chaos.

But still.  There are some people who should, in Will Rogers's words, never miss a good opportunity to shut up.

Top of that list is New Zealand-based evangelical Christian preacher Brian Tamaki, of the Destiny Church of Auckland, who said this weekend that COVID-19 wasn't actually a virus, it was an airborne demon, and that therefore True Believers were immune.

"Satan has control of atmospheres unless you're a born-again, Jesus-loving, Bible-believing, Holy Ghost-filled, tithe-paying believer," Tamaki said, with special emphasis on the "tithe-paying" part.

"You're the only one that can walk through atmospheres and have literally a protection, the PS-91 protection policy."  PS-91, by the way, isn't a medication.  It's code for Psalm 91, wherein we read, "Surely he will save you from the fowler's snare or the deadly pestilence."

Because that worked out so well for people during the Black Death.

Tamaki, though, was hardly the only one who's been saying that coronavirus wasn't an ordinary epidemic.  The announcement by the World Health Organization that COVID-19 is now officially a pandemic was followed nearly immediately by Donald Trump announcing at a rally that the outbreak is a "hoax" by the Democrats to discredit him.  How the Democrats created a virus in China and then spread it all over the world is a matter of conjecture, but the MAGA-crowd isn't exactly known for their critical thinking skills, so there was an immediate outcry against those evil Democrats trying to damage Dear Leader.  Then when someone pointed out that it was odd, if the epidemic was caused by the Democrats trying to gain political advantage, the first states to have confirmed cases were strongly liberal-leaning -- California, Oregon, Washington, and New York.

"No," the MAGAs responded.  "The Democrats did that on purpose!  They're making themselves sick so they can blame it on Donald Trump!"

But no one has a better conspiracy theory (and by "better" I mean "completely batshit insane") than the one my wife found a couple of days ago.  Because a summary wouldn't nearly do it justice, here it is in all its glory: 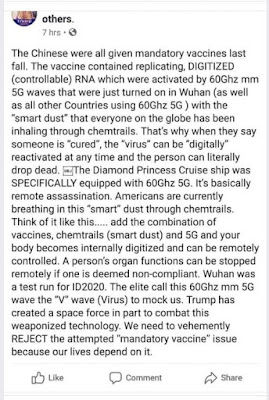 And, of course, rejecting vaccines. 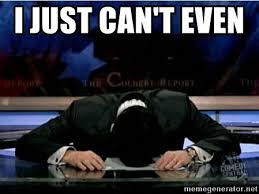 Look, I know it's scary.  I know it's natural to try to find reasons for things, because once you see the reasons, you can control the fear.

But that is no excuse for making shit up.

Let's all just calm down, take as many precautions as we can (including, most importantly, wash your damn hands).  Panicking and inventing crazy fairy tales and conspiracy theories doesn't solve anything or help anyone.  There's no reason to overreact.

Now, y'all'll have to excuse me, because I'm off to put on my hazmat suit and enter my underground bunker for the next three months.