Let me be up front that I'm fully in favor of freedom of speech and freedom of the press.

That said, I have to ask: what the fuck are the people who run Fox News thinking?

They've been irresponsible before.  Hell, they've lied outright before.  (Yes, yes, I know other media are guilty of the same thing.  If your only defense of your behavior is "He does it, too!", you might want to consider whether you have a defensible point in the first place.)  But yesterday morning, I saw a clip from Fox Business that aired Monday night and takes irresponsibility and dishonesty to new and unscaled heights.

Those of you keep your eyes on the news no doubt already know that I'm talking about Trish Regan's rant about how the COVID-19 pandemic is being deliberately used by Democrats to take down Donald Trump.  (If you doubt that's the message, consider that the banner next to her during the entire segment said, "Coronavirus Impeachment Scam.")  Here's the bit that stood out:


The chorus of hate being leveled at the President is nearing a crescendo as Democrats blame him -- and only him -- for a virus that originated halfway around the world.  This is yet another attempt to impeach the President.  And sadly it seems they care very little for any of the destruction they are leaving in their wakes.  Losses in the stock market, all this unfortunately just part of the political casualties for them...  The hate is boiling over.  Many in the liberal media are using -- and mean using -- coronavirus in an attempt to demonize and destroy the President.

First, to correct a few of the most egregious lies.

No one blames Trump for the virus.  The virus is a naturally-occurring pathogen that does what it does irrespective of your nationality or political leanings.  What a lot of people are blaming him for is his bungled handling of the pandemic response, starting with the fact of his calling it a "hoax" at one of his rallies.  Yeah, okay, he amended it later, saying he only meant that the Democrats' response to it had been a hoax, but look, I watched the video clip.  The exact quote was, "Now the Democrats are politicizing the coronavirus.  They have no clue, they can't even count their votes in Iowa.  This is their new hoax."

If you don't come away from listening to that with the message, "The coronavirus pandemic is a hoax," you're much better at reading between the lines than I am.

All along, Trump's reaction has been to downplay the seriousness of the situation.  After a visit to the CDC, he did a press conference in which he said -- again, this is verbatim: "As of the time I left the plane with you, we had 240 cases.  That's at least what was on a very fine network known as Fox News.  And you love it.  But that's what I happened to be watching.  And how was the show last night?  Did it get good ratings, by the way?  I heard it broke all ratings records, but maybe that's wrong.  That's what they told me."

He also said that the number of cases in Italy was decreasing (it wasn't), that anyone in the United States who wanted a COVID-19 test could have one (they can't), and that the pandemic was going to be good for the economy because people wouldn't go overseas to spend their money. 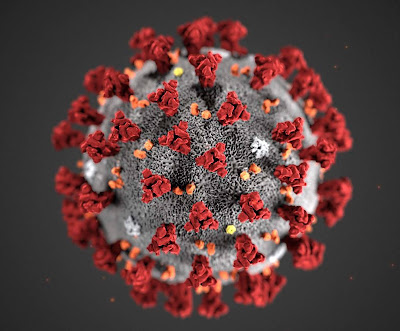 [Image is in the Public Domain, courtesy of the Center for Disease Control]

But this goes beyond an ill-informed, ignorant talking head spewing nonsense.  Because this nonsense is gonna kill people.

Don't believe me?  Already this morning on social media, I've seen the following:
Now let's look at what actual epidemiologists are saying.

The World Health Organization and the CDC are in agreement that realistically, by the time the dust settles between 40% and 70% of the world's population will have been infected.  If the 2% mortality rate figure holds (and taking the mean value of 55% infected), that means 77 million people dead.

Which is twice the total killed by the Spanish flu -- the deadliest pandemic on record.

What Trish Regan did on Fox Business two nights ago puts people's lives in danger by convincing them the risk is minimal.  China got ahead of the epidemic by enacting the largest quarantine in the history of the world.  At the moment, Italy is following suit, and has the entire damn country on lockdown -- no unnecessary travel, stay home except for emergencies.  They're taking this seriously, as well they should.

But with idiots like Trish Regan trying to convince everyone that the whole thing is a plot by the evil Democrats to ruin Donald Trump, how much likelihood is there of that working here -- and even if it were mandated, for people to go along with it?

Look, I'm a biologist.  I know enough about viruses and disease pathology that I don't panic every time the flu goes around in winter.  But this thing is qualitatively different.  This has the potential to kill a huge number of people, especially older people and those with compromised immune systems.

Like I said, I support free speech and freedom of the press.  But this is shouting "fire!" in a crowded theater.  And I hope like hell I'm wrong, but my gut tells me that Trish Regan and Fox News are going to be responsible for a lot of people dying before this is over.