Today we're going to turn our attention once more to the distant past, for three stories about three very strange extinct animals.

The first one springboards off Monday's post, about the spectacular Kem Kem fossil beds in Morocco, that gives us a snapshot of "the most dangerous place in the history of planet Earth," according to Nizar Ibrahim of the University of Detroit, who led the team that investigated the site.

What we already knew was impressive enough, with scads of gigantic predators with Big Nasty Pointy Teeth coming at you from all directions, including overhead.  But a paper this week in Nature added another dimension to one of the Kem Kem species -- Spinosaurus, a thirteen-meter-long, eighteen-ton dinosaur with a giant sail running down its back and a row of evil-looking conical six-centimeter-long teeth.

Thus far, it sounds like another lumbering predator of the kind made famous by Jurassic Park, but now Nizar Ibrahim is lead author on another study, called "Tail-Propelled Aquatic Locomotion in a Theropod Dinosaur," we find out something that makes it even more terrifying:

This thing was aquatic.

So we're talking about a water-dwelling predator that makes great white sharks look like goldfish. 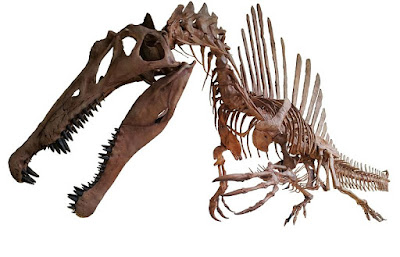 
This dinosaur has a tail with an unexpected and unique shape that consists of extremely tall neural spines and elongate chevrons, which forms a large, flexible fin-like organ capable of extensive lateral excursion.  Using a robotic flapping apparatus to measure undulatory forces in physical models of different tail shapes, we show that the tail shape of Spinosaurus produces greater thrust and efficiency in water than the tail shapes of terrestrial dinosaurs and that these measures of performance are more comparable to those of extant aquatic vertebrates that use vertically expanded tails to generate forward propulsion while swimming.  These results are consistent with the suite of adaptations for an aquatic lifestyle and piscivorous diet that have previously been documented for Spinosaurus.  Although developed to a lesser degree, aquatic adaptations are also found in other members of the spinosaurid clade, which had a near-global distribution and a stratigraphic range of more than 50 million years, pointing to a substantial invasion of aquatic environments by dinosaurs.

So this gives new meaning to the tagline from Jaws, "Don't go into the water."

Then from Madagascar we have a well-preserved fossil from the weird -- and poorly-known -- group called gondwanatheres.  These were mammals, mostly confined to the Southern Hemisphere (unsurprising given the name, if you know your prehistoric geography), and despite a superficial similarity to a capybara, aren't closely related to any current mammalian group. 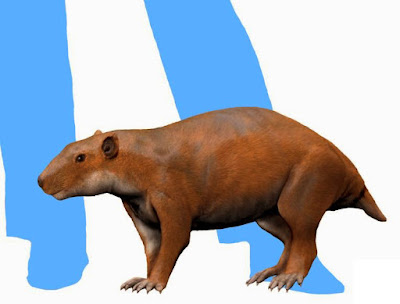 The most recent find is from the species Adalatherium hui, which is a Greek/Malagasy mishmash meaning, basically, "crazy beast."  The species predated the Cretaceous Extinction -- so it coexisted with the last of the non-avian dinosaurs -- and had a number of bizarre features, such as a hole in the top of the snout.  The oddity of its features may have to do with isolation in an island environment, allowing the evolution of the species to run in a different direction from its mainland relatives.  "Island environments promote evolutionary trajectories among mammals and other vertebrates that contrast with those on continents, and which result in demonstrable anatomical, physiological and behavioural differences," write the authors, a team led by David Krause of the Denver Museum of Nature and Science.  "These differences have previously been ascribed to markedly distinct selection regimes that involve factors such as limited resources, reduced interspecific competition and a paucity of predators and parasites."

So here's a reconstruction of Adalatherium.  The badger-like coloration is artistic license, of course, based on the inference from its skeleton that it made its living by digging: 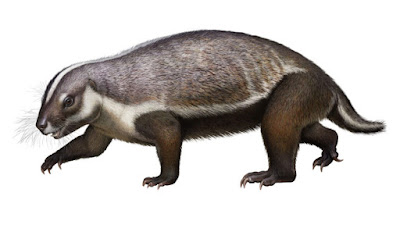 The gondwanatheres seem to be closely related to another weird extinct mammalian group, the multituberculates, about which I wrote a year ago.  Both vanished, for reasons unknown, in the Miocene Epoch, on the order of fifteen million years ago.

The latest piece of research is about the strangest, most alien-looking animal ever, Tullimonstrum (the "Tully Monster," named after Francis Tully, who discovered the first fossils of the species).  If you think I'm being hyperbolic, here's what the Tully Monster looked like: 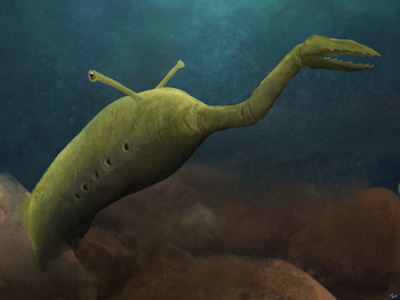 The thing was so peculiar that paleontologists couldn't even decide if it was an invertebrate or a proto-vertebrate; the evidence seemed to favor the latter, and a 2016 study concluded it was an ancestral vertebrate related to lampreys and hagfish based upon its eye structure, fins, and teeth.  But now, new research that included detailed analysis of the eyes using a particle accelerator to determine the elemental makeup of the remnants in the fossil has thrown a wrench into that explanation.  In an article in LiveScience, paleontologist Chris Rogers of the University College-Cork tells us that the ratio of zinc to copper in the animal's eyes is much more like an invertebrate than a vertebrate -- but before we rewrite all the textbooks on Precambrian animals, the distribution of copper wasn't much like an invertebrate, either.  "We... found that Tully's eyes contain different type of copper to that found in vertebrate eyes," Rogers writes.  "But the copper also wasn't identical to that in the invertebrates we studied.  So while our work adds weight to the idea that Tully is not a vertebrate, it doesn't clearly identify it as an invertebrate either."

So we're back to the "what the hell is it?" stage of things.

Anyhow, that's our excursion into the past for today.  As I've pointed out before, the inherently fragmentary nature of the fossil record means that our picture of what life was like back then is going to be incomplete at best.  But slowly, painstakingly, researchers are refining our view of the animal life of eons long gone -- and what they're showing us is strange indeed.