You've probably heard the recent controversy about removing the statues of Confederate officers from prominent positions in the Deep South, with the anti-removal-crowd saying "It's our heritage" and the pro-removal-crowd saying "... but it's celebrating racism."  I don't intend to explore the reasoning behind either position, since I suspect that (1) we all know what our opinions on the issue are, and (2) it's unlikely anything I say would change anyone's mind.  But I do want to offer an alternative, which was (unfortunately) not my idea but the brainstorm of some folks in West Virginia.  They want to replace the statues celebrating the Confederacy with...


To many West Virginians, Mothman carries more significance than any Confederate general.  In fact, the legend originated in the town of Point Pleasant, when locals spotted a “man-sized bird creature” prior to the 1967 Silver Bridge collapse that killed 46 people.  Mothman was blamed and retroactively seen as a bad omen that foreshadowed the disaster.  From there, the story of the Mothman spread across the country and became an urban legend of sorts.

Twitter user Brenna (@HumanBrennapede) has an additional reason for preferring Mothman; unlike most Confederate generals, she says, Mothman has "a six-pack and an objectively good ass."  The statue of the creature in Point Pleasant, West Virginia, illustrates this: 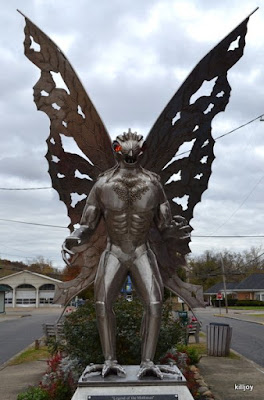 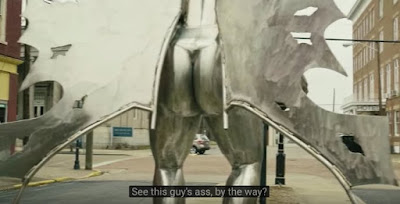 And I have to admit she's right that he has quite a shapely posterior.  It does remind me, however, of my days teaching Ancient Greek to high schoolers.  One of my classes complained to me one day that they were sick of learning phrases of limited modern utility like "O Zeus, accept my sacrifice" and "Prometheus's liver is being devoured by an eagle."

"Well, what do you want to learn how to say?" I asked.

They all laughed, and I added, "I guess if you know how to say, 'you have a nice ass,' you'd better learn how to say 'thank you.'"  So I had them repeat after me, 'sas eukharisto.'"

At this point, the class was in hysterics.  Something seemed off -- it wasn't that funny.  So I turned around...

... and the principal was standing in the doorway.

Fortunately, he has an awesome sense of humor, and joined in the laughter at my obvious discombobulation.  And the students used that as their greeting to each other in the hall for the rest of the school year: "Kalein pygian ekheis."  "Sas eukharisto!"

Never let it be said that I didn't make an impact as a teacher.

Anyhow, I think the Mothman statue idea is brilliant.  It could be applied to lots of other states, too, each of which has its own terrifying and inhuman monster.  Florida could have statues of the Skunk Ape.  Louisiana has the Grunch.  Arkansas has the Boggy Creek Monster.  Kentucky has Mitch McConnell.

You get the idea.

So that would solve the problem of injuring state pride, and focus people's attention away from a bunch of military leaders who (to be brutally frank) lost anyhow.

But I'm not expecting it to catch on.  Inspired ideas usually don't.  Even ones that involve making statues of a creature with "an objectively good ass."