My interest in gargoyles started back in the mid-1970s, when I was a teenager, and my dad and I were watching the 1972 movie of that name.  I was lying on the couch and my dad was in his recliner, and my eyes were fixed on the screen as the main character, the brave and handsome anthropologist Dr. Mercer Boley, hit one of the devilish creatures with his pickup truck while traveling the roads of rural New Mexico at night.

Dr. Boley had been trying to convince his skeptical peers for ages that gargoyles were real, and that the medieval statuary on church roofs had been sculpted from live models.  So when he clobbered one, he figured that was his chance to prove his point.  He loaded up the gargoyle's body in the bed of his truck.

He stopped at a motel for the night, and was worried what someone would think if they walked past his truck and saw a dead gargoyle in the back.  So he did what anyone would do, provided they had the IQ of a peach pit: he carried the gargoyle into his motel room.

Well, if you've ever seen any 1970s horror movies, you know what happened next.  The gargoyle was only stunned, not dead.  The camera angle is looking down the length of Dr. Boley's body, lying in bed under his blanket, and in the deep shadows, a humanoid figure starts to rise up over the foot of the bed...

At that point, my dad, who had a questionable sense of humor but impeccable timing, reached out and grabbed my shoulders and shouted, "THERE'S ONE NOW!"

I'm honestly not sure how Dr. Boley got away, because it took me about ten minutes first to peel myself off the ceiling with a spatula, and then to go look for a change of underwear.  My dad thought all this was drop-dead funny -- which it almost literally was -- and commented later that the movie hadn't been all that good, but the halftime show was brilliant.

Anyhow, I've been interested in these strange critters for a long while, even though I don't think they're sculpted from life.  One of my numerous hobbies is pottery, and I've taken to making ceramic gargoyles.  Here's one of my better efforts: 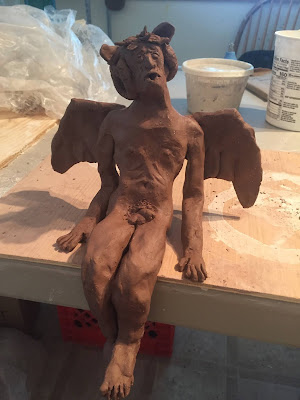 His expression seems to say, "How the hell did I get up here on this roof?  And why am I naked?"  To which I can only answer that I've been to parties like that myself.

I was a little surprised to find out that what I make aren't technically gargoyles.  The word gargoyle is a cognate to the French gueule (throat), and refers to creepy statues on church roofs that were used as rain spouts.  The statues that I make, and others like it that are devilish winged guys but don't spit out water when it rains, are grotesques.  (The origin of that word, if you're curious, is the Italian opera grottesca, which means "a work of art found in a grotto.")

But that's a technicality.  I did a bit of research and I found out from the art history site My Modern Met that the gargoyle legend apparently started because St. Romain, who was the Bishop of Rouen, France in the seventh century, was credited with saving the town from a hideous, fire-breathing monster called la gargouille.  St. Romain conjured up some saintly power and subdued the beast, which then was burned at the stake.

This brings up the question of the efficacy of burning a creature who breathes fire.  You'd think they'd be more susceptible to drowning, or even to suffocating if you throw a thick blanket over them.  Apparently it worked anyhow, although as I would have predicted the head and neck of the monster wasn't consumed, so St. Romain nailed it up on the cathedral wall as a waterspout.

And thus the tradition was born. 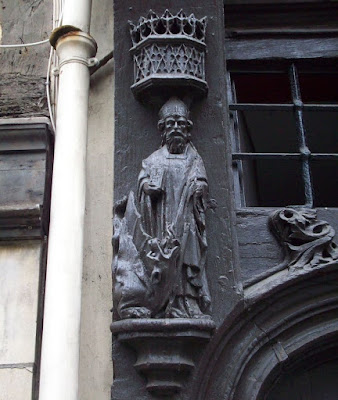 Not all the church fathers were as keen, however.  The prominent twelfth-century Benedictine monk St. Bernard of Clairvaux thought putting them on churches was a bad idea, and said so in no uncertain terms:

What are these fantastic monsters doing in the cloisters before the eyes of the brothers as they read?  What is the meaning of these unclean monkeys, these strange savage lions, and monsters?  To what purpose are here placed these creatures, half beast, half man, or these spotted tigers?  I see several bodies with one head and several heads with one body.  Here is a quadruped with a serpent's head, there a fish with a quadruped's head, then again an animal half horse, half goat...  Surely if we do not blush for such absurdities, we should at least regret what we have spent on them.

It didn't have much effect, however.  The use of gargoyles on church roofs went on well into the nineteenth century, when architect Eugène Viollet-le-Duc made a name for himself by going around renovating old Gothic cathedrals and basically gargoyling the hell out of them.

I have to say that I approve, and that I like them a great deal better than I do a lot of religious statuary.  I didn't know about the origins either of the word or the legend, so it was fun to find that out.  I'll probably make a bunch more of them, although my wife has instructed me to make some that aren't as creepy as the one pictured above.  Like, puppies and kittens with wings, or something.

I'll see what I can do, although I'm not sure it qualifies as a gargoyle if it isn't at least a little scary.