After yesterday's rather humbling post about how easy it is to fool the human senses, today we get knocked down another peg or two with some new research showing our visual perception is beat hands down...

You've probably heard the term refresh rate used in regards to computer monitors, but it also applies to our eyes.  The photoreceptors in your retina have to reset after firing, and during that time -- the refractory period -- the receptor cell is insensitive to further stimuli.  I recall finding out about this in my animal physiology class at the University of Washington thirty years ago, and finding out that human photoreceptors reset in about 1/60th of a second.  This is why the flicker in a fluorescent light is barely detectable to the human eye; it's driven by the oscillations of alternating current at a frequency of sixty hertz; and the fact that we have millions of photoreceptors, all out of phase with each other, smooths out the signal and makes it look like one continuous, evenly-bright light.

To a fly, however, which has a refresh rate double ours -- about 120 times per second -- a fluorescent light would look like a strobe, brightening and dimming every sixtieth of a second.

Must be really freakin' annoying.  Yet another reason I'm glad I'm not a fly.

But even they are not the fastest.  A paper in Biology Letters this week describes research into the visual systems of a species of snapping shrimp (Alpheus heterochaelis), which already is badass enough -- it snaps its claws together with such force that it creates a shock wave in the water, stunning its prey.  And this little marine crustacean has a refresh rate of 160 times per second.

So what looks like a blur of motion to other animals is visible as clear, discrete images moving across its field of vision.

Not only that, they have one of the widest ranges of sensitivity to light level known, functioning well with only 1 lux of incident light (the light intensity of late twilight) all the way up to 100,000 lux (direct, intense sunlight). 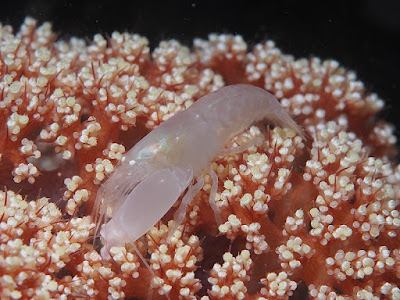 The snapping shrimp isn't the only amazing crustacean out there.  Its cousins, the mantis shrimps (Order Stomatopoda) don't just snap their claws and stun their prey, they actually punch the shit out of them.  They can accelerate their claws at the astonishing rate of 102,000 m/s^2, delivering a force of 1,500 Newtons (equivalent to the Earth's gravitational pull on a 150 kilogram mass).  Not only that, but they move their claws so quickly they overcome the cohesion of the water molecules as they pass through, creating vapor-filled bubbles (a process called cavitation) in their wake.  These bubbles then collapse with astounding force, delivering a second deadly shock wave to the unfortunate recipient.

No wonder the folks in the Caribbean have nicknamed the native species of mantis shrimp "the thumb-splitter."

But wild as that is, it's not why I brought up mantis shrimp.  They have the most sensitive color vision of any animal known.  Humans are (mostly) trichromats, having three functioning types of color receptor in our eyes.  Dogs are dichromats -- they have only two, which is why their color acuity is worse than ours.  A few lucky humans, and a great many bird species, are tetrachromats, having four kinds of color receptors.

Mantis shrimp have sixteen.  They can not only see in the ultraviolet region of the spectrum -- a range of light completely invisible to the human eye -- they can detect polarization angle, and even have sensors for detecting circular polarization, something that is thought to be unique in the animal kingdom.

Why they need this many different kinds of light receptors is unknown, although it probably has to do with predator-prey interactions -- finding lunch and avoiding being made into lunch.  With so many different strategies used by shallow tropical marine species to confound the eye -- shimmering scales, transparency, cryptic coloration, countershading -- having eyes that beat everyone else in sensitivity and range would be a pretty neat adaptation.

So that's yet another excursion into the weird world of sensory perception.  It never fails to fascinate me to think about what a different kind of animal's experience of the world must be like.  As philosopher Thomas Nagel pointed out, the only way to know what it's like to be a bat is to be a bat; all of our ideas of echolocation and flight and being nocturnal only gives us the answer to what it's like for a human to think about being a bat.

But even so, and all pondering about the mind/body problem aside, I can't help but wonder what the world looks like to a shrimp.