I'm fortunate to have been raised in a bilingual home.  My mother's first language was French, and my dad (son of a father of French and a mother of Scottish descent) was also fluent, although much more comfortable in English.  The result is that my parents spoke French in front of me (and also with our older relatives) when they didn't want me to understand, which was a hell of an incentive to learn listening comprehension, although -- as I found out later -- a bit of a problem when you're actually called upon to speak it yourself.

My Uncle Sidney, my mother's brother, didn't help matters much, because he was extremely fluent in the art of the French swear word.  He taught me a good many really creative expressions when I was still quite young, but I found out pretty quickly that when Uncle Sidney said, "Go ask your mother what ____ means," it was better to remain in ignorance than to incite my prim and prudish mom's ire.

Eventually, despite the impediments, I learned to speak French fairly well.  I distinctly recall, though, how baffled I was when I first learned the French counting system.

Even living in a Francophone household, it struck me as weird right from the get-go.  One through ten, no problem.  Like English, eleven and twelve have their own special names (onze and douze).  But... so do thirteen through sixteen.  Then seventeen, eighteen, and nineteen translate, respectively, to ten-seven, ten-eight, and ten-nine.

Things don't go really off the rails until you hit seventy.  Sixty is soixante; seventy is soixante-dix (sixty-ten). Then we reach eighty -- quatre-vingt -- literally, "four-twenty."

For what it's worth, ninety-seven is quatre-vingt dix-sept -- four-twenty ten-seven.

I read French pretty well, but when I hit a number with more than two digits, I still have to stop and do some mental arithmetic to figure it out.

Turns out I'm not alone.  A study by Iro Xenidou-Dervou of Vrije Universiteit Amsterdam et al. found that even when you control for other factors, the language a child speaks (so the counting system (s)he learns) has an effect on the facility with which the child learns arithmetic.  The more it corresponds to a simple, regular base-10 system, the better the child is at learning math.

On the extremely logical side, we have Chinese.  In Mandarin, ninety-two is jiǔ shí èr -- "nine-ten-two."  We've already looked at French (where it would be "four-twenty-twelve").  But for my money, the winner in the what-the-fuck-were-you-thinking department would be Danish, where ninety-two is tooghalvfems, where halvfems (ninety) is an abbreviation of the Old Norse halvfemsindstyve, or "four and a half times twenty." 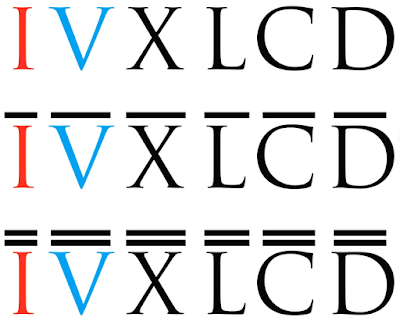 And don't even get me started about Roman numerals. [Image licensed under the Creative Commons Дмитрий Окольников, Roman numerals!, CC BY-SA 4.0]

"The fact that they were the same in every other aspect, apart from the condition where two digits showed up, shows you that it's the language that is making the difference," said study lead author Xenidou-Dervou, in an interview with BBC.  "The effects are small, and yet this is numeracy at its most basic, just estimating a number on a line.  As adults, we're doing very complicated tasks in our daily lives, and so even small difficulties caused by the number naming system could potentially be an additive hurdle to everyday mathematical skills."

All of this brings back a subject that's fascinated me since my days as a graduate student in linguistics: the Sapir-Whorf hypothesis.  This is the idea that the language we grow up with profoundly influences our brain wiring -- so not only does our cognitive development influence our language learning, our language learning influences our cognitive development.  I found out about a particularly cool example of this when I was reading the brilliant book The Last Speakers, by K. David Harrison, which was an attempt to chronicle some of the world's most endangered languages.  When Harrison was traveling with a tribe in Siberia, he was intrigued to find out that they had no words for "right," "left," "behind," and "in front of."  Everything was described in terms of the cardinal directions.  So right now, my computer isn't in front of me; it's south of me.  (They also have direction-related words meaning "upstream" and "downstream.")

Anyhow, Harrison was trying to talk to one of the tribal elders about why that was, and all he got from him for a time was frank bafflement.  It was as if he couldn't even quite understand what Harrison was driving at.  Then, all of a sudden, he burst into gales of laughter.  "Really?" he said to Harrison.  "That's how you see the world?  So that tree is in one place, but if you turn around, it's now in a different place?  Everything in the world is relative to the position of your body, so when you move, the entire universe shifts around you?  What an arrogant people you must be!"

I know that these days, Sapir-Whorf is kind of out of vogue with linguists, but studies like the one by Xenidou-Dervou et al. make me realize how deeply woven together our cognition and our language is.  We create our world with our words, and the words we learn shape the reality we are able to see.