Mirror, mirror, on the wall

Sometimes my mental processes are like a giant exercise in free association.

I've always been this way.  My personal motto could be, "Oh, look, something shiny!"  When I was a kid my parents had a nice set of the Encyclopedia Brittanica, and in those pre-internet days I used them for research for school projects.  So I'd start by looking something up -- say, the provisions of the Twelfth Amendment to the United States Constitution -- and I'd notice something in the article, which I'd then have to look up, then I'd notice something there, and so forth and so on, and pretty soon I was reading the entry about the mating habits of wombats.

My younger son inherited this tendency.  Conversations between the two of us resemble a pinball game.  More than once we've stopped and tried to figure out how we got from Point A to Point Z, but sometimes the pathway is just too weird and convoluted to reconstruct.  Maybe that's why I love James Burke's iconic television series Connections; the lightning-fast zinging from event to event and topic to topic, which Burke uses to brilliant (and often comical) effect, is what's happening inside my skull pretty much all the time.

It's a wonder I ever get anything done.

The reason this comes up is because I was chatting with a friend of mine, the wonderful author K. D. McCrite, about trying to find a topic for Skeptophilia that I hadn't covered before.  She asked if I'd ever looked at the role of mirrors in claims of the paranormal.  I said I hadn't, but that it was an interesting idea.

So I started by googling "mirrors paranormal," and this led me to the Wikipedia article on "scrying."  Apparently this was the practice of gazing into one of a wide variety of objects or substances to try to contact the spirit world.  The article says:


The media most commonly used in scrying are reflective, refractive, translucent, or luminescent surfaces or objects such as crystals, stones, or glass in various shapes such as crystal balls, mirrors, reflective black surfaces such as obsidian, water surfaces, fire, or smoke, but there is no special limitation on the preferences or prejudices of the scryer; some may stare into pitch dark, clear sky, clouds, shadows, or light patterns against walls, ceilings, or pond beds.  Some prefer glowing coals or shimmering mirages. Some simply close their eyes, notionally staring at the insides of their own eyelids, and speak of "eyelid scrying."

I think next time I'm taking a nap and my wife wants me to get up and do yard chores, I'm going to tell her to leave me alone because I'm "eyelid scrying."

Anyhow, what scrying seems like to me is staring into something until you see something, with no restrictions on what either something is.  It does mean that you're almost guaranteed success, which is more than I can say for some divinatory practices.  But this brought me to the "Hermetic Order of the Golden Dawn," because they apparently recommended mirror-scrying as a way of seeing who was exerting a positive or negative effect on you, and believed that if you stared into a mirror you'd see faces of those people standing behind you.  This was preferably done in a dimly-lit room, because there's nothing like making everything harder to see for facilitating your seeing whatever you thought you were gonna see. 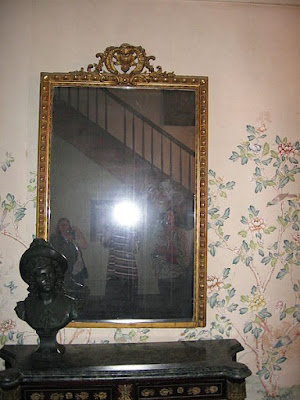 On this site, there is a list of famous members, and to my surprise one of them was Charles Williams, a novelist who was a close friend of J. R. R. Tolkien and C. S. Lewis.  His novels Descent into Hell, All Hallow's Eve, The Greater Trumps, The Place of the Lion, and War in Heaven are fascinatingly weird, like nothing else I've ever read -- a combination of urban fantasy and fever dream.  He was also a devout Christian, so his membership in the Golden Dawn strikes me as odd, but I guess he wasn't the only one to try blending Christianity with neo-druidic mysticism.

At this point I felt I was getting a little far afield from my original intent, so I decided to leave Wikipedia (with its multiple internal links and temptations to wander) and found a site about the history of mirrors and their uses.  On this site I learned that there's a tradition of covering all the mirrors in the house when a family member dies, to prevent the dear departed's soul from becoming trapped in the mirror.  The problem is, if the deceased's spirit wants to hang around, it can simply sidestep -- there's a whole lore about spirits and other paranormal entities which can only be seen out of the corner of your eye.

This immediately grabbed my attention because it's the basis of my novella Periphery, which is scheduled to come out in a collection called A Quartet for Diverse Instruments in the summer of 2021.  The idea of the story is that an elderly woman decides to have laser surgery to correct her nearsightedness, and afterwards she starts seeing things in her peripheral vision that no one else sees, and which disappear (or resolve into ordinary objects) when she looks at them straight-on.

The problem is, these things are real.

This led me to look into accounts of "shadow people" who exist on the fringes of reality and are only (partly) visible as dark silhouettes that flicker into and out of existence in your peripheral vision.  From there, I jumped to a page over at the ever-entertaining site Mysterious Universe about "static entities," which are not only vague and shadowy but appear to be made of the same stuff as static on a television screen.  I don't want to steal the thunder from Brent Swancer (the post's author) because the whole thing is well worth reading, but here's one example of an account he cites:


All of a sudden I had a really powerful urge to look at the end of the hallway.  We had recently brought a coat stand from a bootsale and this was in the middle of the hallway now.  As I stood there I saw a human outline but entirely filled with TV like static, I remember little bits of yellow and blue in it but was mainly white and it came out of the bedroom on the left and was in a running stance but it was really weird because it was in slow motion and it ran from the left to the back door on the right.  As it ran it grabbed the coat stand and pulled it down with it and it fell to the floor. I was just standing there after in shock...  I ran to my sister and told her what happened and when we went back to the hallway the stand was still on the floor.  That was the only time I saw it, I don’t know why I saw it or why it pulled the stand down, it was all just surreal.  I did have some other experiences in that house that were paranormal so maybe it was connected.

But unfortunately at the end of this article was a list of "related links," and one of them was, "Raelians' ET Embassy Seeks UN Help and Endorsement," which is about a France-based group who believes that the Elohim of the Bible were extraterrestrials who are coming back, and they want the United Nations to prepare a formal welcome for them, so of course I had to check that out.

At this point, I stopped and said, "Okay, what the hell was I researching again?"  The only one in the room with me was my dog, and he clearly had no idea.  So my apologies to K. D., not to mention my readers.  The whole mirrors thing was honestly a good idea, and it probably would have made an awesome post in the hands of someone who has an attention span longer than 2.8 seconds and isn't distracted every time a squirrel farts in the back yard.  But who knows?  Maybe you learned something anyhow.  And if you followed any of the links, tell me where you ended up.  I can always use a new launch point for my digressions.