I got up this morning and with some reluctance looked at the news, and I was immediately reminded of something a former student of mine said years ago.

The subject was environmental degradation and climate change, and the question I asked the class was when Americans would be motivated in sufficient numbers to initiate a real change in our environmental policy.  What she said, near as I can recall, was this.

"It won't happen until things have gotten a great deal worse.  Nothing will change until ordinary middle-class people with houses and cars and bank accounts turn on the taps in their kitchen and no water comes out.  Until their kids can't walk to school without wearing gas masks because of the air pollution.  When they go to the grocery store and find the shelves empty.  We're all too comfortable, and when we're comfortable, it's too easy to disappear into that comfort and assume it could never be any other way."

I think we might have crossed that line, not with respect to the environment, but in the governance of the United States as a whole.

In a few short weeks we've been catapulted into chaos.  The powder keg was already there, fashioned over long careful years of preparation by the constant fear-talk of people like Rush Limbaugh and Sean Hannity.  That message of the Big Bad Other is, honestly, what propelled Donald Trump into the presidency, with his constant harping on illegal aliens destroying America.  Your way of life is in significant peril, they said -- all the while creating exactly the conditions that would imperil our way of life once the match was lit.

What exactly set the powder keg off was almost irrelevant; it could have been anything.  In this case, it was twofold; the lockdown from the COVID-19 pandemic, coupled with the murder of a black civilian by a white policeman who had already been investigated multiple times for using excessive force.  It's like the assassination of the Archduke Franz Ferdinand and his wife by Serbian extremist Gavrilo Princip in Sarajevo in 1914.  That one act was the first card falling, but the entire house of cards was already there -- and in five years, twenty million people were dead and whole countries devastated beyond recognition.

And like in World War I, the people who could step in and prevent the catastrophe instead are inflaming matters and making it far, far worse.  Donald Trump, who will do anything to protect his bloated ego, was so pissed off by being mocked as "BunkerBoy" on Twitter for his escape into a protected bunker and refusal to appear publicly that he decided to stage a photo-op to prove what a tough, macho strongman he is.  He had the police attack peaceful demonstrators in front of St. John's Episcopal Church in Washington D. C. with tear gas and rubber bullets, then marched out in front of it holding a Bible (upside down) and threatened to unleash the military on civilians exercising their right of assembly.

"If the city or state refuses to take the actions that are necessary to defend the life and property of their residence," he said, "then I will deploy the United States military and quickly solve the problem for them." 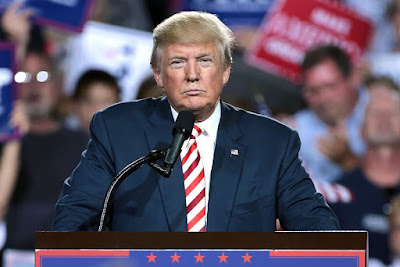 His loyal ass-kissers were effusive in their praise.  "No one else would have had the guts to do this," crowed former governor of Wisconsin Scott Walker.  Florida Representative Matt Gaetz said this was the start of the military hunting down "members of Antifa... like we do those in the Middle East."  Not to be outdone, Senator Tom Cotton of Arkansas had this to say:


Anarchy, rioting, and looting needs to end tonight.  If local law enforcement is overwhelmed and needs backup, let’s see how tough these Antifa terrorists are when they’re facing off with the 101st Airborne Division.  We need to have zero tolerance for this destruction.  And, if necessary, the 10th Mountain, 82nd Airborne, 1st Cav, 3rd Infantry—whatever it takes to restore order.  No quarter for insurrectionists, anarchists, rioters, and looters.

And you know what "no quarter" means.

We're on a precipice right now, and the people who could rein in this lurching, out-of-control president -- the men and women of his own party -- are refusing to do anything but throw gasoline on the fire.  The only possible solution, the only thing that might keep us from descending into chaos, is if the ordinary middle-class people like the ones my student spoke of will stand up and say "Enough."  We've got to be willing to give up our comfortable, privileged safety and risk being seen and heard by a government that at the moment is doing everything in its power to stop citizens from speaking up and acting in the cause of justice.

I'll end with a quote from Sinclair Lewis's It Can't Happen Here, which was written in 1935 but is frighteningly prescient:

A few months ago I thought the slaughter of the Civil War, and the agitation of the violent Abolitionists who helped bring it on, were evil.  But possibly they had to be violent, because easy-going citizens like me couldn't be stirred up otherwise.  If our grandfathers had had the alertness and courage to see the evils of slavery and of a government conducted by gentlemen for gentlemen only, there wouldn't have been any need of agitators and war and blood.

It's my sort, the Responsible Citizens who've felt ourselves superior because we've been well-to-do and what we thought was 'educated,' who brought on the Civil War, the French Revolution, and now the Fascist Dictatorship.  It's I who murdered Rabbi de Verez.  It's I who persecuted the Jews and the Negroes.  I can blame no Aras Dilley, no Shad Ledue, no Buzz Windrip, but only my own timid soul and drowsy mind.  Forgive, O Lord!

Is it too late?

Posted by Gordon Bonnet at 4:51 AM