A friend of mine, knowing my interest in linguistics and birdwatching, sent me a link to a fairly mindblowing post on the blog Corvid Research a couple of days ago.  But first, a little background.

Bird communication is generally not considered to be language.  The usual definition of language is "arbitrary symbolic communication that has a characteristic and meaningful structure."  The "arbitrary" bit is sometimes misunderstood; it doesn't mean any sounds can mean anything within a language (something that's obviously not true).  In this context, it means that the sound-to-meaning correspondence is arbitrary, in that the word "dog" is no inherently doggier than the French word chien or the Japanese word inu.  With the exception of a few onomatopoeic words, like "bang" and "swish" and "splat," the sound of the word itself has no particular connection to the concept it represents.

So bird song fails the definition of language on a number of counts.  When the Carolina wrens that nest in our back yard start their outsized calls of "TEAKETTLE TEAKETTLE TEAKETTLE" at four in the morning, those vocalizations don't mean anything more than "I'm a male bird in a territory and you need to leave" or, to any available females, "Hey, baby, how about it?"  They're not capable of representational language, in the sense of using a different set of sounds to represent discrete concepts.

The situation blurs considerably when you look at parrots, many of which can learn to mimic human speech convincingly.  An African gray parrot named Alex learned, with the help of cognitive behavior Irene Pepperberg, not only to mimic speech but to understand that it has meaning, connecting sounds to objects in a consistent fashion.  There's no indication that Alex comprehended syntactic structure -- and the jury's still out as to whether he was simply learning to behave in a particular way to get a reward, similar to training a dog to sit or stay or roll over.  (Although -- as you'll see if you watch the video -- Alex did know how to count, at least up to five, which is pretty impressive.)

The blur only gets worse when you consider corvids, the group that contains crows and ravens.  Corvids are widely considered to be among the most intelligent birds, and their ability to problem solve is astonishing.  They do a great many higher-level behaviors, including having a sophisticated sense of play -- such as the crow that used a plastic lid as a sled on a snow-covered roof, doing it for no apparent reason other than the fact that it was fun.  But some research released recently in the journal EvoLang has shown another facet of corvid intelligence; they can apparently distinguish between different human languages. 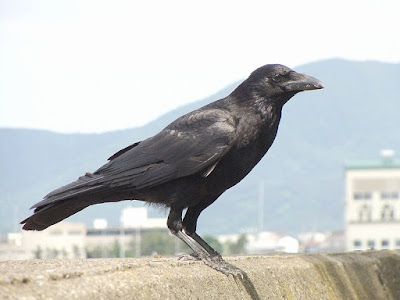 Sabrina Schalz (Middlesex University) and Ei-Ichi Izawa (Keio University) studied eight large-billed crows (Corvus macrorhynchos) that were raised in captivity in Japan, cared for by fluent Japanese speakers.  Schalz and Izawa wanted to find out if the birds were able to distinguish that language from another, so they played recordings of people speaking Japanese and people speaking Dutch.  The Japanese recordings didn't elicit much of a response; their attitude seemed to be, "Meh, I've heard that before."  But the Dutch recordings were a different story.  The crows gathered around the speaker, and sat perfectly still, their attention fixed on the sounds they were hearing.

It was clear that they were able to recognize the sound of Dutch as being foreign!

The cadence of a language, and how one differs from another, is a fascinating topic.  It has not only to do with the phonemic repertoire (the exact list of sounds that occur in the language) but pacing, stress, and tone.  The latter is why to non-Mandarin speakers, Mandarin sounds "sing-song" -- the rising and falling pitches actually change the meanings of the words being spoken.  Put another way, the same syllable spoken with a rising tone means something entirely different to the same syllable spoken with a falling tone, something that is not true in non-tonal languages like English (with minor exceptions such as the rising tone at the end of a sentence indicating a question).

Besides the different sounds in the Japanese language as compared to Dutch, the two languages also differ greatly in how words are stressed.  Japanese syllables can differ in length (and in fact, that carries meaning, much as tone does in Mandarin), but they're all stressed about equally.  This is why the way most Americans pronounce the city name Hiroshima is distinctly non-Japanese -- usually either hi-RO-shi-ma or hi-ro-SHI-ma.  The Japanese pronunciation stresses the syllables evenly.  (Try saying the word out loud with no change in syllable stress, and you'll hear the difference.)

So what were the crows picking up on?  I doubt seriously that they were thinking, "Okay, I don't know that word," but was it the sound system differences, the stress patterns, or something else?  Probably impossible to know, although it would be interesting to try to tease that out -- having someone speak Dutch with artificially even stress, or Japanese with non-Japanese syllable stress, and seeing what the reaction is, would be an interesting next step.  If it's the sound repertoire, then the reaction of crows to two mutually-unintelligible languages with similar phonetics, one of which they'd heard and one which is novel -- say, Dutch and German -- should elicit identical reactions.

Whatever's going on here, it's fascinating, and another indication of how intelligent these creatures are.  And it does make me wonder if I should be a little more careful when I'm talking outdoors -- who knows?  Maybe the crows are taking notes of what they overhear, in hopes of eventual world domination.