The concept of suspended animation has been a staple of science fiction for as long as I can recall.  Even the generally abysmal 1960s series Lost in Space got that much right; despite really fast flight speeds, it was still a long enough voyage to Alpha Centauri that the intrepid crew of the Jupiter 2 were better off flash-frozen in big glass tubes for the majority of the voyage through the vast -- and boring -- dark of interstellar space. 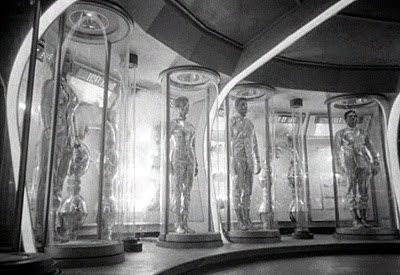 Unfortunately, science fiction being what it is, usually something goes wrong.  In the case of Lost in Space, it was a robot that had been corrupted by the evil Doctor Zachary Smith.  Sort of the same thing happened in 2001: A Space Odyssey, if you'll recall; the computer system, HAL 9000, more or less lost its marbles and killed almost the entire crew, all but two of whom were in suspended animation.

Then there's poor Han Solo, frozen in carbonite for delivery to Jabba the Hutt.

So we'd have to be careful with it.  It's an idea with multiple beneficent Earth-bound applications, however.  If doctors had the capacity to induce suspended animation in humans, it could be a literal lifesaver -- in cases of stroke, a short-term shutdown of body and brain might slow the irreversible death of neural tissue, giving surgeons more time to effect repairs.  There's also the possibility of cryogenics, the (safe) freezing of people with incurable diseases, who are then held in stasis until a cure is discovered.

What's curious is that it's been known for years that many animals do this naturally; it's called hibernation.  People usually think of bears, but bear hibernation isn't that remarkable -- their core body temperatures drop by only five or six degrees.  (To be fair, an equal drop would usually be fatal to a human.)  The champion hibernators are Arctic ground squirrels (Spermophilus parryii) whose body temperatures drop to -2 C in the middle of winter.  You read that right; their body temperatures are actually below the freezing temperature of water, but their blood and other bodily fluids stay liquid because the solutes dissolved in them lower the freezing point (for the same reason that salting an icy sidewalk melts the ice).  And when they're hibernating, ground squirrels are mentally gone.  Anyone who has done back-country winter camping knows not to mess with a hibernating bear -- they'll wake up and defend themselves pretty quickly.

On the other hand, you could juggle hibernating ground squirrels and they won't stir.

Not that I'm recommending it, mind you.

It's not known why some mammals can get away with this, and others -- like us -- simply die if our core temperature drops too much.  But one step toward the safe induction of suspended animation was the subject of a paper this week in Nature, in which scientists found that to induce hibernation-like torpor in mice, all you had to do was to stimulate a particular neural pathway.  Block the stimulation, and the mice woke right back up, apparently none the worse for the experience.

In the paper "Neurons That Regulate Mouse Torpor," by a team led by neurobiologist Sinisa Hrvatin of Harvard Medical School, we read about a gene called Fos that is active in neurons when mice are in natural torpor.  Stimulate that gene in awake mice, the researchers believed, and it would induce torpor.

That's exactly what happened.  The gene acted almost like a switch, rapidly flipping mice between being active and being asleep, with no apparent side effects.  Whether humans -- who also have a Fos gene -- would respond the same way, however, is a matter of conjecture at this point.  We don't undergo natural torpor, so it's anyone's guess whether stimulating Fos in the corresponding neurons in a human brain would make us conk out, or if it would just make us tired and grumpy, or something else entirely.

Also unknown is whether individuals in suspended animation for a long time would continue to age while their metabolic processes were being suppressed.  The guess is that they wouldn't -- but that point has yet to be conclusively demonstrated.

But it's a promising start.  "Our findings open the door to a new understanding of what torpor and hibernation are, and how they affect cells, the brain and the body," study lead author Hrvatin said, in a press release from Harvard Medical School.  "We can now rigorously study how animals enter and exit these states, identify the underlying biology, and think about applications in humans.  This study represents one of the key steps of this journey."

Study senior author Michael Greenberg is thinking big, though.  "It’s far too soon to say whether we could induce this type of state in a human, but it is a goal that could be worthwhile," Greenberg said.  "It could potentially lead to an understanding of suspended animation, metabolic control and possibly extended lifespan.  Suspended animation in particular is a common theme in science fiction, and perhaps our ability to traverse the stars will someday depend on it."

Which is a pretty exciting possibility.  I'm hoping that if this becomes a reality, the planners will take into account homicidal robots and computer systems, not to mention huge slug-like crime lords.  Because I'm tempted to volunteer, but I'd rather not end up frozen in a slab of carbonite, hanging as a wall decoration in some intergalactic gangster's palace of debauchery.