The walk of life

It's remarkably difficult to decide exactly what we mean when we say something is alive.

As a biologist, this is kind of embarrassing.  After all, "biology" means "the study of life."  So in a very real sense, we're studying something when we're not even sure what it is.  Oh, sure, there are some clear-cut examples; a dog is alive, a rock is not.  But amazingly enough, when you try to pinpoint what the dog is doing that the rock is not, you get into some shaky ground -- and rules that are rife with exceptions.

How about "capable of reproducing?"  You can't just say "reproduces," because a good many organisms don't reproduce because of choice or circumstance.  And let's even throw out the timeworn exceptions of the hybrid, infertile mules and ligers as being genetic anomalies.  But what about worker ants?  Worker ants are females that had the development of functional reproductive anatomy suppressed, so they are completely infertile; but they're not genetic accidents like infertile hybrids are.  They are not even theoretically capable of reproducing, but I doubt seriously anyone would argue that they're not alive.

Then, there's "limited life span."  Living things die, usually after a length of time characteristic of the particular species.  However, the bristlecone pine (Pinus longaeva) doesn't seem to have an upper bound on its life span.  Most plants, even most trees, age out after a while -- birch trees live thirty to forty years, silver maples eighty or ninety, red oaks two hundred, white oaks as much as eight hundred -- bristlecone pines don't do that.  Unless they meet with misfortune, they just keep on living.  A bristlecone in the Inyo National Forest of California is 4,851 years old.  To put that into perspective, when the Great Pyramid at Giza was built, this tree was already three hundred years old.

And it isn't just plants.  There's a jellyfish, Turritopsis dohrnii, that is effectively immortal -- when it reaches senescence, it begins to despecialize its cells, returning to the polyp (juvenile) stage, then redifferentiating.  There seems to be no limit to the number of times it can do this -- putting the Time Lords with their twelve regeneration cycles to considerable shame.

And don't get me started on viruses, which are an exception to the majority of the usually-accepted characteristics of life.

The upshot is that the whole topic is way more controversial than you'd think.  Even such seemingly-obvious ones as "composed of one or more cells" and "encodes genetic information as DNA or RNA" may be looking at things from an Earth-bound perspective; life on other planets might well compartmentalize their metabolic processes and store their genetic information in entirely different ways, and still be recognizably "alive."

There's one characteristic, though, that very few people whose opinions count will argue over; living things are subject to evolution by natural selection.  (Okay, the creationists will argue like hell about it, but they conspicuously fail on the "opinions counting" qualification.)  Clearly living things evolve, and it's hard to imagine a non-living thing that would do so.  This, then, would make "evolution by natural selection" not only a necessary condition for being alive, but a sufficient one.

Which would settle once and for all the questions of whether viruses are alive.  They clearly evolve, which is why one flu shot doesn't make you immune for life. 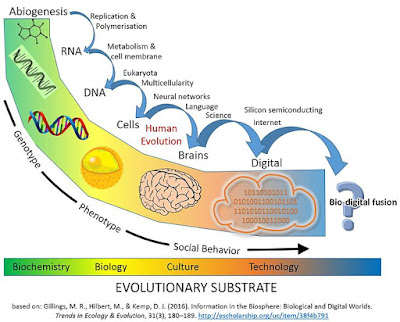 Well, as I am wont to do, I've been leading you down the garden path.  Because if you have been nodding your head and saying, "Okay, that makes sense" to what I've written above...

... scientists in a research lab in Germany have just created life.

Christian Mayer, a chemist at the Center for Nanointegration, and Ulrich Schreiber, a geologist at the University of Duisberg-Essen, have long been of the opinion that life on Earth began underground, not in shallow tide pools (the more common hypothesis).  The heat and pressure in deep crevices in the Earth create conditions that would lead to the formation of vesicles -- water-filled bubbles surrounded by a lipid-bilayer membrane.  These are thought to be the earliest cells, eventually trapping bits of RNA and leading to the first true life-forms.

So Mayer and Schreiber decided to recreate these deep crevices.  They allowed the temperature in lab apparatus simulating deep-Earth characteristics to fluctuate between 40 and 80 C, and the pressure between 60 and 80 bar.  Sure enough, under those conditions, a "primordial soup" forms vesicles readily.  Like soap bubbles, they are created and destroyed rapidly, some lasting longer than others.

But unlike soap bubbles, these vesicles evolve.

For full impact, here's the relevant quote from the press release:


In their laboratory experiment, they regularly changed the pressure in the system at 20-minute intervals, thereby changing the quality of the solvent, as it also occurs in nature through tidal forces and geysers.  In the process, the vesicles were periodically destroyed and re-formed.  Thus, a total of 1,500 generations of vesicles were created and disintegrated again within two weeks.

The researchers discovered that an increasing number of vesicles survived the generation change.  Analyses showed that these vesicles had embedded specific sequences of 10 to 12 amino acids from the pool of possible peptides into their membrane in a cluster-like manner.  Further tests, specifically carried out with one of these peptides, revealed three effects on the vesicles in question: They became thermally more stable, smaller and hence more resistant and – most importantly – the permeability of their membrane was considerably increased.

Put simply, the vesicles underwent natural selection and evolved to increase their stability and permeability.  The embedded peptides they mention are the first approach to the transmembrane channel proteins that every cell has, allowing it to transport materials across the membrane as needed.

"As we have simulated in time-lapse, functions could have been created billions of years ago that made such vesicles stable enough to come to the surface from the depths, for example with the flow of tectonic fluids or during geyser eruptions," said study co-author Ulrich Schreiber.  "Subsequently, a first metabolism with concentration gradients as an energy source could have developed.  If the ability to self-replicate is eventually acquired, then even from a biological point of view an inanimate component slowly becomes a living organism, a first cell."

So there you are.  Mayer and Schreiber, being cautious scientists, are not saying they've created life, but the implication is there -- and even the most hesitant amongst us (not you, creationists) would have to admit that whatever you want to call it, this represents a huge step toward generating something that is unequivocally alive.

Which I find to be somewhere beyond mind-boggling.