Writing's on the wall

I was chatting with my friend, author and all-around cool person K. D. McCrite, a couple of days ago about superstitions.

It probably won't come as any surprise that I'm not superstitious.  About the only time that particular irrationality raises its ugly head is in my occasional conviction -- usually when I'm already in a foul mood -- that inanimate objects are conspiring to get in my way, fall out of my hand, break, or otherwise further fuck up my day.  My logical brain tells me that this is probably because I'm in a bad temper and more prone to being careless and rough with handling things, but sometimes it really does seem like the various objects around me have decided to infuriate me out of nothing but pure malice.

Other than that, though, I'm inclined to consider superstitions so bizarre that it's incomprehensible that anyone would have come up with them in the first place.  K. D. mentioned that growing up in rural Missouri, she used to hear that if you dropped a dishrag, company was coming.  Same thing, apparently, if your nose itches; but only a few states south, where I grew up in southern Louisiana, your nose itching means you're going to kiss a fool.  We didn't have one for company coming, at least not that I recall; but if you've got company and you want them to leave, all you have to do is stand a broom up in the corner near the front door.

Of course, my guess is that if your company knows the superstition, and they see you standing a broom up in the corner, they'll get pissed off and leave.  So this might fall into the "self-fulfilling prophecy" department.

Spurred by that discussion, I started looking into various superstitions in different cultures, and man, there are some weird ones, making the bad luck brought by black cats, broken mirrors, and walking under ladders sound positively normal.  Here are a few I came across:
(My sources for the above, if you're curious, are here, here, and here.)

I wonder how the hell these superstitions started.  I know that for some superstitions, the origin is in the religious beliefs of the culture; the practice of throwing spilled salt over the left shoulder actually dates from Roman times, where salt was a valuable commodity -- in fact, the English word salary comes from the Latin word meaning salt -- and spilling it was considered careless and wasteful.  To make up for it you were supposed to give a pinch of it to the household spirits, the Lares and Penates, who hovered around behind you watching you eating dinner.

Because that's not creepy at all. 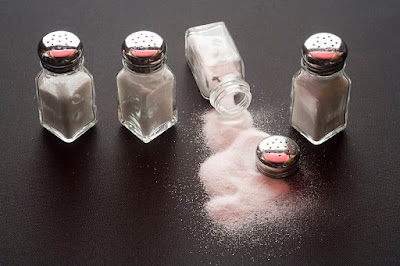 But for some of them, it's hard to imagine any events that could have led to the conviction that they were true.  I mean, "rabbit rabbit?"  Did people in medieval England try various animal names every day until they found a combination of animal and day of the month that preceded their having a good day?  And I'm sorry, stepping in dog shit is not in any sense auspicious.

I own two dogs and I know whereof I speak.

It does bear mention that there are a few completely bizarre-sounding superstitions that have at least semi-logical origins.  In northern Germany, for example, there's an old belief that when a baby is born, the grandma is supposed to kiss the baby's forehead, and if she tastes salt, the baby will be sickly and die young.  This seems ridiculous -- until you find out that northern Germany has the world's highest incidence of the genetic disorder cystic fibrosis, which has as one of its symptoms extremely salty sweat.

Another one that has a genetic origin is the old prohibition amongst the Basques -- especially the women -- against marrying non-Basques.  While on the surface this seems like the usual insularity and cultural/ethnic purity nonsense, there's more to it.  Similar to the German belief, the superstition here is that a Basque woman marrying a non-Basque man will be cursed to have their children die in infancy.

Which turns out to have a kernel of truth.  The Basques have the highest incidence in the world of the Rh negative blood allele, a recessive gene that causes people who are homozygous (who inherited a copy from each parent) to lack a particular protein in the blood.  This causes no health effects for the person; but if a Rh-negative woman conceives an Rh-positive child, there's a good chance of Rh incompatibility syndrome, where the mother's immune system recognizes the blood protein in the child to be foreign, and proceeds to destroy the baby's blood cells.  And this is only possible if the father is Rh-positive -- meaning (probably) non-Basque.

So unlike just about every other prohibition against marrying outside of your culture, this one does have a basis in reality.

But the majority of superstitions admit of no easy explanation other than accident and confirmation bias.  And you'd think all it would take is one or two counterexamples -- people who slept soundly in a closed room with a fan running and woke up perfectly healthy, for example -- to make people say, "Oh.  I guess that's not true, then.  What goobers we are."

For some reason, though, that doesn't seem to happen, and I'm at a loss to explain why.

In any case, these beliefs are interesting from an anthropological standpoint, even if they're a bit maddening to the skeptics of the world.  There are about a million others I didn't mention (further supporting the Senegalese maxim that "there are forty different kinds of lunacy, but only one kind of common sense).  If you know any especially funny, weird, or cool ones, leave a note in the comments.  But now, I need to go fix myself some breakfast.  I hope the coffee maker and the microwave aren't in cahoots again.  They don't like me, for some reason.