Yesterday I ran into two unrelated studies that are kind of interesting in juxtaposition.

The first was in the journal Heritage Science, and was authored by a team led by Kaare Lund Rasmussen of the University of Southern Denmark.  It describes analysis of bones taken from 17th century Franciscan friaries in Italy and Denmark, looking specifically at trace element levels as an indicator of wealth, diet, medical treatments, and pollutants.

The similarities were as fascinating as the differences.  In both places, bones from tombs of wealthy patrons were lower in strontium and barium than were bones from the cloisters, where the rank-and-file monks were buried.  This was likely due to the better (and more meat-rich) diet of nobles; ordinary folks ate a great deal more in the way of cereals and grains, which tend to have higher amounts of those trace elements.

On the other hand, the Italian bones had over twenty times the amount of copper that the Danish bones, regardless of social standing.  This was almost certainly because of cookware traditions; there was a long history of Italians of all classes using copper cook pots and storage vessels, whereas the Danes rarely did.

Lead followed the opposite pattern from strontium and barium; the wealthier people had higher amounts of lead in their bones, regardless of where they were from.  Rich people had pewter vessels and serving ware, earthenware coated with lead-based glazes, and (in some cases) lead water intake pipes for indoor plumbing and lead sheets on the roofs of their houses.  Plus -- something that I'd never heard of -- fine wine sometimes had added lead salts, put in to stop it from spoiling.

It worked, apparently, with the downside that if you drank it, you got lead poisoning.

I guess you can't have everything.

Mercury was an interesting one.  Mercury-based "medicine" was used to treat leprosy and syphilis in the Middle Ages.  Like the lead/wine-spoilage thing, the medicine worked only in the sense that you died, after which you no longer had leprosy or syphilis.  What the researchers found was that in Italian bones, the greater the socioeconomic status, the higher the likelihood of having mercury in the bone tissue; not, apparently, that the lower classes didn't get syphilis or leprosy, but that they had less access to treatment when they did.  Danish bones, however, showed no such trend.  The availability of medical treatment for the Danes was much more even-handed -- although, as I pointed out, that was not necessarily a good thing.

It's fascinating that we can analyze four-hundred-year-old bones and make some shrewd guesses about the cultural and social context their former owners lived in.  What they had to contend with -- good and bad -- left a clear record in their graves, still discernible four centuries later.

Then there's the second study, which appeared this week in the journal Environmental Hazards.  Entitled "Gulf Coast Parents Speak: Children's Health in the Aftermath of the Deepwater Horizon Oil Spill," by Jaishree Beedasy, Elisaveta Petkova, and Jonathan Sury (of Columbia University), and Stephanie Lackner (of the University of Madrid), the paper describes a study of 720 families in the part of coastal Louisiana hit by the spill, looking particularly at children's health as a function of proximity.  Turns out 60% of parents reported their children having health and/or psychological/emotional problems following exposure, and those who had come into direct physical contact with the spilled oil showed a 4.5 times higher rate of problems than those who had not. 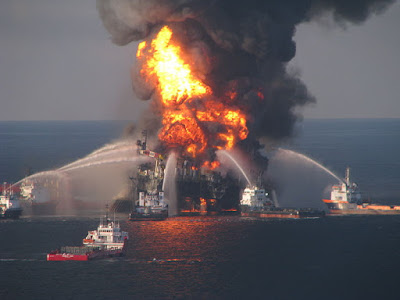 As the press release about the study in Science Daily put it:


Although natural disasters don't discriminate, they do disproportionately harm vulnerable populations, such as people of color and people with lower incomes.  Children are another vulnerable group, because their coping and cognitive capacities are still developing, and because they depend on caregivers for their medical, social, and educational needs.  A growing body of evidence demonstrates that disasters are associated with severe and long-lasting health impacts for children.

Having just read the story about the Danish and Italian bones, what it immediately got me thinking was, what will future archaeologists say about us when they unearth and analyze our bones?  Will they be able to detect traces of our self-poisoning reliance on fossil fuels?  Will the years from 2016 to 2020 show an uptick in pollutants because of Donald Trump's systematic weakening of environmental protections in favor of zero restrictions on industry and corporate interests?

What will that say to them about our priorities as a society?

Sorry to end on an elegiac note, but since we started with bones buried in cloisters, I suppose it's natural enough.  People eventually wised up to the point that they stopped using lead water intake pipes and cookware, and stopped treating diseases with mercury salts.  They did that, by the way, because of science -- the patient study of cause-and-effect that linked lead and mercury to chronic poisoning.  Let's hope that humanity today starts listening to the scientists today who are warning us about climate change and the health effects of pollution.

Otherwise our distant descendants will make the same judgments of our intelligence as we do of the medievals who put lead compounds in their bottles of wine.