I've always thought it would be amazingly cool to witness a supernova.

Imagine it.  Within a few hours, a dim, ordinary-looking star increases in luminosity until it outshines every other astronomical object in the sky except the Sun and Moon.  It's visible during the day and you can read by its light at night.  It's not a blink-and-you'll-miss-it phenomenon, either; the light from the massive explosion peaks rapidly but declines slowly.  Most supernovae will be visible for months, before dimming to near-invisibility, ending as neutron stars or black holes.

There are lots of candidates for what could be the next supernova, although don't get your hopes up; most of these fall into the "some time in the next million years" category.  Yeah, it could happen tomorrow, but I wouldn't put money on it.  Still, the list is sizable, and here are five of the best possibilities:

The consensus amongst astronomers, however, is that the next likely supernova probably isn't on the list -- that it will be a previously-unknown white dwarf or an unremarkable-looking red giant.  We know so little about supernovas that it's impossible to predict them with any kind of accuracy.  And while this is an exciting prospect, we'd better hope that the next supernova isn't too close. 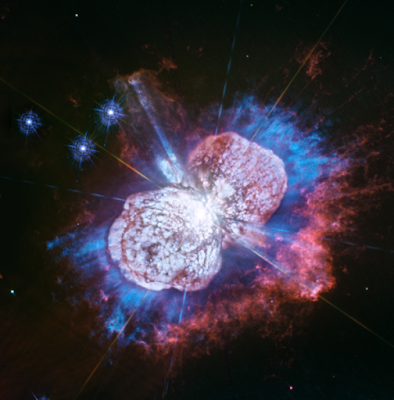 The Homunculus Nebula with Eta Carinae at the center [Image licensed under the Creative Commons ESA/Hubble, Cosmic Fireworks in Ultraviolet Eta Carinae Nebula, CC BY 4.0]

Not only do supernovas produce a lot of light, they generate a tremendous amount of radiation of other kinds, including cosmic rays.  A close supernova could produce enough cosmic rays to wipe out the ozone layer -- leading to a huge influx of ultraviolet light from the Sun, with devastating effects.

Scarily, this may have already happened in Earth's history.  One of the lesser-known mass extinctions occurred at the end of the Devonian Period, 359 million years ago.  Because it is poorly understood, and was dwarfed by the cataclysmic Permian-Triassic Extinction a little over a hundred million years later, it's not one you tend to read about in the paleontology-for-the-layperson books.  Even so, it was pretty significant, wiping out 19% of known families and 50% of known genera, including placoderms (armored fish), cystoids (a relative of the starfish), and graptolites (colonial animals not closely related to any living species).  Most striking were the collapse of reef-forming corals -- reefs didn't begin to form again on any significant scale until the Mesozoic Era, almost two hundred million years later -- and the near-complete wipeout of vertebrates.  The latter left no vertebrate species over a meter long (most of them were under ten centimeters), and again, it was millions of years before any kind of recovery took place.

Fortunately for us, it eventually did, because we're talking about our ancestors, here.

The cause of this catastrophe has been a matter of speculation, but a team led by Brian Fields, astrophysicist at the University of Illinois, may have found a smoking gun.  In a paper this week in Proceedings of the National Academy of Sciences, we find out that the most likely cause for the End-Devonian Extinction is a nearby supernova that caused the collapse of the ozone layer, leading to the Earth's surface being scorched by ultraviolet light.  This triggered a massive die-off of plants -- which had only recently colonized the land -- and worldwide anoxia.

The result?  A mass extinction that hit just about every taxon known.

The idea that a supernova might have been to blame for the End-Devonian Extinction came from the presence of hundreds of thousands of plant spores in sedimentary rock layers that showed evidence of what appeared to be radiation damage.  This isn't conclusive, of course; the Fields et al. team is up front that this is only a working hypothesis.  What they'll be looking for next is isotopes of elements in those same rock layers that are only produced by bombardment with radiation, such as plutonium-244 and samarium-146.  "When you see green bananas in Illinois, you know they are fresh, and you know they did not grow here," Fields said, in an interview in Science Daily.  "Like bananas, Pu-244 and Sm-146 decay over time.  So if we find these radioisotopes on Earth today, we know they are fresh and not from here -- the green bananas of the isotope world -- and thus the smoking guns of a nearby supernova."

So as much as I'd love to witness a supernova in my lifetime, it'd be nice if it was one well outside of the terrifyingly-named "kill zone" (thought to be about 25 light years or so).  And chances are, there's nothing inside that radius we need to worry about.  If any of the known supernova candidates explode, we'll almost certainly be able to enjoy the fireworks from a safe distance.