The lure of nature

I didn't have an easy childhood.  There were a lot of reasons for this, some stemming from my own issues and some completely outside my control.  But one happy constant in my life, and the high point of every year, was that in the summer my dad and I would go on a three-week car trip to Arizona and New Mexico.

The reason for this was that my dad was an avid rockhound.  Not only did he simply like rocks, he was a talented lapidary -- he had the diamond-edged saws and grinding wheels and all the other equipment to turn agates and jaspers and turquoise into beautiful jewelry.  Our summer expeditions resulted in the car coming back weighing twice as much as it did going out, because the trunk was full of boxes of fist-sized chunks of brightly-colored rocks we'd found while hiking in the canyons.

I loved these trips.  My dad was an interesting guy but not very talkative -- a trait I definitely inherited myself -- so it left me lots of space to wander my own interior world while messing about outdoors.  I liked rocks myself, but my favorite things about the desert were the blue skies and clear air, the stark, pristine beauty of the cliffs and mesas, the weird and wonderful cacti, and -- most of all -- the absolute silence.  Where I grew up, in southern Louisiana, was at the time a quiet, not-quite-suburban neighborhood not on the direct path to anywhere, but even so I was never far away from traffic noise.  In the canyons of southeastern Arizona, however, there was literally no sound but the sighing of the wind, and sometimes the distant call of a hawk.  The rumble of a distant thunderstorm or the howling of a coyote at night sounded otherworldly.  It was a strange, beautiful, harsh, magical place, and I swore as a child one day I'd live in Arizona permanently.  It never happened, but over the years I've been back several times to visit some of my favorite childhood haunts, and the southwestern desert still has an attraction for me that borders on the spiritual. 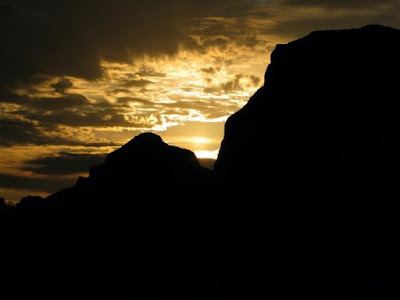 The reason this comes up is a study that appeared this week in The Journal of Environmental Education called, "How Combinations of Recreational Activities Predict Connection to Nature Among Youth," by Rachel Szczytko (Pisces Foundation), Kathryn Tate Stevenson and Markus Nils Peterson (North Carolina State University), and Howard Bondell (University of Melbourne).  The team of researchers looked into what activities were most likely to lead to kids feeling a lifelong connection to the outdoors, and they found that social activities -- family camping trips, Girl or Boy Scouts, programs like 4-H and Primitive Pursuits -- were good, but far better were activities outdoors that were solitary.  Give a kid time to explore outside on his/her own -- whether in the context of an activity like hunting or fishing, or just for the hell of it -- and (s)he's likely to form a permanent bond to nature.

"We saw that there were different combinations of specific activities that could build a strong connection to nature; but a key starting point was being outside, in a more solitary activity," said study co-author Kathryn Tate Stevenson, in a press release from North Carolina State University.  "Maybe we need more programming to allow children to be more contemplative in nature, or opportunities to establish a personal connection.  That could be silent sits, or it could be activities where children are looking or observing on their own.  It could mean sending kids to the outdoors to make observations on their own.  It doesn’t mean kids should be unsupervised, but adults could consider stepping back and letting kids explore on their own."

My dad certainly did that.  I got good instruction on safety -- always carry water and food, wear sturdy hiking boots, don't stint on the suntan lotion (a rule that had to be reinforced daily, given that as a kid I was kind of the half-naked savage type), stay on established trails, and so on.  I already had a healthy respect for wildlife, having grown up in a place that had water moccasins and copperheads galore, so I kept a good lookout for rattlesnakes and scorpions and the like.  As a result, I never got lost or injured, and spent many a happy hour exploring the desert, fostering a love for the outdoors that I still enjoy.

And we need more people growing up with a love of the natural world, given how much our current activities are imperiling it.  "There are all kinds of benefits from building connections to nature and spending time outside," Stevenson said.  "One of the benefits we’re highlighting is that children who have a strong connection to nature are more likely to want to take care of the environment in the future."

It certainly did that for me.  I never got to live in the desert, as I wanted as a child, but instead made my home in one of the most beautiful places on Earth -- the lake country of upstate New York, where I have 3.5 acres of woods and fields, a nice pond (suitable for skinnydipping), and if that's not enough, I'm five miles from a National Forest with miles of trails for running, hiking, and cross-country skiing.

Which is, to me, a recipe for bliss.