2020 has become some kind of nihilist joke.  How many versions of the "2020 Apocalypse Bingo Card" have you heard?  And it does seem like things are just piling on.  Right now, we have a major category-3 hurricane bearing down on southern Louisiana -- that just got hit by a totally different tropical storm three days ago.  We're in the middle of a pandemic that is showing no signs of letting up.  There are record-setting wildfires in California.  The economy is giving serious signs of tanking in a big way.  Protests against police brutality seem to erupt every other day.  Last, we're in the middle of the Republican National Convention, where the platform seems to be, "Look how fucked up everything has gotten in the last four years!  Give us another four and we'll do the same thing again but even bigger this time!"

In a situation like this, I'm always reluctant to add to the doom and gloom.  But I would be remiss in not pointing out that all of the above is small potatoes, really.  A lot of us, in fact, are concerned at how the current chaos has distracted us from a far, far bigger problem.  We are facing an unprecedented climate catastrophe, not in a hundred years, not in fifty years, but right now. and three papers in the past two weeks have added to what was already a clarion call to action.

Let's start with the deep oceans.  The abyssal region of the Earth's oceans is supposed to be one of the most stable ecosystems on Earth.  Saline, completely pitch dark, crushing pressures, and always at just shy of four degrees Celsius -- the temperature at which water is its densest.  No change, no matter what's happening up above.

But last week a paper in Nature Climate Change looked into the deeps of the ocean, and found something terrifying.  The anthropogenic climate change signature is showing up in a place that is supposed to be about as insulated from human effects as you could imagine.

A team led by oceanographer Yona Silvy of the Université Sorbonne wrote the following:


[U]sing 11 climate models, we define when anthropogenic temperature and salinity changes are expected to emerge from natural variability in the ocean interior along density surfaces.  The models predict that in 2020, 20–55% of the Atlantic, Pacific and Indian basins have an emergent anthropogenic signal; reaching 40–65% in 2050 and 55–80% in 2080.  The well-ventilated Southern Ocean water masses emerge very rapidly, as early as the 1980–1990s, while the Northern Hemisphere water masses emerge in the 2010–2030s.  Our results highlight the importance of maintaining and augmenting an ocean observing system capable of detecting and monitoring persistent anthropogenic changes.

Perhaps this should have been unsurprising, considering that 93% of the anthropogenic heating the Earth is experiencing is being absorbed by bodies of water.  But the idea that this absorption isn't limited to the surface -- that we're actually impacting the deepest parts of the world's oceans -- is seriously scary to anyone who knows anything about the environment and climate models.

Scientists have long been concerned about the tipping point -- the point that climatic catastrophe becomes inevitable no matter what we do.  A second study out of Ohio State University has shown conclusively that we've passed that point with respect to one of the Earth's systems, the melting of the Greenland Ice Sheet.

What the researchers found was that up until about the year 2000, the glaciers in Greenland were pretty well in balance.  The amount of ice loss during the summer was nearly equal to the amount of ice gain from snowfall during the winter.  But around 2000, the situation changed, and since then Greenland has lost a staggering 50 gigatons (50 billion tons) more ice than it gained.

"Glacier retreat has knocked the dynamics of the whole ice sheet into a constant state of loss," said Ian Howat, who co-authored the paper.  "Even if the climate were to stay the same or even get a little colder, the ice sheet would still be losing mass." 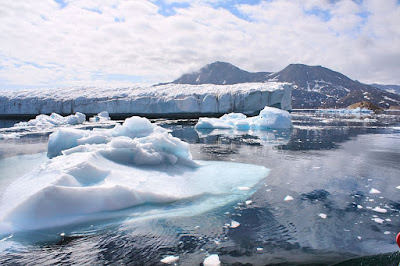 [Image licensed under the Creative Commons Christine Zenino from Chicago, US, Greenland Glaciers outside of Ammassalik (5562580093), CC BY 2.0]

The polar bears aren't the only ones who should be concerned.  Greenland is second only to Antarctica in its potential effect on sea level rise.  If the Greenland Ice Sheet melts -- which is has sometimes done during warm periods in Earth's climate -- it would raise the sea levels by six meters.  Everywhere under six meters of elevation would be under water.

So wave goodbye at New Orleans, Antwerp, Charleston, Boston, a good chunk of New York City and Long Island, and most of Florida, Delaware, the Netherlands, and Bangladesh.

If that's not bad enough, a paper in The Cryosphere last week, authored by a team from three universities -- Leeds, Edinburgh, and University College London -- considered the situation worldwide, and found that in the past twenty-three years, the Earth lost 28 trillion tons of ice.

"To put that in context, every centimeter of sea-level rise means about a million people will be displaced from their low-lying homelands," said Andy Shepherd, director of Leeds University's Centre for Polar Observation and Modelling, in an interview with The Guardian.  "In the past researchers have studied individual areas – such as the Antarctic or Greenland – where ice is melting.  But this is the first time anyone has looked at all the ice that is disappearing from the entire planet...  What we have found has stunned us.  There can be little doubt that the vast majority of Earth's ice loss is a direct consequence of climate warming."

It's easy to focus on what's right in front of your face and forget about the big picture.  This would be okay if the big picture wasn't so deeply horrifying.  I hate to be another purveyor of pessimism, but we have got to start taking this seriously.  I'm as upset about the pandemic and the global political chaos as the next guy, but this isn't a time to be distracted away from a much bigger issue -- the long-term habitability of the planet.

Let's keep our eyes on the ball, here.