As a writer of fiction, I have wondered for years where creative ideas come from.  Certainly a great many of the plots I've written have seemed to spring fully-wrought from my brain (although as any writer will tell you, generating an idea is one thing, and seeing it to fruition quite another).

What has always struck me as odd about all of this is how... unconscious it all feels.  Oh, there's a good bit of front-of-the-brain cognition that goes into it -- background knowledge, visualization of setting, and sequencing, not to mention the good old-fashioned ability to construct solid prose.  But at its base, there's always seemed to me something mysterious about creativity, something ineffable and (dare I say it?) spiritual.  It is no surprise, even to me, that many have ascribed the source of creativity to divine inspiration or, at least, to a collective unconscious.

Take, for example, the origin of the novel I just completed two weeks ago (well, the first draft, anyhow).  Descent into Ulthoa is a dark, Lovecraftian piece about a haunted forest and a man obsessed with finding out what happened to his identical twin brother, who vanished ten years earlier on a hiking trip, but the inspiration for it seemed to come out of nowhere.  In fact, at the time, I wasn't even thinking about writing at all -- but was suddenly hit by a vivid, powerful image that seemed to beg for a story.  (If you want to read more about my experience of having that idea wallop me over the head, I did a post about it over at my fiction blog last August.)

So something is going on neurologically when stuff like this happens, but what?  Martin Lotze, a neuroscientist at the University of Griefswald (Germany), has taken the first steps toward understanding what is happening in the brains of creative writers -- and the results that he and his team have uncovered are fascinating.

One of the difficulties in studying the creative process is that during any exercise of creativity, the individual generally has to be free to move around.  Writing, especially, would be hard to do in a fMRI machine, where your head has to be perfectly still, and your typical writing device, a laptop, would be first wiped clean and then flung across the room by the electromagnets.  But Lotze and his team rigged up a setup wherein subjects could lie flat, with their heads encased in the fMRI tube, and have their arms supported so that they could write with the tried-and-true paper-and-pencil method, using a set of mirrors to see what they were doing. 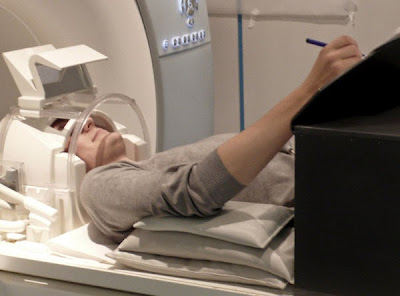 [Image courtesy of Martin Lotze and the University of Griefswald]

Each subject was given a minute to brainstorm, and then two minutes to write.  While all of the subjects activated their visual centers and hippocampus (a part of the brain involved in memory and spatial navigation) during the process, there was a striking difference between veteran and novice writers.  Novice writers tended to activate their visual centers first; brainstorming, for them, started with thinking of images.  Veteran writers, on the other hand, started with their speech production centers.

"I think both groups are using different strategies,” Lotze said.  "It’s possible that the novices are watching their stories like a film inside their heads, while the writers are narrating it with an inner voice."

The other contrast between veterans and novices was in the level of activity of the caudate nucleus, a part of the brain involved in the coordination of activities as we become more skilled.  The higher the level of activity in the caudate nucleus, the more fluent we have become at it, and the less conscious effort it takes -- leading to the conclusion (no surprise to anyone who is a serious writer) that writing, just like anything, becomes better and easier the more you do it.  Becoming an excellent writer, like becoming a concert pianist or a star athlete, requires practice.

All of this is also interesting from the standpoint of artificial intelligence -- because if you don't buy the Divine Inspiration or Collective Unconscious Models, or something like them (which I don't), then any kind of creative activity is simply the result of patterns of neural firings -- and therefore theoretically should be able to be emulated by a computer.  I say "theoretically," because our current knowledge of AI is in its most rudimentary stages.  (As a friend of mine put it, "True AI is ten years in the future, and always will be.")  But just knowing what is happening in the brains of writers is the first step toward both understanding it, and perhaps generating a machine that is capable of true creativity.

All of that, of course is far in the future (maybe even more than ten years), and Lotze himself is well aware that this is hardly the end of the story.  As for me, I find the whole thing fascinating, and a little humbling -- that something so sophisticated is going on in my skull when I think up a scene in a story.  It brings to mind something one of my neurology students once said, after a lecture on the workings of the brain: "My brain is so much smarter than me, I don't know how I manage to think at all!"

Posted by Gordon Bonnet at 6:38 AM