Tuning in and tuning out

Mexican free-tailed bats (Tadarida brasiliensis) are remarkable animals.  They live in staggeringly huge colonies.  The largest known, in Bracken Cave in Comal County north of San Antonio, Texas, has twenty million bats.  I got to see a smaller (but still impressive) colony, in Carlsbad Caverns National Park, New Mexico, when I was a kid, and I'll never forget the sight of the thousands and thousands of bats streaming out of the cave mouth at dusk.

Free-tailed bats echolocate, which you probably already knew; they navigate in the dark by vocalizing and then listening for the echoes, creating a "sonic landscape" of their surroundings accurate enough to snag an insect out of the air in pitch darkness.  But this engenders two problems, which I honestly never though of until they were brought up by the professor of my Vertebrate Zoology course when I was in graduate school:
The answer to the first was discovered by some research at the University of Tübingen back in 2009.  Using recordings, scientists found that bats are sensitive not only to the echoes themselves, but can pick out from those echoes enough information about the sonic waveform that they can recognize their own voices.  Each bat's voice has a distinct, if not unique, sonic "fingerprint" -- much like human voices.

The answer to the second is, if anything, even more astonishing.  Just as humans do, bats have three tiny sound-conducting bones in their middle ear -- the malleus, incus, and stapes (commonly known as the hammer, anvil, and stirrup) -- that transmit sound from the eardrum into the cochlea (the organ of hearing).  Bats have a tiny muscle attached to the malleus, and when they open their mouths to vocalize, the muscle contracts, pulling the malleus away from the incus.  Result: dramatically decreased sound transmission.  But even more amazing, as soon as they stop vocalizing, the muscle relaxes -- fast enough to bring the malleus back in contact with the incus in time to pick up the echo.

Bats, it turns out, aren't the only animals to experience these sorts of problems.  The reason this whole topic comes up is because of some research that was published last week in The Journal of Neuroscience.  In a paper called "Signal Diversification is Associated with Corollary Discharge Evolution in Weakly Electric Fish," by Matasaburo Fukutomi and Bruce Carlson of Washington University, we learn about a group of fish called mormyrids (elephant fish) that have, in effect, the opposite problem from bats; they have to find a way to tune out their own communication so they can sense that of their neighbors. 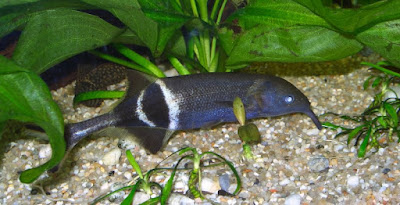 Here, though, they have to be able to ignore the voltage shifts in the water around them given off by their own bodies.  It's as if you were in a conversation with a friend, and instead of doing what most civilized friends do -- taking turns talking -- you both babble continuously, and your brain simply stops paying attention to your own voice.

They do this using a corollary discharge, an inhibitory signal that blocks the higher parts of the brain from responding to the signal.  The researchers found that corollary discharges only occurred in response to voltage changes from the individual itself, and not to those from other individuals.

In other words, just like the bats, mormyrid fish can recognize their own communications.  "Despite the complexity of sensory and motor systems working together to deal with the problem of separating self-generated from external signals, it seems like the principle is very simple," said study co-author Bruce Carlson, in an interview with Science Daily.  "The systems talk to each other.  Somehow, they adjust to even widespread, dramatic changes in signals over short periods of evolutionary time."

So there you have it.  Another natural phenomenon to be impressed by.  It reminds me of the wonderful TED talk by David Eagleman called, "Can We Develop New Senses for Humans?" that talks about an animal's umwelt -- in essence, how it perceives the world.  What must the world seem like to a fish that gathers most of its information from electrical signals?

Staggers the imagination, doesn't it?