For me, one of the coolest things about science is that even once you think you've got something pretty well figured out, you can always find new interesting pieces of the puzzle.

For example, take dinosaurs, which we've known a good bit about for a long while, starting with Mary Anning's discoveries along the "Jurassic Coast" of Dorset, England in the early nineteenth century.  Even the kids' books when I was growing up back in the 1960s and 1970s had a lot of pretty decent information.  Although some of the reconstructions of skeletons, and (especially) our knowledge of the soft tissue that covered it, has changed since that time, it wasn't like I had to completely relearn the science when I studied it more seriously.

That said, we're still learning new stuff and adding to the picture.  Just this week we had two new papers that have sharpened the focus on our understanding of dinosaur evolution -- the first about the mid-Jurassic peak in dinosaur diversity and size, and the second about the event that wiped the entire lineage out, with the exception of the ones we now call birds.

The first paper is from Proceedings of the Royal Society B, and is titled "Extinction of Herbivorous Dinosaurs Linked to Early Jurassic Global Warming Event."  The paper was written by a team led by Diego Pol, paleontologist at the Paleontological Museum Egidio Feruglio in Trelew, Argentina, and looked at a hitherto-unexplained overturning of Jurassic fauna that made way for the rise of the sauropods -- the largest land animals that have ever lived. 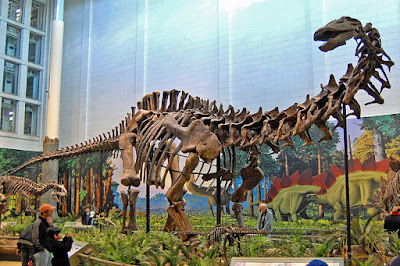 The early Jurassic had a high dinosaur diversity, but then toward the middle of the period something happened, and a good many of the early Jurassic dinosaurs vanished.  They were replaced by behemoths like the familiar Brachiosaurus and the less-well-known but hilariously-named Supersaurus, which measured an almost unimaginable 33 meters from tip to tail.  (Even better, though, is the name Dreadnoughtus, which was shorter than Supersaurus -- "only" 26 or so meters long -- but is thought to be the heaviest land animal ever, on the order of thirty metric tonnes.)

So what caused the replacement of the earlier species by the giants?  Pol and his team found what they think is the smoking gun, a series of massive volcanic eruptions in southern Gondwanaland (what is now South America and Africa), which spiked the carbon dioxide content of the air, boosting the average temperature and dropping the pH of ocean water.

The perturbation of the climate affected the plants first.  Earlier groups, like seed ferns and other smaller herbaceous plants, were replaced by conifers, which have tough, lignified stems, small needles or scales instead of leaves, and thick waxy cuticles to prevent water loss.  The problem is -- if you're an early Jurassic herbivorous dinosaur -- having evolved to eat seed ferns, you're not going to do so well trying to munch pine needles.

So as it always does, the change to the base of the food web percolated its way up to the top.  The early dinosaurs were replaced by big sauropods, who had grinding teeth (so tough plant material could be thoroughly pulverized before swallowing) and large stomachs (where food could sit and digest for a long time, extracting all the nutritive value possible).  The result was the arrival on the scene of monsters like Supersaurus and Dreadnoughtus and their cousins, which were the dominant land herbivores for a good hundred million years thereafter.

Sometimes new evidence results in our having to revise our previous models, overturning what we thought we knew.  Take, for example, the research that appeared this week in Royal Society Open Science that conclusively put to rest a commonly-held idea -- that by the time the Chicxulub Meteorite hit the Earth 66 million years ago, dinosaurs were already in a steep decline, so they would have disappeared anyhow, even without the massive impact that was the final death blow.

In "Dinosaur Diversification Rates Were Not in Decline Prior to the K-Pg Boundary," by a team led by Joseph Bonsor of the London Natural History Museum and the University of Bath, we find out that the dinosaurs were actually doing okay before the meteorite hit.  Far from being in decline, they would have been very likely to retain their position as the dominant animals on Earth well into the Cenozoic Era -- with effects on mammalian evolution that can only be imagined.

Bonsor, as befits a good scientist, is cautious about overconcluding.  "The main point of what we are saying is that we don't really have enough data to know either way what would have happened to the dinosaurs," Bonsor said in a press release from the Natural History Museum.  "Generally in the fossil record there is a bias towards a lack of data, and to interpret those gaps in the fossil record as an artificial decline in diversification rates isn't what we should be doing.  Instead we've shown that there is no strong evidence for them dying out, and that the only way to know for sure is to fill in the gaps in the fossil record."

But in the absence of positive evidence for a decline, we're thrown back to the null hypothesis; that they weren't in imminent danger of extinction.  So the whole idea of the dinosaurs as some kind of "failed experiment" in evolution is clearly wrong.  Not only did they kind of run things for a good two hundred million years -- which, by comparison, is something like a thousand times longer than we've been around -- they would probably have persisted for a good long while had a giant rock not interfered.

Me, I always want to know "what if?"  I think it comes from being a novelist; I'm always wanting to play around with reality and see what happens.  If the dinosaurs had stuck around for a long time rather than dying out 66 million years ago, it's hard to see how the rise of mammals -- and ultimately, us -- would have occurred.  Mammals had been around for a long while before the Chicxulub Impact, but they were mostly small, presumably kept that way both by the big carnivores and by competition with herbivores much larger than themselves.  So what would the Earth look like today?

Super-intelligent dinosaurs?  Maybe.  Evolution doesn't always point in the direction of "bigger and smarter;" it's the law of whatever works.  So as fun as it is to speculate, to be fair we have to side with Bonsor and say we just don't know.

Anyhow, that's our look back into the distant past for today.  Cool that we're still assembling new views of an old branch of biology.  Further reinforcing my opinion that if you're interested in science, you will never ever be bored.