Today's topic comes to us from the One Thing Leads To Another department.

I got launched into this particular rabbit hole by a notice from 23 & Me that they'd refined their analysis of their test subjects' DNA, and now had a bigger database to extract from, allowing them to make a better guess at "percent composition" not only by general region, but by specific sub-region.

So I took a look at my results.  My DNA came out 63.5% French, 25.3% Scottish and English, 6.4% Ashkenazi, and the remaining 4.8% a miscellany.  This works out to be pretty much what I'd expect from what I know of my family tree.  My mom was close to 100% French, but a great-grandfather of hers, one Solomon Meyer-Lévy, was a French Jew from Alsace and is the origin of the Ashkenazic DNA.  My dad was a bit of a hodgepodge in which French, Scottish, and English predominate.

So like I said, no surprises.  I'm a white guy of western European descent, which if you look at my profile photo, is probably not going to come as any sort of shock.

What I thought was more interesting was the regional breakdown.  The Scottish and English bits were especially interesting because I don't have good records of where exactly my British Isles forebears were from.  Apparently I have a cluster of genetic relatives around Glasgow, the London area, and Yorkshire.  Other than my dad's paternal family (which was from the French Alps, near Mont Blanc and the border of Italy) and my Alsatian great-great-grandfather, my French ancestry is all in western France; this lines up with what I know of my mom's family, which came from Bordeaux, Poitou, the Loire Valley, and Brittany.

So all of this shores up their claims to accuracy, because this was ascertained purely by my DNA -- I didn't send them my family tree, or anything.  But then this got combined with another random thing, which is that I've been reading a book called The Ancient Celts by anthropologist Barry Cunliffe, and I was kind of surprised at how much of Europe the Celts once ruled -- not only the British Isles and all of France (then called Gaul), but what is now Switzerland, southern Germany, Austria, the northern half of Italy, the eastern half of Spain, and down into a big chunk of the Balkans.  They seem to have been nothing if not inveterate wanderers, and their walkabouts took them just about everywhere in Europe but Scandinavia.  They were there for a long while, too; it was only when the Romans got their act together and started to push back that the Celts retreated; they were shoved farther west when first the Germanic tribes, and then the Slavs, moved in from the east and kind of kept moving. 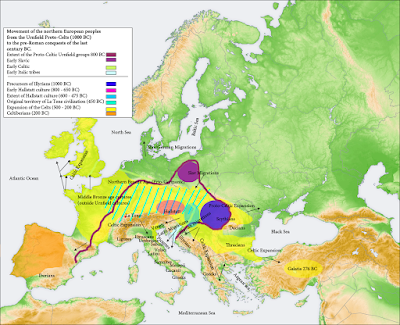 This all got me thinking, "Okay, when I say my ancestry is on the order of 2/3 French, what exactly am I saying?"  So I started doing some research into "the ethnic origin of the French," and I found out that it's not simple.  The western parts of France (whence my mom's family originated) are mostly of Celtic (Gaulish) ancestry.  People in the southeast, especially the lowlands near Marseilles, have a lot of Roman and Etruscan forebears.  When you get over into Languedoc -- the southwestern part of France, near the border of Spain -- there's an admixture not only from the Moors of North Africa, but from the Basques, who seem to be the remnants of the earliest settlers of Europe, and are the only ones in western Europe who don't speak an Indo-European language.  In Normandy there's a good admixture of Scandinavian blood, from Vikings who settled there a thousand years ago -- in fact, "Normandy" means "North-man-land."  Despite the fact that the name of the country and its people comes from a Germanic tribe (the Franks), the only place there's a significant amount of Germanic ancestry in France is in the east -- from Burgundy north into Alsace, Lorraine, and Picardy.

Apparently the only reason the French are Frankish is because the Franks ruled the place for a few hundred years, a bit the way the Normans did in England.  The common people, your average seventeenth-century peasants in Bordeaux, probably were nearly 100% Gaulish Celt.

So when I say my mom's family is French, and a guy from Lille and a woman from Marseilles say the same thing, what exactly do we mean?

And there's nothing unusual about the French in that regard; I just use them as an example because I happen to know more about them.  The same is true pretty much anywhere you look except for truly insular cultures like Japan, which have had very little migration in or out for millennia.  We're almost all composites, and ultimately, all cousins.  I remember when I first ran into this idea; that the further back you go, the more our family trees all coalesce, and at some point in the past every human on Earth could be sorted into one of two categories -- people who were the ancestors of every one of us, and people who left no living descendants.

That point, most anthropologists believe, is way more recent than most of us would suspect.  I've heard -- to be fair, I've never seen it rigorously proven, but it sounds about right -- that the two-category split for those of us with western European ancestry happened in around 1,200 C.E.  So pick out anyone from thirteenth century western Europe, and he's either my ancestor, or he has no descendants at all.

This brings up a couple of things.  First, "royal blood" is an idiotic concept from just about whichever angle you choose.  Not only does royal ancestry not confer fitness for leading a country -- let's face it, a lot of those kings were absolute loonies -- I can pretty much guarantee that I descend from Charlemagne, and if you have European ancestry, so do you.  My wife actually descends from an illegitimate child of King Edward IV of England (something she likes to remind me about whenever I get uppity), but the truth is, all of us have royal blood and peasant blood pretty well mixed indiscriminately.

Second, racism, ethnicism, and xenophobia are all equally ridiculous, since (1) we're virtually all genetic mixtures, (2) regardless of our ethnicity, our genetic similarities far outweigh our differences, and (3) we're all cousins anyhow.  I find that rather cool, honestly -- that a Zulu woman living in Botswana and I have common ancestry if you go back far enough.  Race is a cultural construct, not a genetic one, which you can see with extraordinary vividness if you take a DNA test, or if you read anything about the migration patterns humanity has taken since first leaving the East African savanna something like 250,000 years ago.

Anyhow, those are my musings about ethnicity, DNA, ancestry, and so on.  It all goes to show that we're wonderfully complex creatures, and the determination of some of us to see the world as if it was straightforward black-and-white is not only inaccurate, it misses a great deal of the most interesting parts of it.  As the brilliant science fiction writer Ursula LeGuin put it, "I never knew anybody who found life simple.  I think a life or a time looks simple only if you leave out the details."

****************************************
Not long ago I was discussing with a friend of mine the unfortunate tendency of North Americans and Western Europeans to judge everything based upon their own culture -- and to assume everyone else in the world sees things the same way.  (An attitude that, in my opinion, is far worse here in the United States than anywhere else, but since the majority of us here are the descendants of white Europeans, that attitude didn't come out of nowhere.)
What that means is that people like me, who live somewhere WEIRD -- white, educated, industrialized, rich, and democratic -- automatically have blinders on.  And these blinders affect everything, up to and including things like supposedly variable-controlled psychological studies, which are usually conducted by WEIRDs on WEIRDs, and so interpret results as universal when they might well be culturally-dependent.
This is the topic of a wonderful new book by anthropologist Joseph Henrich called The WEIRDest People in the World: How the West Became Psychologically Peculiar and Particularly Prosperous.  It's a fascinating lens into a culture that has become so dominant on the world stage that many people within it staunchly believe it's quantifiably the best one -- and some act as if it's the only one.  It's an eye-opener, and will make you reconsider a lot of your baseline assumptions about what humans are and the ways we see the world -- of which science historian James Burke rightly said, "there are as many different versions of that as there are people."
[Note:  If you purchase this book using the image/link below, part of the proceeds goes to support Skeptophilia!]