The flora of prehistory

I grew up around plants.  Well, everyone does, more or less, but my parents were dedicated gardeners and naturalists.  My dad grew show-quality tea roses and taught me how to recognize the trees of my native Louisiana from the shapes of the leaves and texture of the bark when I was still in elementary school.  My mom's flower gardens more than once had people pulling over to take photographs.

Regular readers of Skeptophilia are well aware of my fascination with prehistoric animals -- like many kids I grew up with books on dinosaurs (and posters of dinosaurs and models of dinosaurs...).  So it shouldn't have been a surprise that I was thrilled when I found out that just like the animals of prehistory, the plants of prehistory were different than the ones we have today.  But I recall that my interest was mixed with shock -- if I went back to the Cretaceous Period, not only would there be T. rexes and triceratopses stomping about, but the plants through which they'd have been stomping wouldn't have been the familiar oaks and ashes and hollies and camellias that were so familiar, but an entirely different flora in which I doubt there'd have been a single species I could have identified.

Well, maybe a couple, if not to species, at least to family.  Some of the earliest flowering plants were magnolias, and from the fossilized flowers, they look pretty much like... magnolias.  Ferns have been around for a long, long time (far predating the dinosaurs, in fact), and conifers like the common pines, cedars, and cypresses I saw every day were plentiful all the way back in the Triassic Period, 240-odd million years ago.

But that's about it.  And although some of the groups were there, the species themselves would have been different ones than what we see around us today.  Imagine it: forests of plants with huge and wonderful biodiversity, in which you wouldn't recognize a single one that's familiar.

The reason I'm thinking about all this floral prehistory is a link to some cool research that showed up last week in Geology that a friend and frequent contributor to Skeptophilia sent me, about a discovery of a phenomenally well-preserved flower in hundred-million-year-old amber from Myanmar. 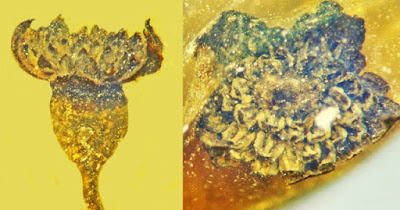 Valviloculus pleristaminis, flower in lateral view.  Image credit: Poinar, Jr. et al., doi: 10.17348/jbrit.v14.i2.1014.
Dubbed Valviloculus pleristaminis (the genus name comes from the Latin valva -- "a folding door" -- and loculus -- "compartment;" the species name means "lots of stamens"), the little flower is only distantly related to any extant species.  Botanists think that Valviloculus might be allied to one of two rather obscure families of plants native to the Southern Hemisphere -- Monamiaceae and Atherospermataceae -- but that's only a preliminary analysis. 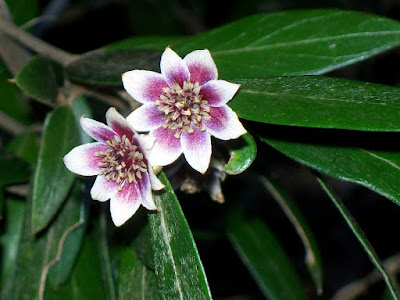 Atherosperma moschatum, an Australian species that may be one of the closest living cousins to Valviloculus [Image is in the Public Domain courtesy of photographer Peter Woodard]
"This isn't quite a Christmas flower but it is a beauty, especially considering it was part of a forest that existed 100 million years ago," said emeritus professor George Poinar, Jr., of Oregon State University, who led the research into the newly-discovered species.  "The male flower is tiny, about two millimeters across, but it has some fifty stamens arranged like a spiral, with anthers pointing toward the sky.  Despite being so small, the detail still remaining is amazing.  Our specimen was probably part of a cluster on the plant that contained many similar flowers, some possibly female."
What's even more mind-blowing is something I've pointed out before; given how difficult it is to form a good fossil and then have it survive intact for millions of years, the species we know about (both animal and plant) probably represent about 1% of what was actually alive back then.  The vast majority of species came and went, leaving no traces.  So if we were to travel back to the mid-Cretaceous, when Valviloculus was living and flowering in the prehistoric forests, not only would we see it, but literally hundreds of other long-gone species as varied, attractive, weird, and fascinating as the ones we have today.
Imagine the colors, shapes, and scents, plants from tiny sprigs all the way to towering trees, and none of which we still have with us now.  Truly, in Darwin's words, evolution produced -- and continues to produce -- "endless forms most beautiful and most wonderful."
******************************************
This week's Skeptophilia book recommendation is apt given our recent focus on all things astronomical: Edward Brooke-Hitching's amazing The Sky Atlas.
This lovely book describes our history of trying to map out the heavens, from the earliest Chinese, Babylonian, and Native American drawings of planetary positions, constellations, and eclipses, to the modern mapping techniques that pinpoint the location of stars far too faint to see with the naked eye -- and objects that can't be seen directly at all, such as intergalactic dust clouds and black holes.  I've always loved maps, and this book combines that with my passion for astronomy into one brilliant volume.
It's also full of gorgeous illustrations showing not only the maps themselves but the astronomers who made them.  If you love looking up at the sky, or love maps, or both -- this one should be on your list for sure.
[Note: if you purchase this book using the image/link below, part of the proceeds goes to support Skeptophilia!]