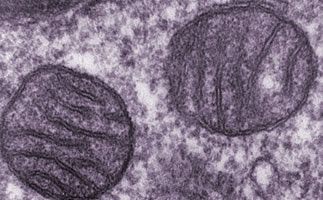 Mitochondria [Image is in the Public Domain courtesy of microscopist/photographer Louisa Howard]
And that's not all.  If you're a plant (I'm assuming you're not, but you never know), you have three separate ancestral lines -- your ordinary plant cells, the mitochondria, and the chloroplasts, which are also little single-celled invaders that now plants can't live without.  But even that's not the most extreme example.  The microorganism Mixotricha paradoxa is a composite being made up of five completely separate ancestral genomes that have fused together into one organism.

But back to humans, if you're not already so skeeved out that you've stopped reading.  Because it's even more complicated than what I've already told you, as you'll learn from geneticists Cedric Feschotte, Edward Chuong and Nels Elde of the University of Utah in a paper in which we find out that even our nuclear DNA isn't entirely human.  10% of our 30,000-odd genes and three-billion-odd base pairs...

We usually think of viruses as little parasites, some of which are killers like COVID-19, rabies, and ebola fever, but also include nuisances like colds, flu, warts and chickenpox.  Turns out, though, that they're more than that.  Some of them -- the retroviruses (HIV being the best-known example) -- are capable of inserting genetic material into the host's DNA, thus altering what the host does.  Certainly, sometimes this is bad; both AIDS and feline leukemia are outcomes of this process.  But now Feschotte, Chuong, and Elde have shown that some of our viral hangers-on have had their genes repurposed to work in our benefit.

These stowaway bits of DNA are called endogenous retroviruses (ERVs), and some of them seem to be associated with cancer.  Others have been implicated in multiple sclerosis and schizophrenia.  But what the researchers found is that not all of them are deleterious; the gene that allows us to digest starch, and (even more importantly) the gene that triggers the fusion of the developing embryo to the placenta, seem to have viral origins.

All of which is pretty amazing.  And it definitely gives one pause when you stop to think of how we define the word "organism."  Am I a single organism?  Well, not really.  Besides my regular human cells, I've got trillions of prokaryotic hangers-on and trillions of mitochondria, each with their separate bacterially-derived genome; and 10% of what I think of as "my DNA" came from viruses, at least some of which has then been modified into genes that I depend on to survive.  So humans -- and all living things -- are looking more and more like composite colonies of symbiotic life forms, representing a web of interrelationships that is so complex that it's mind-boggling.

Remember the Trill from Star Trek:Deep Space Nine?  A lot of us were kind of creeped out to find out that Jadzia Dax's personality and intelligence didn't come from her humanoid brain, but from a weird, crustacean-like symbiotic life form that was wired into her nervous system.  Turns out that once again, Star Trek hit close to the target of the reality we've now uncovered with science -- only the reality is even more bizarre than the fiction.
So step aside, Star Trek aliens.  I'm too busy being blown away by how weird and cool the life here on Earth turns out to be.
*********************************
Back when I taught Environmental Science, I used to spend at least one period addressing something that I saw as a gigantic hole in students' knowledge of their own world: where the common stuff in their lives came from.  Take an everyday object -- like a sink.  What metals are the faucet, handles, and fittings made of?  Where did those metals come from, and how are they refined?  What about the ceramic of the bowl, the pigments in the enamel on the surface, the flexible plastic of the washers?  All of those substances came from somewhere -- and took a long road to get where they ended up.
Along those same lines, there are a lot of questions about those same substances that never occur to us.  Why is the elastic of a rubber band stretchy?  Why is glass transparent?  Why is a polished metal surface reflective, but a polished wooden surface isn't?  Why does the rubber on the soles of your running shoes grip -- but the grip worsens when they're wet, and vanishes entirely when you step on ice?
If you're interested in these and other questions, this week's Skeptophilia book-of-the-week is for you.  In Stuff Matters: Exploring the Marvelous Materials that Shape Our Man-Made World, materials scientist Mark Miodownik takes a close look at the stuff that makes up our everyday lives, and explains why each substance we encounter has the characteristics it has.  So if you've ever wondered why duct tape makes things stick together and WD-40 makes them come apart, you've got to read Miodownik's book.
[Note: if you purchase this book using the image/link below, part of the proceeds goes to support Skeptophilia!]