Peering into the Neanderthal brain

Despite having taught genetics for 32 years, it still is astonishing to me that all of the genetic diversity of the 7.7-odd-billion humans on Earth is accounted for by differences amounting to only a tenth of a percent of the genome.

Put a different way, if you were to find the person who is the most genetically different from you, the two of you would still have a 99.9% overlap in your DNA.  A lot of that additional tenth of a percent is made up of genes for obvious appearance-related features -- eye color and shape, hair color and texture, skin color, body build, and so on.  But even these characteristics, which are usually considered to determine race, don't really tell you all that much.  A San man and his Tswana neighbor in Botswana were both called "black" by the white European colonists, but those same white Europeans were genetically closer to people in Japan than the San and Tswana were to each other.  There is, in fact, more human genetic diversity on the continent of Africa than there is in the entire rest of the world put together -- unsurprising, perhaps, given that our species originated there.

Race, then, is a social construct, not really a biological one.  There are some distinct genetic signatures in different ethnic groups, which is what allows the "percent composition" you get if you have your DNA analyzed by Ancestry or 23 & Me, and within their limitations, they don't have bad accuracy.  My own DNA test lined up almost perfectly with what I know of my family tree; something like two-thirds from western and northwestern France, a good chunk of the rest from Scotland and England, and an interesting (and spot-on) 6% of my DNA from my Ashkenazi Jewish great-great-grandfather.

Even more surprising, perhaps, is that the average difference between the human genome and that of our closest non-human relatives -- chimps and bonobos -- is still only 1.2%.  So all of the lineages that split off from our line of descent after the chimps and bonobos did, on the order of five million years ago, would be closer than that to us genetically.  This has been confirmed by analysis of DNA in those now-extinct groups of hominins -- Neanderthals, Denisovans, and so on.

Here, we're talking about way bigger physical differences than there are between any two races of modern humans you might pick.  Bone structure, brain size and structure, body proportions -- some pretty major stuff.  Still, the Neanderthals, Denisovans, and us are all the same species, by the rather mushy definition of a species as being a group of organisms capable of reproduction that results in fertile offspring; modern humans have a good chunk of Neanderthal and Denisovan DNA, also at least in part detectable by genetic testing. 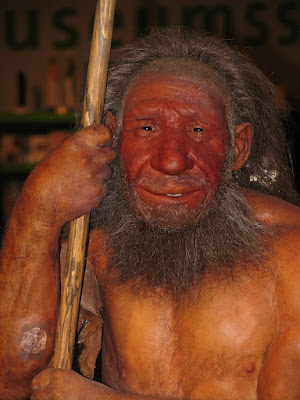 Why all this comes up is a study in Science this week by a huge team led by Alysson Muotri of the University of California - San Diego in which geneticists tinkered with human stem cells, altering their DNA to reflect one of 61 genes that have been identified as differences between ourselves and our Neanderthal and Denisovan kin.  They then allowed those cells to proliferate and form organoids -- mini-brains that can form connections (synapses) just as a developing brain in an embryo would.

Well, my first thought was, "Haven't these people ever watched a science fiction movie?"  Because scientists always try shit like this in movies, and it always ends up with a giant brain-blob that goes rogue, escapes the lab, and proceeds to eat Tokyo.  But Dr. Muotri assures us that that's not possible in this case.  He explains that organoids are incapable of living all that long because they don't have all the support structures that real brains have -- a circulatory system for example -- so they'd never be capable of surviving outside the petri dish.

To which I say: of course, Dr. Muotri.  That's what you would say.  Just realize that in those same science fiction movies, it's always the scientist who says, "Wait, stand back!  Let me try to communicate with it!" and ends up being the first one to get devoured.

So don't say I didn't warn you.

In any case, what is kind of amazing is that these organoid brains with a single gene altered to what our Neanderthal cousins had developed in a way that was completely unlike our own.  As the press release in Science Daily explained it:

All of that, from a single gene.

"This study focused on only one gene that differed between modern humans and our extinct relatives. Next we want to take a look at the other sixty genes, and what happens when each, or a combination of two or more, are altered," Muotri said.  "We're looking forward to this new combination of stem cell biology, neuroscience and paleogenomics.  The ability to apply the comparative approach of modern humans to other extinct hominins, such as Neanderthals and Denisovans, using brain organoids carrying ancestral genetic variants is an entirely new field of study."

So that "less than a percent" label on the differences between ourselves and our nearest non-modern-human kin is a little misleading, because apparently some of that less-than-a-percent are really critical.

In any case, that's our view of the cutting edge of science for today.  One can't help but be impressed with studies like this, which accomplish feats of genetic messing-about that would have been themselves in the realm of science fiction twenty years ago.  I wonder what the next twenty years will bring?  Hopefully not brain blobs eating Tokyo.  I mean, I'm all for scientific advancement, but you have to draw the line somewhere.