Like a lot of couples, my wife and I have a great many inside jokes and turns of phrase that amuse us no end but must puzzle the hell out of everyone else.

Part of the reason, of course, is that we've been together for over twenty years, and during that time shared experience has given us a rich reservoir to draw from.  Sometimes, it's a combination of two or more memories that gives words their relevance, and those are even harder to explain should anyone ask.  For example, I ended a series of texts with my wife a couple of weeks ago, "Thank you, Bloopie," and she started laughing so hard she was afraid her coworkers would come in and demand to know what was so funny, which would have required her to explain that it was a combination of bits from Seinfeld and an obscure British spoof of middle school educational videos called Look Around You, and there was no way the explanation would have elicited anything more than puzzled head tilts and questions about why that was even funny. 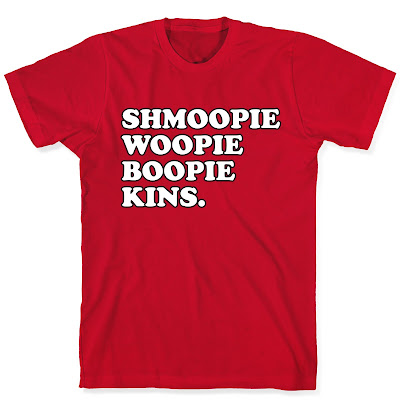 Another example is why we always laugh when we hear Bill Withers's song "Ain't No Sunshine," the lyrics of which are anything but funny.  This one is at least explainable; when we were in Spain about fifteen years ago we rented a room for the night in a B&B, and the guy in the next room spent what seemed like hours practicing the trombone.  Amongst his Greatest Hits was -- I kid you not -- "Ain't No Sunshine."
He seemed to particularly enjoy the "WOMP WOMP WOMP" part at the end of each line.
The whole subject comes up because of a paper a couple of weeks ago in the Journal of Communication, which gave the results of a longitudinal study of communication between couples as they moved deeper -- and subsequently, sometimes out of -- relationships.  Instead of verbal communication, which would have required the participants to recall accurately what they'd said, the researchers used text messages, and found, perhaps unsurprisingly, that as relationships progress, the language of the texts becomes more and more similar.

The research, done by Miriam Brinberg (Pennsylvania State University) and Nilam Ram (Stanford University), looked at three parts of electronic communication: syntactic alignment (sentence structure, use of the different parts of speech, use of punctuation), semantic alignment (word meaning, including similarity of word choice where there's more than one way of expressing the same concept), and overall alignment (including features like the use of shortcuts like "omwh" for "on my way home").  They found that at the beginning of a romantic relationship, all three of them converge fairly quickly, and the process of becoming more similar continues -- albeit at a slower pace -- thereafter.

One interesting potential direction for further research is whether both partners shifted their speech, or if one of them moved more than the other.  "There's some research in this area that looks at power dynamics," study co-author Brinberg said, in an interview with The Academic Times.  "For example, in a job interview, the interviewee might make their language more similar to the interviewer to indicate they are more similar to them, or employees may alter their language to match that of their supervisor.  As with those examples, one might wonder if, in romantic relationship formation, there is one person who is changing their language to match the other."

In my own case, it doesn't seem like one of us altered our language use further than the other; more that we both gradually picked up phrases that then had a shared meaning.  The one exception I can think of is that there's been an unequal trade in words from our respective ethnic backgrounds.  My wife, who is Jewish, has a great many words and phrases from Yiddish that are incredibly expressive, explaining why I now use words like bupkis and verklempt and schvitz and schmutz.  Carol has picked up fewer French words from me, although I know that she's used words like macacries (Cajun French for "knick-knacks") even though there's a perfectly good Yiddish word for the same concept (tchotckies).  Other than that, I think most of the French words she's learned from me have to do with cooking, which I suppose makes sense.

But it's a fascinating phenomenon.  Language is much more than flat denotative meaning; there are wide shades and gradations of connotation that can be extremely subtle, one reason why it's so hard to learn a second (or third or fourth) language fluently.  I still remember my Intro to Linguistics professor explaining the difference between denotation and connotation using the example of "Have a nice day" versus "I hope you manage to enjoy your next twenty-four hours."

If there are cultural nuances that would be difficult to explain to a non-native speaker, consider that within those there are additional personal nuances that might be incomprehensible outside of the small number of people in the in-group who "get it," making the interpretation of informal speech a lot more complex than you might have guessed.

So that's our excursion into the subtleties of linguistics for today.  Now, I gotta go get ready for work, and I need to take a shower and wash off the schvitz and schmutz.  Can't show up looking all verklempt.

************************************
This week's Skeptophilia book recommendation is pure fun: Arik Kershenbaum's The Zoologist's Guide to the Galaxy: What Animals on Earth Reveal About Aliens and Ourselves.  Kershenbaum tackles a question that has fascinated me for quite some time; is evolution constrained?  By which I mean, are the patterns you see in most animals on Earth -- aerobic cellular respiration, bilateral symmetry, a central information processing system/brain, sensory organs sensitive to light, sound, and chemicals, and sexual reproduction -- such strong evolutionary drivers that they are likely to be found in alien organisms?
Kershenbaum, who is a zoologist at the University of Cambridge, looks at how our environment (and the changes thereof over geological history) shaped our physiology, and which of those features would likely appear in species on different alien worlds.  In this fantastically entertaining book, he considers what we know about animals on Earth -- including some extremely odd ones -- and uses that to speculate about what we might find when we finally do make contact (or, at the very least, detect signs of life on an exoplanet using our earthbound telescopes).
It's a wonderfully fun read, and if you're fascinated with the idea that we might not be alone in the universe but still think of aliens as the Star Trek-style humans with body paint, rubber noses, and funny accents, this book is for you.  You'll never look at the night sky the same way again.
[Note: if you purchase this book from the image/link below, part of the proceeds goes to support Skeptophilia!]