I felt the earth move under my feet

Some of you probably recall the highly scientific 1990 nature documentary Tremors, wherein Kevin Bacon has to battle gigantic worms that can tunnel through rock, and which have evolved such sophisticated sensory organs that they can feel your footsteps and follow you until an opportune moment to pop up and eat you for lunch, yet are still stupid enough to die from running into the wall of an aqueduct or launching themselves out of a cliff face in the fashion of Wile E. Coyote being shot from the barrel of an Acme E-Z Cannon. 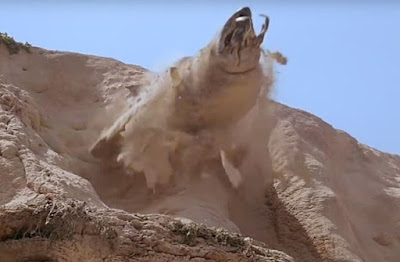 The reason this comes up is because of a piece of research in the journal Geology, which I can confidently assert would have reminded no one else in the entire world of Tremors, but I'm not responsible for how my brain works, and I figure if on some level you didn't enjoy free association, you wouldn't be here.  Anyhow, the paper is titled "Eruption Risks from Covert Silicic Magma Bodies," which as you can tell from the title has zero to do with giant carnivorous worms, but does have to do with the fact that there seem to be dangerous and undetected pockets of magma underground that can be located by their seismic traces.

(See the connection?  See?  The tagline for Tremors is "They say there's nothing new under the sun, but under the ground...".  I rest my case.)

What spurred the four geologists who wrote the paper -- Shane M. Rooyakkers, John Stix, and Kim Berlo (of McGill University), Maurizio Petrelli (of Università degli Studi di Perugia), and Freysteinn Sigmundsson (of the University of Iceland - Reykjavík) -- were three instances of what they euphemistically call "Unintentional encounters with silicic magma at ~2-2.5 km. in depth," which is science-speak for some people at a drill site looking into the hole and then yelling, "FUCKING HELL WE JUST HIT A MAGMA CHAMBER."  The three sites were on Krafla (in Iceland), Menengai (in Kenya), and Kilauea (in Hawaii), and in each case was a shock because the areas had been studied extensively and the magma chambers they hit hadn't previously been detected.

Magma chambers are usually found by their seismic properties; the sound waves from explosions, and the pressure waves from earthquakes, travel at a different speed in solids than they do in liquids, so by comparing how long it took for those waves to arrive at detectors in different locations, you can infer how much of the intervening material is liquid and how much is solid.  (That's a vast oversimplification, but the gist of it, anyhow.)  Given how good this technique is, geologists thought they had all of the near-surface magma chambers pinpointed, so it was a significant shock to find out that there were some out there that we didn't know about.

Another piece of this that raised red flags for me was that word "silicic" in the title.  Magma usually comes in two flavors, mafic and felsic (or silicic).  Mafic magma is high in magnesium and iron, hardens into dark-colored rocks like basalt, and when it's molten it's highly fluid, like the rivers of lava you probably think of when you picture a volcano.  Felsic magma is high in silica and feldspar, hardens into light-colored rocks like granite and rhyolite, and is very viscous and thick when it's molten -- so volcanoes powered by a felsic magma chamber often build up so much pressure beneath that blob of sticky glop that when they erupt, it's explosive.  (Examples are Vesuvius, Mount Saint Helens, and La Soufrière -- currently erupting on the island of Saint Vincent.)

So an undetected near-surface magma chamber filled with felsic/silicic magma is not good news.  People are walking around without realizing it on top of what amounts to a giant superheated bomb. 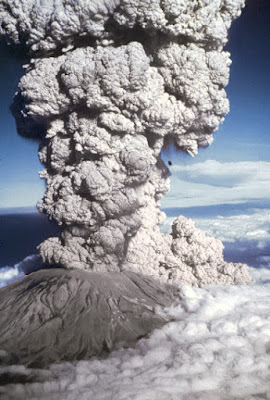 The 1980 eruption of Mount Saint Helens [Image is in the Public Domain courtesy of NASA]
"In traditional approaches to volcano monitoring, a lot of emphasis is placed on knowing where magma is and which magma bodies are active," said study lead author Shane Rooyakkers, in an interview with Science Daily.  "Krafla is one of the most intensely-monitored and instrumented volcanoes in the world.  They've thrown everything but the kitchen sink at it in terms of geophysics.  And yet we still didn't know there was this rhyolitic magma body sitting at just two kilometers' depth that's capable of producing a hazardous eruption...  So the concern in this case would be that you have a shallow rhyolitic magma that you don't know about, so it hasn't been considered in hazards planning.  If it's hit by new magma moving up, you might have a much more explosive eruption than you were anticipating."
Which is a lot worse than a bunch of giant carnivorous earthworms.
Anyhow, that's our unsettling piece of scientific research for today.  The good news is that it's not like these magma chambers are scattered about everywhere; they still seem to occur only near active volcanoes.  So it's not like an eruption is likely to take place in the middle of Newark, or anything, which is kind of a shame, because an erupting volcano in Newark would probably be considered urban renewal.  But you never know.  Even Kevin Bacon got taken off guard by what's underground.
************************************
This week's Skeptophilia book recommendation is pure fun: Arik Kershenbaum's The Zoologist's Guide to the Galaxy: What Animals on Earth Reveal About Aliens and Ourselves.  Kershenbaum tackles a question that has fascinated me for quite some time; is evolution constrained?  By which I mean, are the patterns you see in most animals on Earth -- aerobic cellular respiration, bilateral symmetry, a central information processing system/brain, sensory organs sensitive to light, sound, and chemicals, and sexual reproduction -- such strong evolutionary drivers that they are likely to be found in alien organisms?
Kershenbaum, who is a zoologist at the University of Cambridge, looks at how our environment (and the changes thereof over geological history) shaped our physiology, and which of those features would likely appear in species on different alien worlds.  In this fantastically entertaining book, he considers what we know about animals on Earth -- including some extremely odd ones -- and uses that to speculate about what we might find when we finally do make contact (or, at the very least, detect signs of life on an exoplanet using our earthbound telescopes).
It's a wonderfully fun read, and if you're fascinated with the idea that we might not be alone in the universe but still think of aliens as the Star Trek-style humans with body paint, rubber noses, and funny accents, this book is for you.  You'll never look at the night sky the same way again.
[Note: if you purchase this book from the image/link below, part of the proceeds goes to support Skeptophilia!]