I have a question: how completely batshit insane does someone have to be before the far-right evangelical Christians will stop listening to them?

It probably will come as no shock that I'm referring here to Rick Wiles, who runs TruNews and his mouth with equal fervor.  Wiles has appeared here in Skeptophilia before, for such pinnacles of rationality as claiming the COVID-19 pandemic was a punishment sent by God because of the United States's support for LGBTQ people, and that if Hillary Clinton had won in 2016, she'd have rounded up conservatives and put them in concentration camps. 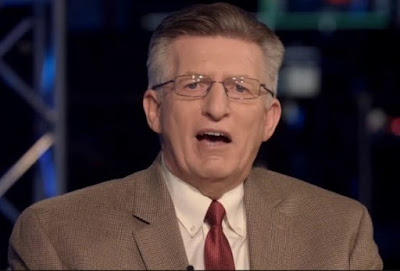 Rick Wiles on one of his frequent insane rants

So expecting any kind of reasonable statement from Wiles is probably a forlorn hope, but even by his standards this week's contribution is way out there.  On this week's TruNews broadcast, he said that Dr. Anthony Fauci should be tortured until he admits that he conspired with the Chinese to create the COVID-19 virus and release it into an unsuspecting populace.

If you're thinking, "Wait... how can it be a punishment sent by God and a deliberate creation of Fauci and his cronies at the same time?", believe me, that's only the beginning of the questions you could ask.

First, lest you think I'm making this up, here are Wiles's exact words:

You’re a liar! You know what you did, Fauci.  You worked with the Chinese Communist Party for years, and you used our own taxpayer money to work on a coronavirus with bats.  And you did it behind our back, deceiving the American people, and you participated in the creation of this virus.  And I’ll say it again, Fauci.  You should be taken to Guantanamo Bay and waterboarded until you cough up the truth, including the names of the other traitors who have helped China damage the United States of America with this virus.

The next day, in case anyone thought he might have come to his senses upon reflection overnight, he basically said the same thing again.

Now, I'll admit up-front that I don't get the evangelical mentality.  To start out with, to buy it, you have to have a completely different standard for reliable evidence than I do.  But all the same... isn't there some point where even the holiest of holy rollers will sit back and say, "Hang on a moment.  This makes no sense whatsoever."?

Because if "jumping the shark" exists in the evangelical world, Wiles has just done a double backward somersault with an aerial cartwheel over the shark.  He's claiming that the guy who has been instrumental in directing our fight against this lethal virus is some kind of mad scientist who created the thing in the first place, and that the American government needs to torture him until he 'fesses up.  Why a virologist with a lifelong career of managing epidemics and saving lives would suddenly go off the rails and create a pandemic, Wiles hasn't told us.

What possible motivation would Fauci have to do this?  Job security?  Seems like there are better ways to keep yourself in business.

But honestly, it's probably not even worth my time to try to put a rational spin on this.  Wiles and his ilk -- such exemplars of sound thinking as Greg Locke, Jim Bakker, Kat Kerr, Dave Daubenmire, and Paula White -- seem to spew out whatever their own particular biases and opinions of the moment are, then add "thus sayeth the Lord" at the end.  Doesn't matter if it makes sense; the only things that matter is keeping their place in the public eye and keeping the donations rolling in.

But you do have to wonder how people can listen to this and nod and say "Right on!"  Isn't there a point, even for bible-thumping literalists, that they will hear something and say, "Okay, that guy is a complete lunatic"?  Or does the fact that they all hate the same people -- LGBTQ folks, minorities, atheists, refugees, liberals -- mean that the listeners will just accept everything else the preachers say as if it was a pronouncement from on high?

So I'm back to where I started: I don't get it.  I know, there's free speech and all, so I know Rick Wiles et al. have the right to air their opinions.  What baffles me is that there's anyone left to listen.

********************************
If, like me, you love birds, I have a book for you.
It's about a bird I'd never heard of, which makes it even cooler.  Turns out that Charles Darwin, on his epic voyage around the world on the HMS Beagle, came across a species of predatory bird -- the Striated Caracara -- in the remote Falkland Islands, off the coast of Argentina.  They had some fascinating qualities; Darwin said they were "tame and inquisitive... quarrelsome and passionate," and so curious about the odd interlopers who'd showed up in their cold, windswept habitat that they kept stealing things from the ship and generally making fascinating nuisances of themselves.
In A Most Remarkable Creature: The Hidden Life and Epic Journey of the World's Smartest Birds of Prey, by Jonathan Meiberg, we find out not only about Darwin's observations of them, but observations by British naturalist William Henry Hudson, who brought some caracaras back with him to England.  His inquiries into the birds' behavior showed that they were capable of stupendous feats of problem solving, putting them up there with crows and parrots in contention for the title of World's Most Intelligent Bird.
This book is thoroughly entertaining, and in its pages we're brought through remote areas in South America that most of us will never get to visit.  Along the way we learn about some fascinating creatures that will make you reconsider ever using the epithet of "birdbrain" again.
[Note: if you purchase this book using the image/link below, part of the proceeds goes to support Skeptophilia!]