Views of the block universe

In the beginning of my as-yet unpublished novel In the Midst of Lions, the character of Mary Hansard realizes one day that she can no longer tell apart the past and the future.

She has memories of both -- if you can call a mental picture of something from the future a memory -- and they both carry equal weight in her brain.  She can determine which is which only in the rare cases where she can verify if an event has occurred yet, such as her "memory" that a building in her neighborhood had burned down, when the (intact) building itself is right in front of her.  But in other cases, such as a conversation between her and a friend, she has no way to know whether it has already happened, or will happen in the future.

For Mary, there aren't three classes of events -- past, present, and future.  There are only two: present and not-present.  A good chunk of the first part of the book is an exploration of how that would affect someone psychologically.  (A summary: "not well.")

The funny thing is that there's nothing in this situation that specifically breaks the laws of physics.  (It's not accidental that I made the character of Mary a high school physics teacher.)  In 2019 I wrote about the peculiar and unresolved problem of "the arrow of time" -- that virtually all physical processes are time-reversible, meaning that they work equally well backwards and forwards.  A simple example is if you watched a video of a pool ball bouncing off the bumper of a billiards table, then ran it backward, there would be no obvious way to tell which was which.  (If you had a longer video, you might be able to tell, because friction with the table would bleed away energy from the ball, causing it to slow down -- so the forward version is the one that shows the ball slowing down, and the backward version is the one in which it speeds up.  This is the approach of the arrow of time problem from the angle of the Second Law of Thermodynamics; if you want to know more, you can check out my post linked above.)

So in terms of physics, it's mystifying why we perceive an arrow of time, when it seems like there's no reason we shouldn't have equal access to both past and future.  "Time is an illusion," Albert Einstein said, "but it is a remarkably persistent one."

Things get even weirder when you start looking into physicist Hermann Minkowski's idea of a block universe, where the three dimensions of space and one of time are mapped onto a three-dimensional solid.  Picture it as a loaf of bread that you can slice at any angle.  The angle of the slice is determined by the relative speed of your reference frame in comparison to the reference frame of what you're looking at, but what it leads us to is that the present loses its simultaneity -- two events that are simultaneous in one reference frame might occur sequentially in another.  Pushed to its ultimate conclusion -- and it must be interjected at this point that once again, there is nothing about Minkowski's ideas that breaks any known law of physics -- this means that an event that is in the past for me might be in the future for you, and therefore all of temporal sequencing is relative.  Minkowski showed that you can model the universe as a block within which exists not only everything in space, but everything in time.  The fact that we haven't gotten to events in the future is no more remarkable than the fact that we haven't gotten to some locations in space yet.  They're still out there, they still exist, even if we haven't seen them.

Kind of casts a harsh light on the concept of free will, doesn't it?

In any case, the topic comes up not because of physics, but because of an article by science writer Eric Wargo over at the site Inner Traditions called "The Amazing Reality of Dream Precognition."  It's an unfortunate choice of titles, because the article is well written and way less woo-woo than it sounds.  Wargo is seriously trying to figure out if people have access to the future, specifically through dreams, and has a project going to do some citizen science and have a large number of people record their dreams, then sift through them to see if there are examples of actual precognition.

It's an interesting idea, although there are some difficulties.  One is that Wargo claims that a lot of dream precognition is symbolic in nature; for example, you might dream of seeing a photograph of a friend shattered into pieces, and soon after she is injured in a terrible automobile accident.  But this requires that we rely on our own interpretation of the symbols after the fact.  And if there's one thing I've learned from ten years of writing here at Skeptophilia, it's that humans are really good at remodeling what actually happened to fit with what they think happened.

That said, Wargo is going about things the right way.  One of the things that has plagued serious research into precognition is that you only know a dream (or thought) is precognitive after the event has occurred, at which point there's always the possibility that your memory of the allegedly precognitive event has been contaminated by your knowledge of what really happened.  Also, there's the unfortunate fact that there are lots of cases of outright falsification.  If the records are made beforehand, this reduces the likelihood of this sort of thing, although it still requires that there be some kind of rigorous standard for keeping track of when the records were written down relative to the event they allegedly predicted.

So the idea is interesting, to say the least, and I need to keep in mind that my inclination to say "this is impossible" is itself a bias.  Even the lack of a mechanism for precognition -- something about which I've written before -- sort of evaporates if Minkowski was right about the block universe.  It still might not explain how you and I, both on the same planet moving at the same speed in the same reference frame, have access to different slices of the spacetime loaf, but at least it takes away one of the most consistent objections, which is that the future is fluid and therefore precognition would constitute looking at something that has no physical reality.

Reminds me of the "fixed points in time" in Doctor Who.  Maybe the truth is that everything is a fixed point in time, not just big events like the eruption of Pompeii. 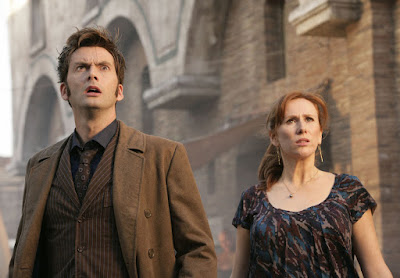 So I'll be interested to see what Wargo comes up with.  Me, I'm keeping an open mind about the whole thing, as counterintuitive as it may seem to me.  If he can come up with actual evidence of precognition, dream or otherwise, it'll force me to re-evaluate a good chunk of how I think the world works.  And my character of Mary Hansard in In the Midst of Lions may turn out to be a rather alarming case of Plato's belief that "art mimics life."

********************************
If, like me, you love birds, I have a book for you.
It's about a bird I'd never heard of, which makes it even cooler.  Turns out that Charles Darwin, on his epic voyage around the world on the HMS Beagle, came across a species of predatory bird -- the Striated Caracara -- in the remote Falkland Islands, off the coast of Argentina.  They had some fascinating qualities; Darwin said they were "tame and inquisitive... quarrelsome and passionate," and so curious about the odd interlopers who'd showed up in their cold, windswept habitat that they kept stealing things from the ship and generally making fascinating nuisances of themselves.
In A Most Remarkable Creature: The Hidden Life and Epic Journey of the World's Smartest Birds of Prey, by Jonathan Meiberg, we find out not only about Darwin's observations of them, but observations by British naturalist William Henry Hudson, who brought some caracaras back with him to England.  His inquiries into the birds' behavior showed that they were capable of stupendous feats of problem solving, putting them up there with crows and parrots in contention for the title of World's Most Intelligent Bird.
This book is thoroughly entertaining, and in its pages we're brought through remote areas in South America that most of us will never get to visit.  Along the way we learn about some fascinating creatures that will make you reconsider ever using the epithet of "birdbrain" again.
[Note: if you purchase this book using the image/link below, part of the proceeds goes to support Skeptophilia!]