If I had to pick the scientific law that is the most misunderstood by the general public, it would have to be the Second Law of Thermodynamics.

The First Law of Thermodynamics says that the total quantity of energy and mass in a closed system never changes; it's sometimes stated as, "Mass and energy cannot be destroyed, only transformed."  The Second Law states that in a closed system, the total disorder (entropy) always increases.  As my long-ago thermodynamics professor put it, "The First Law says you can't win; the Second Law says you can't break even."

Hell of a way to run a casino, that.

So far, there doesn't seem to be anything particularly non-intuitive about this.  Even from our day-to-day experience, we can surmise that the amount of stuff seems to remain pretty constant, and that if you leave something without maintenance, it tends to break down sooner or later.  But the interesting (and less obvious) side starts to appear when you ask the question, "If the Second Law says that systems tend toward disorder, how can a system become more orderly?  I can fling a deck of cards and make them more disordered, but if I want I can pick them up and re-order them.  Doesn't that break the Second Law?"

It doesn't, of course, but the reason why is quite subtle, and has some pretty devastating implications.  The solution to the question comes from asking how you accomplish re-ordering a deck of cards.  Well, you use your sensory organs and brain to figure out the correct order, and the muscles in your arms and hands (and legs, depending upon how far you flung them in the first place) to put them back in the correct order.  How did you do all that?  By using energy from your food to power the organs in your body.  And to get the energy out of those food molecules -- especially glucose, our primary fuel -- you broke them to bits and jettisoned the pieces after you were done with them.  (When you break down glucose to extract the energy, a process called cellular respiration, the bits left are carbon dioxide and water.  So the carbon dioxide you exhale is actually broken-down sugar.)

Here's the kicker.  If you were to measure the entropy decrease in the deck of cards, it would be less -- way less -- than the entropy increase in the molecules you chopped up to get the energy to put the cards back in order.  Every time you increase the orderliness of a system, it always (1) requires an input of energy, and (2) increases the disorderliness somewhere else.  We are, in fact, little chaos machines, leaving behind a trail of entropy everywhere we go, and the more we try to fix things, the worse the situation gets.

I've heard people arguing that the Second Law disproves evolution because the evolutionary model claims we're in a system that has become more complex over time, which according to the Second Law is impossible.  It's not; and in fact, that statement betrays a fundamental lack of understanding of what the Second Law means.  The only reason why any increase in order occurs -- be it evolution, or embryonic development, or stacking a deck of cards -- is because there's a constant input of energy, and the decrease in entropy is offset by a bigger increase somewhere else.  The Earth's ecosystems have become more complex in the 4.5 billion year history of life because there's been a continuous influx of energy from the Sun.  If that influx were to stop, things would break down.

The reason all this comes up is because of a paper this week in Physical Review X that gives another example of trying to make things better, and making them worse in the process.  This one has to do with the accuracy of clocks -- a huge deal to scientists who are studying the rate of reactions, where the time needs to be measured to phenomenal precision, on the scale of nanoseconds or better.  The problem is, we learn from "Measuring the Thermodynamic Cost of Timekeeping," the more accurate the clock is, the higher the entropy produced by its workings.  So, in effect, you can only measure time in a system to the extent you're willing to screw the system up. 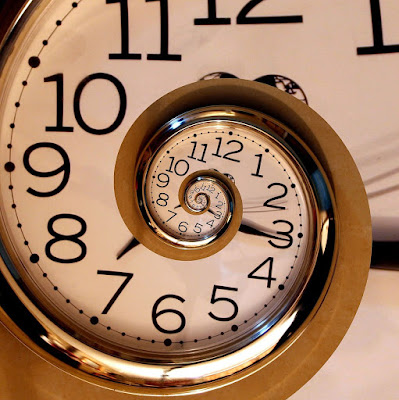 All clocks, in some form or another, use the evolution of nature towards higher entropy states to quantify the passage of time.  Due to the statistical nature of the second law and corresponding entropy flows, fluctuations fundamentally limit the performance of any clock.  This suggests a deep relation between the increase in entropy and the quality of clock ticks...  We show theoretically that the maximum possible accuracy for this classical clock is proportional to the entropy created per tick, similar to the known limit for a weakly coupled quantum clock but with a different proportionality constant.  We measure both the accuracy and the entropy.  Once non-thermal noise is accounted for, we find that there is a linear relation between accuracy and entropy and that the clock operates within an order of magnitude of the theoretical bound.

Study co-author Natalia Ares, of the University of Oxford, summarized their findings succinctly in an article in Science News; "If you want a better clock," she said, "you have to pay for it."

So a little like the Heisenberg Uncertainty Principle, the more you try to push things in a positive direction, the more the universe pushes back in the negative direction.

Apparently, even if all you want to know is what time it is, you still can't break even.

So that's our somewhat depressing science for the day.  Entropy always wins, no matter what you do.  Maybe I can use this as an excuse for not doing housework.  Hey, if I make things more orderly here, all it does is mess things up elsewhere, so what's the point?