Greta of the Yukon

If you needed more evidence of how little it takes to get the woo-woos leaping about making excited squeaking noises, look no further than this photograph, which they're saying proves that Swedish environmental activist Greta Thunberg is a time traveler. 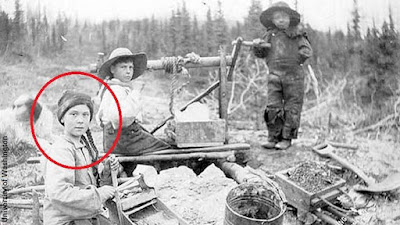 Okay, I'll admit there's a resemblance.  For reference, here's a photograph of the real Greta Thunberg: 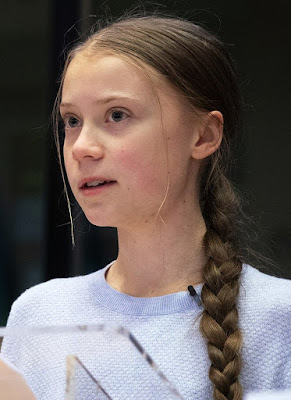 The first image is real enough; it's not a clever fake.  It's a photograph of children working at a Canadian placer gold mine, and was taken in 1898.  The original photograph resides in the archives of the University of Washington, and carries the description, "three children operating rocker at a gold mine on Dominion Creek, Yukon Territory."

This is not the first time this sort of thing has happened.  Previous iterations include an 1870 photograph proving that Nicolas Cage is an undead vampire, and a self-portrait by nineteenth-century French painter Louis-Maurice Boutet de Monvel showing that he's the same person as Keanu Reeves.  What's simultaneously hilarious and maddening about this last claim is that okay, the painting looks a little like Reeves, but later photographs of Boutet de Monvel (which you can see at the link provided) look nothing like him at all.  Which you'd think would make the woo-woos laugh sheepishly and say, "Okay, I guess we were wrong.  What a bunch of goobers we are."  But that never happens.  I'll bet some of them think Reeves realized people were catching on to his undead-ness and arranged for pics to be taken of some other guy that then were labeled with Boutet de Monvel's name.

Because there's no claim so ridiculous that you can't change it so as to make it even more ridiculous.

Lest you think I'm exaggerating how loony these claims get, back to the non-Thunberg photo, which has generated two explanations, if I can dignify them by that term:

What strikes me about both of these, besides the fact that to believe either one you'd have to have a pound and a half of lukewarm cream-of-wheat where most of us have a brain, is that if either of these is Thunberg's strategy, it's not working.  If she's a poor mining kid from 1898 and has come into the future to warn us, mostly what's happening is that government leaders and corporate CEOs are sticking their fingers in their ears and saying "la la la la la la la not listening," while they proceed to continue doing every damnfool destructive thing they've always done, only harder.  If, on the other hand, today's Thunberg is going back into the past to throw a spanner into the works of the mining corporations, it had zero effect, because if you'll look carefully at the history of mining for the last 120 years, you will not find lines like, "Between 1900 and 1950, thirty-seven different mining operations all over North America were shut down permanently, because a mysterious teenage girl with a long braid snuck in and dynamited the entrance to the mining shafts, then disappeared without trace."

So okay, the girl looks a little like Thunberg.  I'll grant you that.  But the claim that she is Thunberg makes me want to weep softly while banging my forehead on my desk.  It seems like the woo-woos have espoused some kind of anti-Ockham's-Razor; given a variety of explanations for the same phenomenon, let's pick the one that is the most ridiculous and requires a metric fuckton of ad hoc assumptions.

I'll just end by stating that if I'm wrong, and Thunberg is an immortal time-traveler, I wish she'd stop wasting her time in the hopeless task of trying to convince the money-grubbing anti-science world leaders we need to stop burning fossil fuels, and go back in time with blueprints for high-efficiency solar cell technology.  Give 'em to Nikola Tesla.  I bet he'd know what to do with them.