The birds and the bees and the flowers and the trees

One of the most fascinating aspects of evolution, and one of the least appreciated (outside of the biology-nerd community, anyhow), is how insects and flowering plants have coevolved.

Coevolution occurs when two different species (or groups of species) reciprocally affect each other's evolutionary changes.  A commonly-cited example is the pair made up of cheetahs and impalas; the fastest cheetahs get more food than the slowest, and the slowest impalas get turned into food more than the fastest, so each species has a tendency to get faster and faster (at least until other considerations, like the limitations of physiology, kick in).  This specific type of coevolution is sometimes called an evolutionary arms race, and can occur not only with speed but with issues like toxicity (in the species being eaten) and toxin tolerance (in the species doing the eating).

The coevolutionary relationship between flowering plants and insects is a curious one.  Certainly, there are insects that eat (and damage, sometimes fatally) plants; witness the gypsy moths that this year have shredded trees in our part of New York state.  Fortunately for our apple and cherry trees and other susceptible species, most trees attacked by gypsy moths survive defoliation and are able to put out another set of leaves once the moths' caterpillars are gone, and because the moths are a "boom-and-bust" species, they seldom mount a serious infestation like this year's more than once a decade or so.

But there's a "nicer" side to coevolution between insects and flowering plants, and that has to do with pollination.  We all learned in elementary school how bees and butterflies pollinate flowers, but it's more complicated than that; insects and plants have in some senses opposite interests in pollination.  For insects, the more different species of flowers they can visit, the more potential nectar sources they can access; but that's actively bad for flowers, because if a bee visits (for example) a rose and then a clover blossom, any pollen transferred does the plant no good at all because the two species aren't cross-fertile.  That pollen is "wasted," from the plant's perspective. 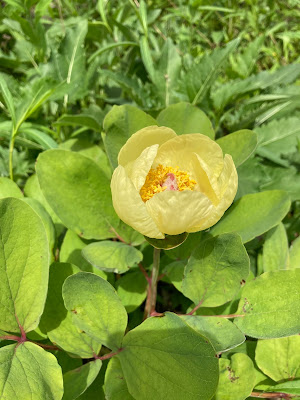 A species peony from the Caucasus Mountains, Paeonia mlokosewitschii -- nicknamed "Molly-the Witch" because most people can't pronounce "mlokosewitschii" -- primarily pollinated by ants and wasps  [photo taken this spring in the author's garden]

Plants have adopted a variety of strategies for coping with this.  Some, such as wind-pollinated plants (oaks, maples, willows, grasses, and many others) produce huge amounts of pollen, because they don't have a carrier to bring it from one flower to the next, and much of the pollen never reaches its target.  (This is why wind-pollinated plants like ragweed are primary culprits in pollen allergies.)  The same thing is true of plants that are visited by many different kinds of pollinators, and for the same reasons.

But the other approach is specialization.  If a flower has a shape that fits the mouthparts of only one species of pollinator, the pollen picked up is almost certainly going to be transferred to a flower of the same species.  In stable ecosystems, like rainforests, there are flowers and pollinators that have coevolved together so long that both are completely dependent on the other -- the pollinator's mouthparts don't fit any other flower species, and the flower's shape isn't compatible with any other pollinator's mouthparts. 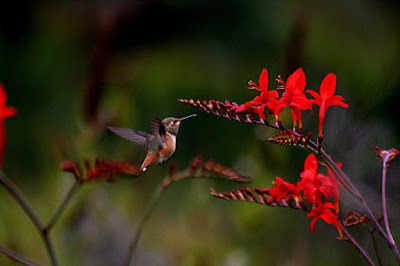 As my evolutionary biology professor put it, this strategy works great until it doesn't.  Specialists get hit hardest by ecological change -- all that has to happen is for one of the pair to decline sharply, and the other collapses as well.  Their specialization leaves them with few options if the situation shifts.

The topic comes up because of a paper this week in Biological Reviews that looks at plant species which try to do both at once -- attract various species of pollinators (increasing the likelihood that pollen gets widely distributed, and mitigating the damage if one species of pollinator disappears) while encouraging those pollinators to feed exclusively on the flowers of that species only (decreasing the likelihood that the pollen will be transferred to a flower of an unrelated species).

A trio of researchers -- Kazuharu Ohashi (of the University of Tsukuba), Andreas Jürgens (of Technishe Universität Darmstadt), and James Thompson (of the University of Toronto) found that this complicated "hedging your bets" strategy is more common than anyone realized.  Some of the solutions the plants happen on are positively inspired; the goat willow (Salix caprea) has evolved to be pollinated by two different pollinators, bees and moths -- and the flowers actually change scents, producing one set of esters (chemicals associated with floral fragrance) during the day, and a different one at night, to attract their diurnal and nocturnal visitors most efficiently.  Cardinal shrub (Weigela spp.) flowers change scent as they age -- young flowers have fragrances attracting bees and butterflies, older ones attracting species like drone flies.

"[Y]ou'd expect that flowers would mostly be visited by one particular group of pollinators," said study lead author Kazuharu Ohashi, in an interview with Science Daily.  "But flowers often host many different visitors at the same time and flowers appear to meet the needs of multiple visitors.  The question we wanted to answer is how this happens in nature... Most flowers are ecologically generalized and the assumption to date has been that this is a suboptimal solution.  But our findings suggest that interactions with multiple animals can actually be optimized by minimizing trade-offs in various ways, and such evolutionary processes may have enriched the diversity of flowers."
Evolution is more subtle than a lot of us realize, happening on solutions to ecological problems that nearly defy belief.  The bucket orchid of South America (Coryanthes spp.) has a flower with a complex "trap" that only appeals to one species of bee -- and is so convoluted that when I explained its function to my biology students, I had to assure them more than once that I wasn't making it all up to fool the gullible.  The strategies vary dramatically from species to species, but always fall back to that tried-and-true rule -- evolution is the "law of whatever works."
So there's something to think about when you're working in your garden.  The birds and the bees and the flowers and the trees are a lot more complicated and interconnected than they may seem.  Many of the sophisticated mechanisms they use to assure survival and reproduction are only coming to light now -- and papers like Ohashi et al. give us a new lens into how beautiful and intricate the natural world is.