The evolution of clumps

If humans operated by logic, rationality, and evidence, there would be arguments we would no longer be having.  A sampler:

The last one is the reason this topic comes up, even though -- as I've pointed out umpteen times -- there is zero doubt amongst biologists (and the majority of educated laypeople) that evolution occurred, and is still occurring.  As Richard Dawkins put it, you could instantaneously destroy every fossil in the world, and the remaining evidence for evolution would still be overwhelming.

But the subject resurfaces because of an elegant experiment I found out about because of a buddy of mine, that (should you still be on the fence, belief-in-evolution-wise) is the 3,948,105th nail in the coffin of the various anti-evolutionary models.  The study looks at multicellularity -- a step in the process of the evolution of complex life that has been a bit of a mystery.  We know it happened; there is a clear progression in Precambrian fossils from single-celled life forms to undifferentiated clumps of more-or-less identical cells to multicellular organisms with differentiated cell types, but exactly how it happened was unclear.

The study was led by Lutz Becks, biologist at the Limnological Institute of the University of Konstanz, and used a simple green algae (Chlamydomonas reinhardtii) to show that in short order, with the appropriate natural selection, multicellularity can evolve from a single-celled ancestor species.

C. reinhardtii does sometimes form clumps of cells, but they are usually small and transitory.  (Nota bene: remember that evolution doesn't create traits; it acts on variations that were already present in the population due to mutations.)  Becks and his team introduced a selective predator, the rotifer Brachionus calyciflorus, which is small enough to have a preference for individual algae cells and smaller cell groups.  The researchers then kept track of the proportion of single to multiple cells in the algae population, as well as the size of any multi-cell groups.

You've probably already guessed what happened.  The population of algae containing predators tilted toward becoming composed almost entirely of larger multicellular groups -- in only five hundred generations (which seems like a lot, but for algae that's only about six months).  Algae raised without the predator didn't change, remaining largely single-celled with a few smaller clumps scattered around. 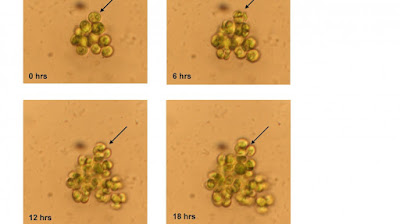 What is coolest about this is that Becks and his team didn't stop there.  They took samples of the algae from both cultures and analyzed them genetically.  They found 76 different genes that showed significant differential expression between the two samples -- so not only were the traits of the population changing, the gene frequencies and activity were, as well.

Just as the evolutionary model predicts.

"We had actually expected that the formation of colonies can be achieved by different mechanisms in the algal cells and we would therefore find different mutations," Becks said, in an interview with Phys.org.  "In fact, we have seen a very high level of repeatability.  This suggests that the selection pressure has had a very targeted effect."

Keep in mind, too, that C. reinhardtii is an asexually-reproducing species -- so the cells are clones, and the only differences genetically are caused by mutations.  This should put to rest the nonsense that mutations can't create "new information" but only corrupt the "old information" that was already there.
In any case, here's yet another experiment supporting the fact that if a population has genetic variations and those variations are subject to a selecting agent, it will evolve.  Here, it's evolved fast enough to see it happening in real time.
Which would be convincing to the anti-evolutionists if they had any respect for evidence.  Which they don't.  So I'm not particularly hopeful that this will change the minds of the creationists and the intelligent-design cadre.  As Thomas Paine put it, "To argue with a man who has renounced the use and authority of reason is like administering medicine to the dead."
**************************************
I've loved Neil de Grasse Tyson's brilliant podcast StarTalk for some time.  Tyson's ability to take complex and abstruse theories from astrophysics and make them accessible to the layperson is legendary, as is his animation and sense of humor.
If you've enjoyed it as well, this week's Skeptophilia book-of-the-week is a must-read.  In Cosmic Queries: StarTalk's Guide to Who We Are, How We Got Here, and Where We're Going, Tyson teams up with science writer James Trefil to consider some of the deepest questions there are -- how life on Earth originated, whether it's likely there's life on other planets, whether any life that's out there might be expected to be intelligent, and what the study of physics tells us about the nature of matter, time, and energy.
Just released three months ago, Cosmic Queries will give you the absolute cutting edge of science -- where the questions stand right now.  In a fast-moving scientific world, where books that are five years old are often out-of-date, this fascinating analysis will catch you up to where the scientists stand today, and give you a vision into where we might be headed.  If you're a science aficionado, you need to read this book.
[Note: if you purchase this book using the image/link below, part of the proceeds goes to support Skeptophilia!]