It will come as no surprise to regular readers of Skeptophilia that I have a peculiar fascination for things that are huge and powerful and can kill you.

I'm not entirely sure where this obsession comes from, but it's what's driven me to write here about such upbeat topics as giant predatory dinosaurs, tornadoes, hurricanes, massive earthquakes, supernovas, gamma-ray bursters, and the cheerful concept of "false vacuum decay" (which wouldn't just destroy the Earth, but the entire universe).  I'm guessing part of it is my generally anxiety-ridden attitude toward everything; after all, just because we don't think there's a Wolf-Rayet star nearby that's ready to explode and fry the Solar System doesn't mean there isn't one.  I know that worrying about all of that stuff isn't going to (1) make it any less likely that it'll happen, or (2) make a damn bit of difference to my survival if it does, but even so I don't seem to be able to just relax and focus on more positive things, such as the fact that with the sea-level rise predicted from climate change, it looks like here in upstate New York I may finally own ocean-front property.

It's also why I keep regular tabs on the known volcanoes on the Earth -- on some level, I'm always waiting for the next major eruption.  One of the potentially most dangerous volcanoes on Earth is in Italy, and I'm not talking about Vesuvius; I'm referring to the Campi Flegrei ("burning fields," from the Greek φλέγω, "to burn"), which isn't far away from the more famous mountain and seems to be powered by the same magma chamber complex that obliterated Pompeii and Herculaneum in 79 C.E.  Both Vesuvius and Campi Flegrei are highly active, and near the top of the list of "world's most dangerous volcanoes."

The problem is, the three million residents of Naples live right smack in between the two, only twenty-odd kilometers away from Vesuvius (to the east) and Campi Flegrei (to the west).  (For reference, Pompeii was nine kilometers from the summit of Vesuvius.) 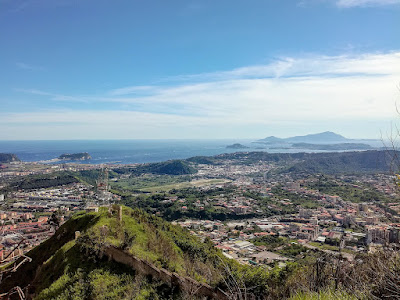 The problem is that volcanoes like these two don't erupt like the familiar fountains of lava you see from Kilauea on the Big Island of Hawaii, and the current eruption on La Palma in the Canary Islands.  The most typical eruption from volcanoes like Vesuvius and Campi Flegrei are pyroclastic flows -- surely one of the most terrifying phenomena on Earth -- a superheated mass of steam and ash that rush downhill at speeds of up to a hundred kilometers an hour, flash-frying everything in its wake.  That the Campi Flegrei volcanoes are capable of such massive events is witnessed by the surrounding rock formation called the "Neapolitan Yellow Tuff."  A "welded tuff" is a layer of volcanic ash that was so hot when it stopped moving that it was still partially molten, and fused together into a solid porous rock.

The Neapolitan Yellow Tuff isn't very recent; it came from an eruption about 39,000 years ago.  But there are signs the Campi Flegrei are heating up again, which is seriously bad news not only for Naples but for the town of Pozzuoli, which was built right inside the main caldera.

That people would build a town on top of an active volcano is explained mostly by the fact that people have short memories.  And also, the richness of volcanic soils is generally good for agriculture.  Once Pompeii was re-discovered in the middle of the eighteenth century, along with extremely eerie casts of the bodies of people and animals who got hit by the pyroclastic flow, you'd think people would say, "no fucking way am I living anywhere near that mountain."  But... no.  If you'll look at a world map, you might come to the conclusion that siting big cities near places prone to various natural disasters was some kind of species-wide game of chicken or something.

In any case, the good news is that a recent study showed that even if Campi Flegrei is (1) heating up, and (2) eventually going to erupt catastrophically, there's no sign it's going to happen any time soon, and it's pretty likely we'd have plenty of warning if an eruption was imminent.

But still.  Such phenomena make me feel very, very tiny.  And once again, thankful that I live in a relatively peaceful, catastrophe-free part of the world.  Our biggest concern around here is snow, and even that's rarely a big deal; we don't get anything like the killer blizzards that bury the upper Midwest and Rocky Mountain states every year.  Given my generally neurotic outlook on life, I can't imagine what I'd be like if I did live somewhere that had serious natural disasters.

Never leave my underground bunker, is probably pretty close to the mark.