Worried about aliens and/or the Illuminati and/or Bill Gates beaming secret subconscious orders directly into your brain?  Want to protect yourself from evil external influences?  Tired of running down to the supermarket every other day to buy a new roll of Reynolds Wrap?

Have I got a product for you.

I was gonna add, "Do you have no idea how electronic technology works?" but then I decided that (1) it was redundant because "no idea about technology" probably overlaps pretty completely with people who answered "yes" to the preceding three questions, and (2) I'm no electrical engineer myself.  But I do know enough to feel relatively confident that no one is trying to 5G my brainwaves or whatnot every time I turn on my phone.

Now, I'm not saying that the tech corporations aren't trying to hack your preferences in non-woo-woo ways.  It's no big secret that all you have to do is to search once for something online, and you will immediately be crushed to death under a million advertisements for the product on every social media platform known.  Sometimes, just saying it is enough; if your phone is on (or, for that matter, Alexa, EchoDot, or Siri), you can assume you're being listened to.  It's not by the Illuminati, though.  Trust me, the Illuminati don't give a flying rat's ass what you are fixing for lunch.  Advertisers, though, do; they care deeply.  In an incident I swear I am not making up, my wife and I were in the car laughing about people who dress their dogs up for Halloween, and I commented that with our dog's long legs and lanky frame, we should get her a Star Wars AT-AT Walker costume.  When I got home, I turned on my computer, got onto Facebook, and...

... the first thing I saw was an advertisement for AT-AT costumes for dogs.

So if they're listening in, it's not to turn you into a mindless automaton, it's to get you to pull out your wallet and order useless shit online.

Which, now that I come to think of it, aren't all that different.

He responded by blocking me.  You can't win.

In any case, my point is that even if they were able to beam subconscious commands directly into your cerebral cortex (which they can't), they don't need to.  We do the big corporations' bidding just fine as it is.  But in case you're still worried, and even after buying a ridiculous costume for your dog you still have more money than sense, allow me to direct your attention to a site where you can buy... 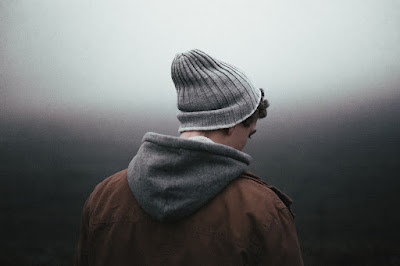 [Image is in the Public Domain courtesy of photographer Andrew Neel]

The site describes the beanie as follows:

WaveStopper™ uses a proprietary concept that includes a tight mesh of SilverFlex™ fibers carefully woven to create an electromagnetic shield.  The conductivity of SilverFlex™ mesh cancels out the magnetic field of EMFs and as a result reflects the radiation outside the garment.  WaveStopper™ is tested in military-grade laboratories and certified to be blocking over 99% of EMFs including cellphone, 4G, 5G WiFi, and Bluetooth radiation.

In case the guys in my readership think that you're also getting commands beamed directly into your testicles, they also sell Faraday Cage Boxer Briefs.  You probably know that a Faraday cage is a mesh of conductive material that shields what is inside it from electromagnetic fields; they're used routinely to protect electronic equipment from powerful EMFs nearby.  As far as the low-level EMFs we're exposed to daily, the current research strongly supports the fact that they have no harmful health effects.  The World Health Organization has the following to say:

In the area of biological effects and medical applications of non-ionizing radiation approximately 25,000 articles have been published over the past 30 years.  Despite the feeling of some people that more research needs to be done, scientific knowledge in this area is now more extensive than for most chemicals.  Based on a recent in-depth review of the scientific literature, the WHO concluded that current evidence does not confirm the existence of any health consequences from exposure to low-level electromagnetic fields.

The upshot of it is that you don't have to worry about Faraday-caging your junk unless you're considering placing it inside a microwave oven and turning it on.

Like I said before, it's not that I am unaware that big corporations are constantly finding new ways to hack your preferences for their own purposes (as are political parties; witness the Cambridge Analytica scandal).  It's just that they're not doing it by 5G-ing your brain.  We give them our information all the time, voluntarily and often without a second thought.  Besides doing Google searches for stuff, we get suckered every day by ploys like the seemingly silly and lighthearted posts that pop up regularly on Facebook and Twitter.  "Your rock band name is the color of your underwear + the last thing you ate for a snack."  "If you reversed the digits of your age, how old would you be?"  "What was the #1 hit song when you were twelve years old?"  "Your stripper name is your grandma's first name + the street you grew up on."  Some of these are clearly fishing for information that is commonly used on security questions; but even the more innocuous ones are trying to find out your demographics, your preferences, and your habits.  Let me put this bluntly: you should never answer questions like these.  Ever.  Maybe some of them are just goofy posts from people wanting to bump up their interaction rate on Twitter, but enough of them are sketchy that you should avoid them all.  Even answering them "I'm not answering this because it's trying to do data mining" just clues in the originator that they have someone who will take the time to answer... and as a result, you'll see more and more such posts.

Close the damn social media, shut off your computer and your phone, and go for a long walk.  That'll clear your mind nicely, even without a protective EMF-repelling beanie.

*****************************************
I've mentioned before how fascinated I am with the parts of history that still are largely mysterious -- the top of the list being the European Dark Ages, between the fall of Rome and the re-consolidation of central government under people like Charlemagne and Alfred the Great.  Not all that much was being written down in the interim, and much of the history we have comes from much later (such as History of the Kings of Britain, by Geoffrey of Monmouth, chronicling the events of the fourth through the eighth centuries C.E. -- but written in the twelfth century).
"Dark Ages," though, may be an unfair appellation, according to the new book Matthew Gabriele and David Perry called The Bright Ages: A New History of Medieval Europe.  Gabriele and Perry look at what is known of those years, and their contention is that it wasn't the savage, ignorant hotbed of backwards superstition many of us picture, but a rich and complex world, including the majesty of Byzantium, the beauty and scientific advancements of Moorish Spain, and the artistic genius of the master illuminators found in just about every Christian abbey in Europe.
It's an interesting perspective.  It certainly doesn't settle all the questions; we're still relying on a paucity of actual records, and the ones we have (Geoffrey's work being a case in point) sometimes being as full of legends, myths, and folk tales as they are of actual history.  But The Bright Ages goes a long way toward dispelling the sense that medieval Europe was seven hundred years of nothing but human misery.  It's a fascinating look at humanity's distant, and shadowed, past.
[Note: if you purchase this book using the image/link below, part of the proceeds goes to support Skeptophilia!]