Birds of a feather

The word species has got to be the mushiest term in all of science.

It's one of those situations where you think you know what something means until you start pushing on it.  When humans started to put a serious effort into categorizing other life forms -- Aristotle is usually credited with being the first to do this in a systematic way -- it seemed obvious enough.  Members of a species are similar morphologically.  Put more simply, you can tell a cat from a dog because they look different.

The problem is, this starts to cause problems just about immediately.  What about organisms that look very different, but we still consider to be the same species?  Dogs, in fact, are a good example.  Imagine you're an alien scientist arriving on Earth, and you're looking at a St. Bernard and a chihuahua.  If a human said, "These are the same species," my guess is you'd do whatever passes for laughter on your home world, then get back in your spaceship and fly away after writing "No intelligent life" on the map of the Solar System.

It only got worse from here.  An awkward difficulty with the above definition is, what about asexual species?  They kind of don't fit in no matter how you look at it.  Oh, well, maybe they get their own version of the definition.  But what about ring species?  This is a group of populations, often arranged in a ring around a geographical barrier (thus the name) where all of them can interbreed except for the ones at the "ends" of the ring  It's been observed multiple times, including a group of salamanders in California, the Greenish Warbler of central Asia, and a ring of gull species -- the latter of which goes all the way around the world.

So do these represent one species, or many?  Within the ring, some of them are interfertile, and others aren't.  And splitting the ring doesn't help; then you're separating populations that are interfertile.  In fact, like asexual species, ring species seem to be unclassifiable with the canonical definition.

It all comes, my evolutionary biology professor said to us, from the desperation humans have to pigeonhole everything.  "The only reason we came up with the concept of a species in the first place," he said, "is because humans have no near relatives."

Of course, none of this sits well with the creationists, because a central tenet of their beliefs is that each kind of life form was created by God as-is and nothing's changed since.  Which is all well and good until you ask, "What do you mean by 'kind of life form'?"  They respond that God created "discrete forms with genetic boundaries to interbreeding," which they call baramins (a neologism coined from the Hebrew words for "created" and "kind").  So the ring species of gulls isn't a problem because gulls are a "kind."  In fact, you can define "kind" in this context as "a classification of life forms that conveniently makes all of the internal contradictions go away.  Now stop asking questions."

In any case, there really is no good, consistent definition of species that covers all the exceptions.  Even now that we have genetic analysis -- which is currently the touchstone for classification -- it only further reinforces the fact that evolution generates a continuum of forms, and you're asking for trouble if you try to subdivide them.  Only in cases like ourselves, where there are no living near relatives, does it seem clear-cut.

Take the study out of the University of Colorado that appeared in Nature Communications this week.  It's about a trio of species of birds, so being a rather fanatical birder, it immediately caught my eye.  The species involved (and I use that term guardedly, for reasons that will become obvious) are the Common Redpoll, (Acanthis flammea) the Hoary Redpoll (Acanthis hornemanni), and the Lesser Redpoll (Acanthis cabaret), all types of finch with a characteristic red splotch on the forehead. 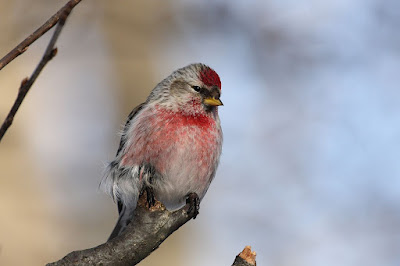 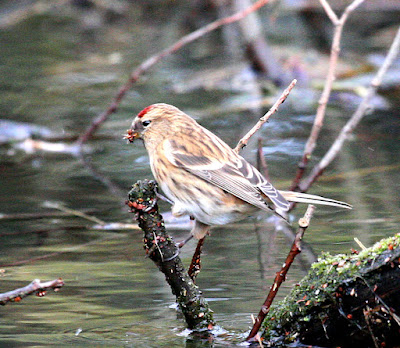 However, the differences aren't huge.  We get Common Redpolls at our bird feeders in winter fairly regularly, but Hoary Redpolls are a rare sighting in our area.  Every winter I scan the flocks of redpolls looking for whiter individuals, but I still have never seen one.  However, I may be able to cross that one off the list of "species I haven't seen" -- because the current study has shown that despite the differences in appearance, all three are a single species. 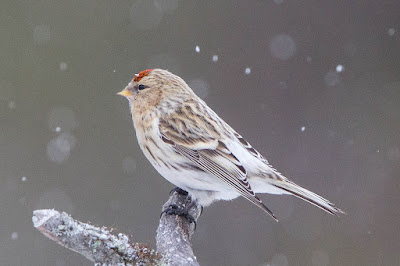 The color and size differences, the researchers found, are due to a "supergene complex" -- a single cluster of genes that work together to produce a specific phenotype.  What's striking is that despite the differences in that gene complex between the three different groups of redpolls, they are otherwise about as genetically identical as it's possible to get.  And... they're all potentially interfertile.

"Often times we assume that a lot of traits can act independently, meaning that different traits can be inherited separately from one another, but this particular result shows that sometimes these traits are actually tightly linked together," said Erik Funk, lead author on the paper, in an interview in Science Daily.  "At least for these birds, they're inheriting a whole group of traits together as one."
Birders tend to hate it when confronted with "lumpers," as they call researchers who merge species together, therefore reducing the number of potential birds to chase after.  They much prefer "splitters," who take previously single species and subdivide them, like another "winter finch," the Red Crossbill (Loxia curvirostra), which according to some taxonomists isn't a single species but several -- possibly as many as seven.  In any case, my point here is that this kind of thing happens all the time.  Like I said at the beginning, we think we have a clear idea of what's meant by a species until we start examining it.
But to me, this only increases my fascination with the natural world.  It's a beautiful, subtle, and complex interlocking web of organisms, and maybe the most surprising thing of all is that we do think it should be simple and easily classifiable.  As usual, our scheme for understanding the world turns out to be woefully inadequate -- and once again, science has come to the rescue by turning a lens on a small and unassuming bird as a way of pointing out how much more we have to learn.
*******************************
As I've mentioned before, I love a good mystery, which is why I'm drawn to periods of history where the records are skimpy and our certainty about what actually happened is tentative at best.  Of course, the most obvious example of this is our prehistory; prior to the spread of written language, something like five thousand years ago, most of what we have to go by is fossils and the remnants of human settlements.
Still, we can make some fascinating inferences about our distant ancestors.  In Lost Civilizations of the Stone Age, by Richard Rudgely, we find out about some of the more controversial ones -- that there are still traces in modern languages of the original language spoken by the earliest humans (Rudgely calls it "proto-Nostratic"), that the advent of farming and domestication of livestock actually had the effect of shortening our average healthy life span, and that the Stone Age civilizations were far more advanced than our image of "Cave Men" suggests, and had a sophisticated ability to make art, understand science, and treat illness.
None of this relies on any wild imaginings of the sort that are the specialty of Erich von Däniken, Zecharia Sitchin, and Giorgio Tsoukalos; and Rudgely is up front with what is speculative at this point, and what is still flat-out unknown.  His writing is based in archaeological hard evidence, and his conclusions about Paleolithic society are downright fascinating.
If you're curious about what it was like in our distant past, check out Lost Civilizations of the Stone Age!
[Note: if you purchase this book using the image/link below, part of the proceeds goes to support Skeptophilia!]