Bred in the bone

A while back I had my DNA tested.  I know a good bit about my family tree, and I did it not only to find out about my genetic heritage, but to see if the DNA tests were as accurate as they claim -- a bit like a teacher being able to tell if a student is doing a problem correctly because (s)he already knows what the answer should be.

The answer is: it's pretty damn good.  The most interesting was from a company called My True Ancestry, which supposedly was working off an enormous data bank and could do some seriously fine-grained analysis.  I uploaded my DNA file, and within a few hours I had a map of the closest matches, and they turned out to be spot-on.  It picked up my great-great grandfather Solomon Meyer-Lévy, who was an Ashkenazi Jew from Alsace, and also my father's paternal ancestry, which came from the French Alps.  The rest of my family was scattered through western and northwestern France, England (a cluster in southern England and one in Yorkshire), and two spots in Scotland (one near Glasgow, one near Edinburgh).

This aligns pretty much perfectly with what I know about the origins of my family.  The "pretty much" comes from one puzzling finding; it showed no matches in Germany.  Another great-great grandfather, one William Brandt, came to America in the mid-1800s and married a woman of French and Dutch ancestry named Isabella Rulong.  I know William was German; on the census his birthplace is given as Bremen, so I even know the city.  But my DNA shows zero ancestry in Germany.

However, the answer to this mystery could be simple.  I know a bit about William Brandt because the house he built in the 1870s is on the Louisiana Register of Historic Homes.  William was the court recorder for Lafayette Parish for almost twenty years, and served as mayor for a year.  But the woman who now lives in what was Brandt's house gave us a tour and told us a little about what she knows about my ancestor, and apparently he wasn't exactly a pinnacle of exemplary behavior.  He was, she said, a notorious drunkard, frequently having to be rescued from some ditch or another he'd fallen into after his latest night on the town. 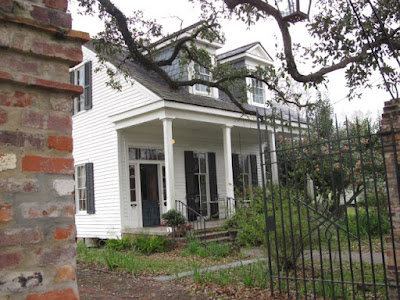 This may explain why he held the office of mayor for only a year, something that has always intrigued me.  And it may well also account for my lack of German ancestry.  It's entirely possible that my great-great grandmother Isabella found a friend, as it were, to provide solace and comfort in the absence of her ne'er-do-well husband, and this unknown is actually my biological great-great grandfather.  A study two years ago found that about one percent of births worldwide are due to what they euphemistically call "extra-pair paternity," which is why you have to sign a waiver when you get your DNA tested that you won't hold the company responsible if your results aren't quite what you expected.

So I think there's a pretty good chance that my great grandmother, Mary Emily (Brandt) Bonnet, was not actually William's daughter.  Just as well.  I have enough rogues and scoundrels in my family as it is.

It's amazing what we can now figure out by DNA analysis.  A study just published this week in Nature, written by a team of researchers way too long to list here, used DNA samples from bones and teeth found at burial sites in England to see if they could figure out who came from where and when, and found that in the Late Bronze Age (1,200 to 800 B.C.E.) there was a huge influx of people from what is now northwestern France.  These people, who were probably formed of different tribes but are what we usually collectively call "Celtic," eventually replaced fifty percent of the indigenous pre-invasion population.

"By using genetic data to document times when there were large-scale movements of people into a region, we can identify plausible times for a language shift," said study co-author David Reich of Harvard University, in an interview with Science Daily. "Known Celtic languages are too similar in their vocabularies to plausibly descend from a common ancestor 4,500 years ago, which is the time of the earlier pulse of large-scale migration, and very little migration occurred in the Iron Age.  If you're a serious scholar, the genetic data should make you adjust your beliefs: downweighting the scenario of early Celtic language coming in the Iron Age [and early Bronze Age] and upweighting the Late Bronze Age."
England, of course, has been invaded and settled several times since then; by the Romans in the first century C.E., by the Germanic Anglo-Saxons starting in the sixth century, then by the Norman French in the eleventh.  Each new pulse of invaders brought along their own languages and culture -- and their DNA.  That we can look at bones today and see the genetic history of the people they came from is pretty stupendous.
One of the coolest pieces of this research has to do with lactose tolerance.  You probably know that lactose is a sugar that is easily digested by most mammals only in infancy, and adults lose their tolerance for it.  (This is why it's not a good idea to feed milk to an adult cat.)  But some people retain the ability to digest lactose -- it's most common in Europe, and is caused by a single gene.  Lactose tolerance seems to have spread along with the practice of keeping dairy cattle, for obvious reasons.  And in the period studied by the research, the incidence of the lactose-tolerance gene skyrocketed, so the new influx of settlers seem to have been milk drinkers -- and brought along their cattle.
It's amazing what we can learn from a bunch of three-thousand-year-old bones, and that the DNA fragments still contained within them give us a window into the movements of people during a time we know little about otherwise.  In my case, we're talking about people who are likely to be my ancestors (all "extra-pair paternity events" aside).  One more example of the wisdom in the saying carved into the wall of the Temple of Apollo at Delphi: γνῶθι σεαυτόν ("know yourself").
Or, as John Heywood put in in 1546: "What's bred in the bone comes out in the flesh."