Caught in the sea's net

The specter of climate change is getting difficult to ignore.  While you still can't point at a particular event and say "that happened because of anthropogenic climate change" -- as I said about a million times to my students, "climate isn't the same as weather" -- we've had enough anomalous heat waves, droughts, floods, and storms in the past ten years that it's getting harder and harder to deny unless you go around with blinders on or are just plain stupid.  (The latest being the catastrophic tornadoes that tore through Kentucky a couple of weeks ago, despite it being December, usually a low point in tornado occurrence and intensity.)
There are signs that even the science deniers are beginning to have some traces of second thoughts about the whole thing.  A study in Nature Scientific Reports a few weeks ago found that "climate contrarians" have of late begun to shift their ground, from outright denial that it's happening to attacking the researchers' integrities and the solutions they propose.  While this is still maddening to those of us who can actually read and understand a scientific paper, it's at least a tentative step in the right direction.  "I don't like the people who are saying this" and "the solutions won't work/are too expensive" are better than "this isn't happening" and "la la la la la la la not listening."
But the evidence that the situation is perilous keeps piling up.  One of the consequences of climate change most people don't think a lot about is sea level rise, mostly because the numbers seem insignificant; for example, a recent study showed that in the twenty-seven years between 1993 and 2020, the average sea level rose by a centimeter, and the rate of rise in the past ten years is triple what it was in the twentieth century.
It's easy to say, "a centimeter?  That's hardly anything."  But that ignores a couple of things.  First, that's an average; because of patterns of melt water, and sea and wind currents, some places have seen an increase of up to twenty centimeters, easily enough to cause devastating coastal flooding and infiltration of fresh-water aquifers with salt.  Second, there's geological evidence that when the sea level rises, it can happen in fits-and-starts, as ice shelves (primarily in Greenland and Antarctica) collapse.  Given how many people live in low-lying coastal areas, it wouldn't take much to cause a humanitarian catastrophe.
Another pair of studies that came out just last week have illustrated how vulnerable coastal communities have been -- and still are -- to changes in sea level.  Archaeologists uncovered evidence from two millennia ago in southern Brazil indicating that a drop in sea level due to increases in polar ice exposed shellfish beds that the coastal indigenous people depended on, and led to wide abandonment of settlements in the area.  The opposite happened in Greenland in the fourteenth century -- coastal communities that had been settled by Vikings three centuries earlier got swamped, eradicating coastline and driving the settlers up against uninhabitable glacial regions.  They were caught between the rising seas and the rising ice, trapped in an ever-shrinking strip of land that eventually disappeared completely. 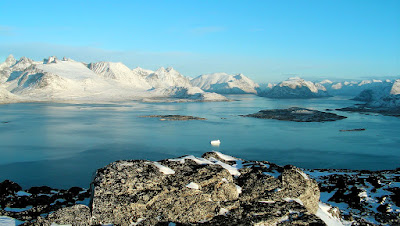 [Image licensed under the Creative Commons Jensbn, Greenland scenery, CC BY-SA 3.0]
My initial reaction to the latter paper was puzzlement; the fourteenth century was the height of the Little Ice Age, so you'd think the freeze-up would have lowered sea level, not raised it.  But I was failing to take into account isostasy, which is the phenomenon caused by the fact that the continents are literally floating in the magma of the mantle.  Just like adding weight to a boat causes it to ride lower in the water, adding weight to a continent causes it to sink a little into the mantle.  So when the ice sheets built up on Greenland, it pushed it downward, submerging habitable coastline.  (The opposite has happened as the glaciers have melted; in fact, it's still happening in Scandinavia, Canada, and Scotland, the latter of which is still undergoing isostatic rebound at a rate of ten centimeters of uplift per century.)
The deniers are right about one thing; the Earth has certainly experienced climatic ups and downs throughout its long history.  What's terrifying right now is the rate at which it's happening.  A study from the International Panel on Climate Change found persuasive evidence that the rate of temperature increase we're seeing is higher than it's been since the Paleocene-Eocene Thermal Maximum, over fifty million years ago.
If that doesn't scare you, I don't know what would.
It's the humanitarian cost that's been on my mind lately, not just because of today's climate change, but the changes that have occurred historically.  I was so captivated by the tragedy of the disappearance of the Norse settlements in Greenland that years ago, it inspired me to write a poem -- one of the few I've ever written.  What would it be like to be the last person alive in a place, knowing no one would come to rescue you?  I can only hope humanity's fate won't be so bleak -- but whenever I think about our reckless attitude toward the environment, this haunting image comes to mind, and I thought it would be a fitting way to end this post.
Greenland Colony 1375

He goes down to the sea each day and walks the shore.
Each day the gray sea ice is closer, and fewer gulls come.
He wanders up toward the village, past the empty and ruined rectory.
The churchyard behind it has stone cairns.  His wife lies beneath one,
And there is one for Thórvald, his son,
Though Thórvald's bones do not rest there; he and three others
Were gathered ten years ago in the sea's net
And came not home.

Since building his son's cairn,
He had buried one by one the last four villagers.
Each time he prayed in the in the stone church on Sunday
That he would be next,
And not left alone to watch the ice closing in.

In his father's time ships had come.  The last one came
Fifty years ago.
Storms and ice made it easy for captains to forget
The village existed.  For a time he prayed each Sunday
For a ship to come and take him to Iceland or Norway or anywhere.
None came.  Ship-prayers died with the last villager,
Three years ago.  He still prayed in the stone church on Sunday,
For other things; until last winter,
When the church roof collapsed in a storm.
The next Sunday he stayed home and prayed for other things there.

Now even the gulls are going,
Riding the thin winds to other shores.  Soon they will all be gone.
He will walk the shore, looking out to sea for ships that will never come,
And see only the gray sea ice, closer each day.