Whenever we have a wet summer -- not an uncommon occurrence in our rainy climate -- we have a plague of little pests trying to get into our house.

They're called millipedes, slinky guys maybe a couple of centimeters long, with lots of legs (not a thousand, though).  They're completely harmless; they don't bite like their cousins the centipedes do, and if you poke at them, they coil up into a ball.  So I guess they're really more of a nuisance than an actual problem.  They don't even damage anything, the way mice can.  Mostly what they seem to do is get in through every crack and crevice (there are lots of these in a big old house like ours), look around for a while, then curl up and die. 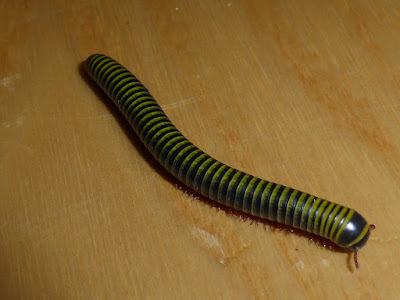 So I don't like them, and I wish they stayed outside, but in the grand scheme of things they're no big deal.  Imagine, though, if they were bigger.

Just last week, paleontologists announced the discovery on a beach in Northumberland, England, of a millipede fossil from the Carboniferous Period.  It's been dated to the middle of the period, about 326 million years ago.  It looks a bit like the millipedes I see trundling across my basement floor in summer.

Only this one was 2.6 meters long (approximately the length of a Mini Cooper), a half a meter across, and weighed something on the order of fifty kilograms.

It's been named Arthropleura, and holds the record as the largest-known arthropod in Earth's history.  Nothing is known for sure about its behavior; if it's like the rest of millipedes, it was a scavenger on leaf detritus, but there's no way to know for certain.  Given its size, it could well have been a lot more dangerous than the ones we have around now.  To paraphrase the old joke about five-hundred-pound gorillas:

Q:  What does a fifty-kilogram millipede eat?

A:  Anything it wants.

Those of you who are (like me) biology nerds may be frowning in puzzlement at this point.  How on earth could an arthropod get so big?  Their size is limited by the inefficiency of their respiratory system (not to mention the weight of their exoskeletons).  Most arthropods (millipedes included) breathe through pairs of holes called spiracles along the sides of the body.  These holes open into a network of channels called tracheae, which bring oxygen directly to the tissues.  Contrast that with our system; we have a central oxygen-collecting device (lungs), and the hemoglobin in our blood acts as a carrier to bring that oxygen to the tissues.  It's a lot more efficient, which is why the largest mammals are a great deal bigger than the largest arthropods.  (So, no worries that the bad sci-fi movies from the 50s and 60s, with giant cockroaches attacking Detroit, could actually happen.  A ten-meter-long cockroach not only wouldn't be able to oxygenate its own tissues fast enough to survive, it couldn't support its own weight.  It wouldn't eat Detroit, it would just lie there and quietly suffocate.)

So how could there be such ridiculously enormous millipedes?

The answer is as fascinating as the beast itself is.  As the temperature warmed and rainfall increased after the previous period (the Devonian), it facilitated the growth of huge swaths of rain forest across the globe.  In fact, it's the plant material from these rain forests that produced the coal seams that give the Carboniferous its name.  But the photosynthesis of all these plants drove the oxygen levels up -- by some estimates, to around 35% (contrast that to the atmosphere's current 21% oxygen).  This higher oxygen level facilitated the growth of animals who are limited by their ability to uptake it -- i.e., arthropods.  (At the same time, there was a dragonfly species called Meganeura with a seventy-centimeter wingspan.  And unlike millipedes, these things were carnivores, just as modern dragonflies are.)

Eventually, though, the system was unsustainable, and a lot of the rain forests began to die off in the Late Carboniferous, leading to a drier, cooler climate.  However, remember the coal seams -- by that time a huge percentage of the carbon dioxide that had fed the photosynthesis of those rain forests was now locked underground.  The fuse was lit for a catastrophe.

Fast forward to the end of the next period, the Permian, 255 million years ago.  What seems to have happened is a series of colossal volcanic eruptions that created the Siberian Traps, a basalt deposit covering most of what is now Siberia.  The lava ripped through the coal seams, blasting all that stored carbon into the atmosphere as carbon dioxide.  The temperature in the late Permian had been cool and dry, and the spike of carbon dioxide created a commensurate spike in the temperature -- as well as a huge drop in oxygen, used up by the burning coal.  The oxygen concentration seems to have bottomed out at around twelve percent, just over half of what it is now.  The extra carbon dioxide dissolved into ocean water, dropping the pH, and the increasing acidity dissolved away the shells of animals who build them out of calcium carbonate -- e.g. corals and mollusks.

Wide swaths of ocean became anoxic, acidic dead zones.  The anaerobic organisms began to eat through all the dead organic matter, churning out more carbon dioxide and another nasty waste product, sulfur dioxide (which gives the horrible smell to rotten eggs, and is also an acidifier).  The result: an extinction that wiped out an estimated ninety percent of life on Earth.  In short order, a thriving planet had been turned into a hot, dead, foul-smelling wasteland, and it would take millions of years to recover even a fraction of the previous biodiversity.

Of course, at highest risk would be the big guys like our friends Arthropleura and Meganeura, and the Earth hasn't seen giant arthropods like this since then.  Today, the largest arthropod known is the Japanese spider crab (Macrocheira), topping out at around twenty kilograms -- but crabs and other crustaceans have gills and an oxygen carrier called hemocyanin, so they can boost the efficiency of their respiratory system somewhat over their terrestrial cousins.  The largest insect today is the African Goliath beetle (Goliathus), at about a tenth of a kilogram.  And in today's atmosphere, it's at a pretty significant disadvantage.  They may look big and scary, but in reality, they're slow-moving, harmless creatures.  Kind of a beer can with six legs, is how I think of them.

So that's today's look at creepy-crawlies of the past.  In my opinion it's just as well the big ones became extinct.  The last thing I need is having to shoo a fifty-kilogram millipede out of my basement.