Did you hear the quote from Senator Brad Zaun, Chairman of the Judiciary Committee for the Iowa State Senate, a few days ago?

There are those homosexuals who take the view: what I do is my business, a purely private matter.  However, all things which take place in the sexual sphere are not the private affair of the individual, but signify the life and death of the nation... in each case, these people [should] naturally be publicly degraded, expelled, and handed over to the courts.

Oh, wait, my bad.  That wasn't Zaun, that was Heinrich Himmler, head of the SS under Adolf Hitler.  Here's what Zaun actually said, which is much in the same spirit:

I can tell you, if this material [about LGBTQ issues] was in my school, I’d be going to law enforcement.  I would be asking for a criminal investigation. I would be asking for every single teacher who disseminated that information to be held criminally responsible.  If we need to, as the state of Iowa, provide deeper clarity when it comes to that and enhance those penalties, I will do that...  My warning to all the teachers and the administrators is you’re going to be in jail.  Because this is distributing pornography.  And I will work my tail end off and it will become law.

Zaun, with the support of the President of the Iowa Senate Jake Chapman, wants to make it a felony for teachers to use LGBTQ-positive materials in their classrooms.  Even presenting same-sex relationships in a positive light, according to Zaun and Chapman, is "obscene" and should be punishable by being fired from the school, prosecuted, and jailed.

They're not alone.  A month and a half ago North Carolina Lieutenant Governor Mark Robinson came under fire for saying, "There’s no reason anybody anywhere in America should be telling any child about transgenderism, homosexuality, any of that filth."  Deborah Martell, a prominent member of the Massachusetts Republican State Committee, told a gay congressional candidate that she was "sickened" that he and his husband had adopted children together; Jim Lyons, the chair of the committee, was called upon to demand her resignation or at least an apology, but responded with a shoulder shrug, saying "not everybody views the world through the same lens."  South Carolina Senator Lindsey Graham said that he would go as far as invoking the filibuster to defeat the Equality Act, which would extend civil rights protections to LGBTQ people -- despite the fact that polls show it's supported by 70% of Americans.  Texas gubernatorial candidate Don Huffines, who is challenging incumbent Greg Abbott for the Republican nomination in 2022, said, "They’re talking about helping empower and celebrate lesbian, gay, bisexual, transgender, queer, questioning, intersex, asexual, ally, non-heterosexual behavior.  I mean really?  This is Texas.  These are not Texas values.  These are not Republican Party values, but these are obviously Greg Abbott’s values."

It's horrifying how much weight these attitudes still have in the United States.  In the last-mentioned case, instead of repudiating Huffines's repellant views, the Texas Department of Family and Protective Services responded by removing a webpage with resources for LGBTQ youth from their website.  Patrick Crimmins, spokesperson for the DFPS, said it was for "content review," and wouldn't elaborate, but reporters uncovered an exchange between Crimmins and Maria Gonzales, the DFPS's media relations director, that started thirteen minutes after Huffines's remarks became public.  Gonzales's email had the subject line, "Don Huffines video accusing Gov/DFPS of liberal transgender agenda," along with the message, "FYI -- this is blowing up on Twitter."  Crimmins responded by contacting Darrell Azar, the DFPS's web and creative services director, recommending removing the page.

Under an hour later, it was gone.

And so forth and so on.

First, you're not going to change a straight kid's sexual orientation by telling him/her about LGBTQ relationships.  To hear those people talk, all you have to do is say to a 100% straight teenage boy, "Did you know there are men who are attracted to other men?" and the boy will say, "My goodness, I never realized that!  I think I'll go out and have sex with a guy right now!"  This, of course, goes back to the thoroughly-debunked claim that sexual orientation is a choice.  Which brings up the awkward question of when the straight people sat down, weighed the options, and decided to be attracted to the opposite sex.

Secondly, no one is recommending putting age-inappropriate materials into public school classrooms, and that's not just for reasons of sexual content.  If you think a specific book is age-inappropriate for the grade in which it's being used, we can discuss that.  But that's not what these people are saying.  They're targeting LGBTQ material in particular; the message is that books presenting LGBTQ relationships in a positive light are never age-appropriate, and that all mention of LGBTQ issues should be expunged from public schools. 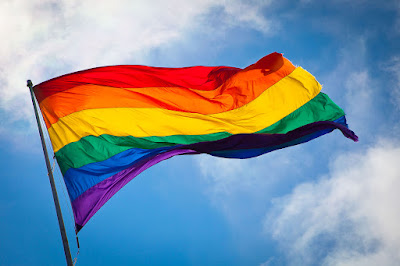 If I sound bitter about this, it's because I am.  I grew up in a time and place where the only mention of queerness was (1) by other students, and (2) as an epithet.  Although several came out after graduation -- some of them, like myself, long after graduation -- there was not a single LGBTQ kid in my graduating class who was out at the time.  The atmosphere was one of shame and fear -- desperation that no one could find out, denial of one's own identity, self-loathing, hopelessness of ever being able to admit who we were or having an authentic relationship.  By eliminating LGBTQ materials from school curricula, you're not making everyone straight; you're taking the queer kids and making them feel like an aberration.

Which, of course, is how these people view us, even if few of them say it as explicitly as Don Huffines did.

It may seem like a cheap shot that I started this post with a quote from Himmler, but when you have elected officials calling LGBTQ people "filth" and recommending making the teaching of LGBTQ issues a felony, how is it so different?  My recommendation to people like Zaun and Chapman is, if you don't want to be compared to a Nazi, then stop acting like one.

These views thrive in darkness; they grow when the people who know about them stay silent.  We have to stand up against the bigots and homophobes -- not just once, but every damn time.  Let's show that we aren't going to live up to the quote, incorrectly attributed to Werner Herzog (in fact, its origins are unknown): "America, you are waking up, as Germany once did, to the awareness that one-third of your people would cheerfully kill another one-third, while the remaining one-third stands and watches and does nothing."